The Truth Variant Is Here: Reclaim the Line. 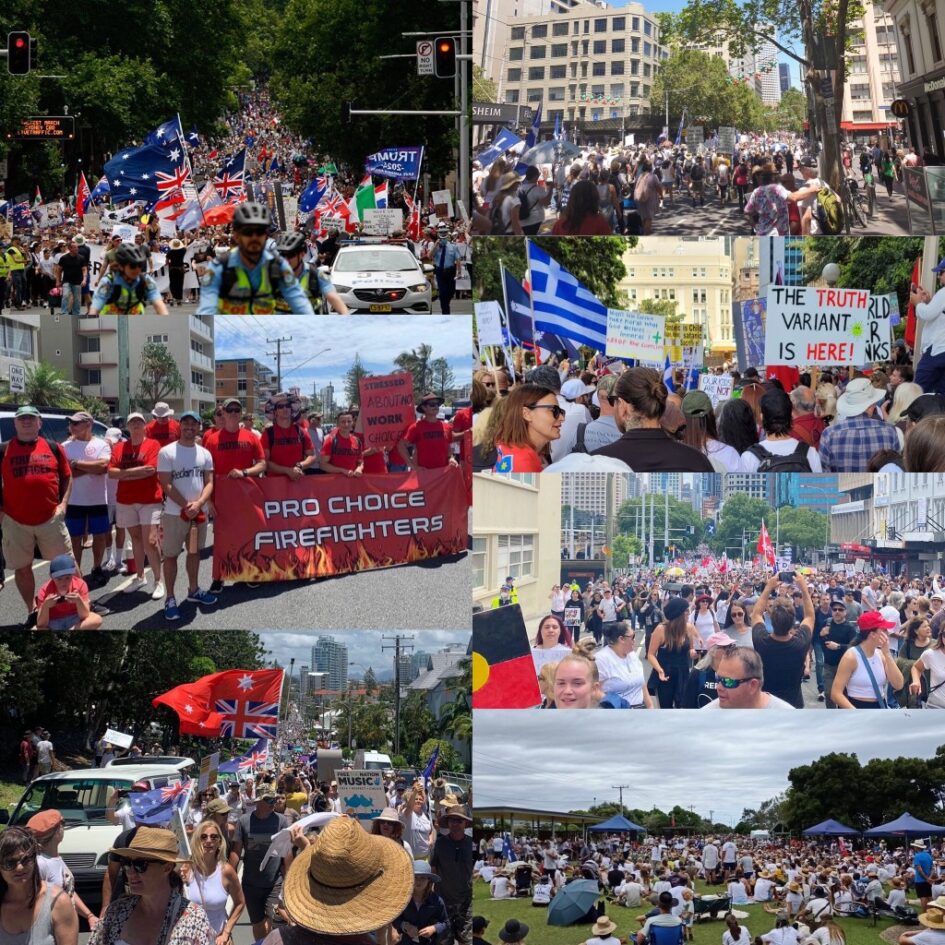 The third instalment of #ReclaimTheLine worker strikes has been held across Australia, with the music industry highlighted amidst a day of action against mandates.

As thousands of Australia’s essential workers, including teachers, nurses and police, are sacked for refusing to have “the jab”, the world’s internet swarms with horror stories of the savage impact of government overreach on the lives of ordinary people.

The Australian government has entirely lost control of the Covid narrative, and the result is chaos. The country has never been more divided. Tens indeed hundreds of thousands of Australians now take to the streets every week.

Workers from a variety of industries have once again taken to the streets for large #ReclaimTheLine demonstrations, including a day of marching, entertainment, speeches and more.

As employment mandate madness continues, now revealed NOT on the recommendation of Australia’s immunisation panel, protesters say they will continue fighting against draconian requirements that fundamentally attack the principles of a free and open society.

TOTT News has the latest coverage:

Please see below for a multi-feed experience of national #ReclaimTheLine events today:

Individual locations are found by continuing below!

In Sydney, a festival size worth of protesters marched through the streets of the CBD beating drums, blowing whistles and carrying flags from around the world.

After starting in Hyde Park, they converged on Alfred Park, where a stage was set up for speakers and live music. #FaceTheMusic was the theme of this event, highlighting mandates on the industry.

Traditionally Australians are extremely reluctant to protest publicly. Over ten thousands concerned citizens marched in Newcastle, a massive crowd by historical standards for a regional location.

The event was headlined by Craig Kelly and Aussie Cossack, the pair highly controversial figures in a country now defined by controversy.

In Queensland, large crowds gathered in Coolangatta on the Gold Coast, right near the Queensland/New South Wales border.

It came just a week before restrictions come into effect for unvaccinated people, including no entry to pubs, clubs, restaurants, hospitals unless in a birth, emergency or death situation.

That is segregation verging on the brutality of apartheid and one of the principal reasons why Australia is now descending into the status of a pariah state.

A very hot day today in Adelaide, with thousands bearing the heat to stake a stand in the CBD.

Thousands gathered in Adelaide for the another week of running protests against vaccine mandates, with particular focus from the group on media manipulation.

Photos sent courtesy of Mal at AdelaideFreedomRally.com. Head to their website if you are in the area and are looking for more information on events and the local like-minded community.

Perth held their event on 11 December, with pro-choice advocates gathering at Elizabeth Quay! in the CBD for action.

In Melbourne, crowds of protesters gathered outside the familiar location of state parliament, before walking down Bourke Street and on to Carlton Gardens for music and speeches.

Traffic was blocked off for protesters to march, while parts of the CBD were already closed for the Melbourne Marathon, which ran for the first time in two years. Despite this, a strong crowd gathered:

More locations to be added!

To keep checking back in on this piece as more media is uploaded and collated, as well as to see the original footage, go to the original story here.