We’re Asking One Question In Assange’s Case: Should Journalists Be Punished For Exposing War Crimes? 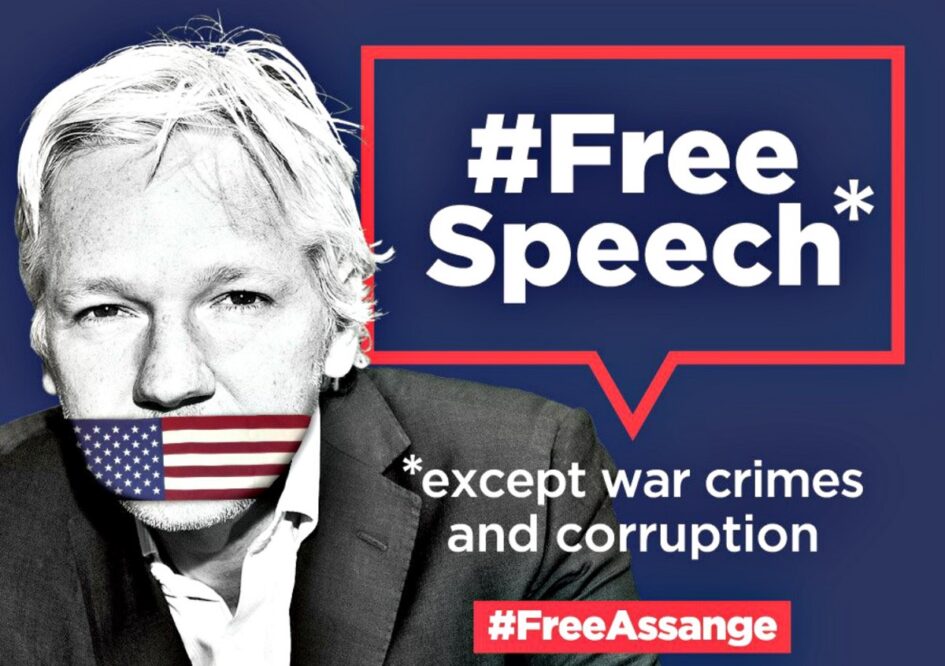 This is the transcript of a recent speech by journalist, iconoclast and all round rebel Caitlin Johnstone. Julian Assange, the founder of WikiLeaks, rots in a British prison facing extradition to the US. The geniuses in American intelligence have turned him into an international symbol of state brutality. And made him one one of Australia’s few national heroes. Nothing exemplifies the moral decay of the Australian government more than the case of Julian Assange.

In the UK a judge is starting the process of answering a very important question. It’s a question that many of us knew was the heart of this debate back in 2010, ten years ago, when this all started. It’s a question that they have been obfuscating, bloviating, huffily denying, smearing, gaslighting, and distracting from–basically doing anything they can to hide it from view.

Should journalists and publishers be punished for exposing US war crimes?

And, ancillary to that question: should we allow them to be punished by the very people who committed those war crimes?

Is that something that we want for our world, ongoing? Because our answer to this question is going to shape our society, our civilization, for generations to come.

There is no coming back from this for a very long time should the answer be, “Yes! Yes, it’s fine, war criminals should go ahead and punish journalists for publishing true facts about their war crimes.”

If we allow the answer to be yes, then the endless stupid wars that everyone wants done with, from Melbourne to Kabul, from Sydney to Syria, right across the world people are done with these stupid wars for profit.

Even the people like us who are very insulated from the effects of war want them over with, let alone the children of Pakistan who fear a sunny day because drones only fly in a blue sky, or the children of Syria whose country is being terrorized by “moderate rebels” armed and funded by the US war machine, or the starving children of Yemen who are being bombed constantly by munitions made in the good ol’ U S of A.

No one wants war except those who make big bucks from it. It’s the most evil thing that humans are capable of. It is murder. It is theft. It is rape. It targets and traumatizes and displaces our planet’s most vulnerable populations. It destroys the environment. It leaves behind cancer-causing waste.

It’s like as if the worst serial killer is going on the worst killing spree while dumping planet-killing chemicals behind him, but instead of running from the cops, he’s been given a trillion-dollar budget and immunity from prosecution.

Julian Assange’s case is a nexus point of where to next.

I was thinking on the way over here what I would most like to say to Julian if I had the chance. If I could tell him anything right now it would be, “Rest now, mate. You’ve done all you can. We’ve got you. Let us take it from here.” Assange acted as a kind of lightning rod for all this bullshit for all those years, and through what they did to him, we saw their true face. We saw their true evil. We know what they are now, and we know how they do it, we’ve seen enough to know how they operate. And in the end it’s never about one man, it’s always about the movement. It’s our job now to stand up now and say as one “We do not consent”, and carry him out of there ourselves if we have to.

This is where we’re at. We need to decide, do we evolve, or devolve? Do we pivot towards utopia, or dystopia?

The persecution of Assange is so blatantly, obviously wrong that the only thing stopping people from seeing it is empire propaganda. You don’t have to be well-read. You don’t even have to be smart. You just have to have to have eyes that are unfiltered by narrative manipulation.

Anyone with common sense and a beating heart in their chest can see this is wrong. Should journalists be tortured and imprisoned for life when they expose war crimes? The answer is not complicated. It’s obvious to anyone who hasn’t been propagandized out of their own clarity.

Assange’s plight only looks complicated when you add on layers of narrative and verbiage. “Ah but Sweden stinky, stink man, hacker not a journalist! Mueller sexist Trump poop on the walls, Nazi Putin!”

Without all the spin it’s very obvious he’s being torturously, unjustly persecuted. It really is an “emperor has no clothes” thing. The court propagandists fill our ears with fancy words about what a bad man Assange is, and why he must be dealt with, they’re trying to tell you that the emperor’s clothes are invisible to those aren’t educated.

But the unpropagandized just yell “Hey! Why is the emperor ass-dick naked? Dude, I can see him! I can see his willy! ”

This is why there are no counter protests here today. There are no regular, every day citizens taking to the streets with signs saying “Jail all the journalists! Endless war for all!” Some people still have strong feelings about Assange, but they’re just feelings, and you’ll find that it’s usually about only one or two of the smears, and if they turn and try to find evidence for the particular smears that have snagged them, they find nothing.

That’s why Nils Melzer, the UN’s Special Rapporteur on torture, is such a courageous figure to me. When people first approached him to look in to Assange’s case, he was reluctant because he too had been affected by the smears. When he turned to the evidence though, he found no substance there.

Because of his honorability, though, he felt through the embarrassment of being duped, and being wrong, he swallowed his pride and he changed course. And he very quickly became one of our most powerful allies in the fight to expose war crimes, expose propaganda, expose the modern-day mobbing and torture tactics used against Assange, and expose the precedent that Assange’s prosecution will set for journalists and publishers world wide.

And you know what? I think the power behind his testimony comes from the fact that he realized that he had been duped, and if he, a very intelligent, well read, worldly, informed and educated person could be duped, then anyone can be.

No one is immune. Human minds are hackable. We’re all very busy with our lives. We’re all kept busy by capitalism, and very few of us have the time to do what he did and sit down and take a look at the facts and assess them. And even if they did that, even fewer of them have had the courage of their convictions to put up with the social consequences of changing course.

Being manipulated isn’t immoral, being a manipulator is. People feel ashamed when they’ve been conned, but it’s not their fault; it’s always the fault of the con man. That’s why fraud is the crime, and being defrauded is being a victim of that crime.

In order for people to see this question that we’re asking ourselves–the question of whether journalists should be punished for exposing war crimes–clearly they have to admit that they have been victims of propaganda. It’s not their fault, but they will be embarrassed to admit it. This shame underpins a lot of reluctance to join us here today, so I think it’s important to outline.

So when you’re talking to your friends and family, keep in mind that they’re hurting. They’re afraid of feeling the shame of having been duped, because in our crazy, ass-backwards culture, being duped is considered shameful while duping people just makes you a productive member of society.

That’s why I find Nils Melzer’s testimony to be so powerful: because it exposes the abusive nature of propaganda, and he modeled how to act when we find ourselves on the wrong side of the debate. His very existence gives me hope because it means that there are others like him waking up all over the world.

Actually, I’ve seen it already myself. There’s a huge movement in Germany gaining traction supporting Assange. It was the prisoners of Belmarsh who organized three separate petitions and got Julian out of solitary (how’s that for grassroots activism?). Just on Friday Alan Jones posted a poll on Facebook that posed the question “should the Australian government do more to help Julian Assange and bring him home?”. Thousands of people answered and there was a 75 percent “Yes! Yes we should bring him home.” Underneath the poll there were hundreds of comments in support of Assange.

So the tide is changing. Is it enough? I reckon it might be. But we have to keep pushing on it like our lives depend on it, because they do.