Who’s Above The Law? Politicians, Judges, Military and Intelligence Officers 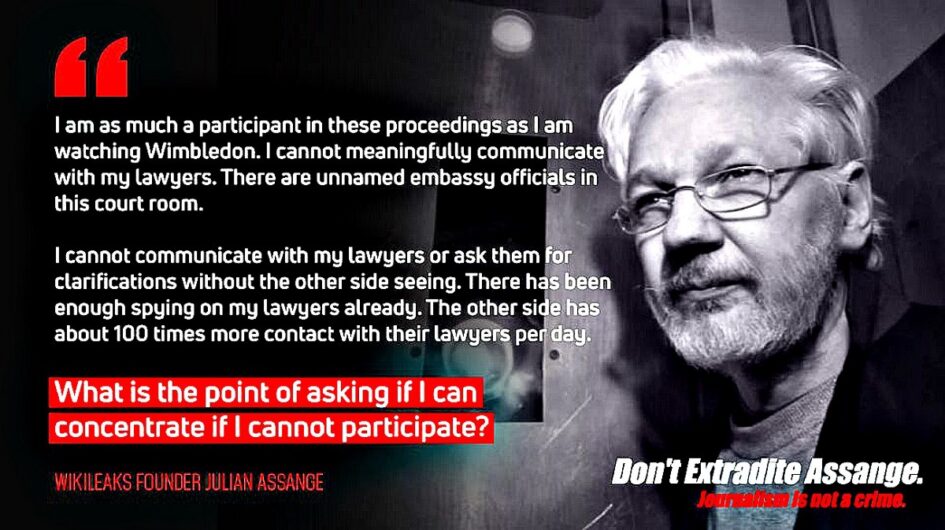 Alison Broinowski and the Case of Julian Assange

Justice is on trial in London.

Lady Arbuthnot, the Chief Magistrate in the extradition case against Julian Assange, says ‘no-one is above the law’.

Emma Arbuthnot’s husband Lord James Arbuthnot, who between 2005 and 2014 chaired the UK Parliament’s Defence Select Committee, overseeing Britain’s military operations in Afghanistan, Iraq, and Libya, is apparently above the law. So is Tony Blair.

So are all the allied leaders whose forces invaded Iran and Syria. Thus far, so are the troops who committed war crimes in Afghanistan, and in other countries.

They are the ones who should face the music. Instead, Julian Assange who since 2010 has been exposing these and other crimes, is the one in court.

For the leaders it’s not about Assange. He has to be made an example of, to stop more people telling the truth about their wars, which kill hundreds of thousands. The truth didn’t kill any of their spies. It embarrassed them.

So they use the justice system to protect themselves from more embarrassment. They want to accuse anyone anywhere of espionage against the United States, but they won’t extend the First Amendment to them.

The justice system of three common law countries is on trial here, and the presumption of innocence.

But Australia is waking up. Crowds are gathering in London and in Australian cities. A petition with 280 000 signatures has been sent to the Federal Parliament. That would trigger a debate if it were in the House of Commons.

A Parliamentary Friendship Group is calling on the government to Bring Assange Home. It’s led by George Christensen and Andrew Wilkie, who has just spent several hours with Assange in London.

In past cases, three sets of voices were raised in Australia: the politicians, the media, and the people. David Hicks came home from Guantanamo Bay, Schapelle Corby and Renae Lawrence from Indonesia, James Ricketson from Cambodia, Peter Greste from Egypt, and Hakeem al-Araibi from Thailand. Jock Palfreeman is still in Bulgaria, and Kylie Moore-Gilbert in Iran.

If we could go to great lengths for them, why not for Assange? He’s not even a drug trafficker, just a journalist who published the truth about the US and its allies.

It’s not only journalism that’s on trial in London this week. It’s what our politicians go on about, until it applies to them: the rule of law.

This text is from a speech delivered by Alison Broinowski at NSW Parliament House.