Slush Funds: How the Australian Government Ramped up Grant Rorts 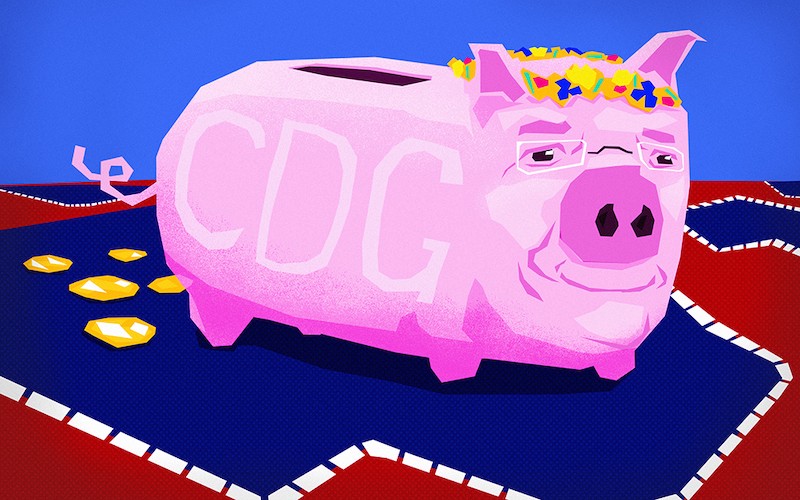 They cut domestic violence funding and National Parks, froze Australia’s unemployed welfare payment known as Newstart, and consigned the most needy to cashless welfare cards while spraying unprecedented billions in “invitation only” grants — our taxpayer dollars — at political targets.

The failing Australian government is mired in scandal. Below is a forensic analysis of four budgets and Mid-Year Economic Financial Statements bylongtime public servantJommy Tee, who has found pork-barrelling endemic; another $1.7 billion in “top-ups” under the Community Development Grants scheme, some 70 percent of which went to seats held by the ruling Coalition, and a huge chunk to Home Affairs Minister Peter Dutton’s electorate.

With almost all of Australia’s mainstream media now either co-opted or manipulated by government, and the conservatives having passed rafts of anti-free speech legislation under the guise of national security, anyone still interested in quality journalism is looking towards the margins.

A Sense of Place Magazine is pleased to republish by arrangement this investigation by Australia’s leading investigative news site Michael West Media.

Rorting by Invitation Only

“Only projects identified by the Australian Government will be considered for funding under the CDG Programme, including the Government Election Commitments since 2013 and other government initiated projects.

“The CDG Programme is a non-competitive grants program. If your project has been identified to receive grant funding you will be contacted by the Australian Government.”

The guidelines for the Community Development Grants (CDG) program read as a confession — and they are — the program is a slush fund. It was set-up to institutionalise public funding for political and partisan electioneering outcomes.

The last budget revealed a staggering $2.5 billion of funding slushed around in the CDG coffers since it began — funding nearly 1,000 projects. The largest grant being $35 million for a project based around Home Affairs Minister Peter Dutton’s marginal electorate of Dickson. Approximately 70% of grants awarded went to Coalition-held seats.

Most of the plunder — in fact a jaw-dropping $1.7 billion — has been deposited since the 2016 election.

The rot appears to have set in when Scott Morrison, and his former chief of staff, Phil Gaetjens, took control of the Treasury portfolio in late 2015.

This is a program where only the Government’s hand-picked projects are invited, approved and funded and, as such, is a nightmare for the usually responsible bean-counters in government.

An investigation by Michael West Media found hundreds of million of dollars in top-up grants were slyly announced in the budget’s lesser known sibling, MYEFO, the Mid-Year Economic and Fiscal Outlook statement which is published each year in December.

This slush will continue for at least another two elections as the CDG program runs through until 2025–26.

So what did the CDG program fund?

Officially, the CDG provides funding for “critical” projects where the Government has identified the need for new or upgraded facilities. Projects range from new sporting facilities to upgrading community centres and small-scale infrastructure projects.

How “critical” are these programs? Just about anything and everything has been funded including all manner of things associated with planes, trains and automobiles, tourism precincts, and a few lucky private companies — and lots of sporting facilities. One would have thought the Government had had enough sporting grant programs to show its sporting largesse — but apparently not.

As the guidelines of the program make clear, the Government issues the lucky grantee with an invitation and then the funding magically flows in a seamless fashion, although it can take some time for the grant to materialise.

The CDG program started life after under former Australian Prime Minister Tony Abbott when a relatively modest $340 million was tipped into it.

Then Scott Morrison became treasurer in September 2015 and, after hiring Phil Gaetjens to run his office, the program levitated to stellar heights.

To put on a show in the election big top, a show which dealt out promises large and small to entice support for the Government, required both an ad man ­– come on down Scott Morrison — and a walking abacus — come on down Phil Gaetjens.

Morrison’s marketing skills were well honed prior to his tilt at Parliament when he headed up Tourism Australia from 2004–06. Yet his time at Tourism Australia ended mysteriously and abruptly when his employment was terminated. In 2008, the Auditor-General released a report that was scathing of the way in which taxpayers money was spent at Tourism Australia, including the period when Scott Morrison was in charge.

Gaetjens, having spent close to a decade as chief of staff to former treasurer, Peter Costello, and then as NSW Treasury Secretary, returned to the federal fold to become Morrison’s right-hand man. A highly experienced numbers man who knew Treasury procedures and the power of budgets to deliver election promises now complemented the marketing instincts of Morrison.

Under their guidance, the CDG morphed into a vehicle delivering hundreds of apparently partisan pre-election commitments during the 2016 and 2019 election campaigns.

An election tomorrow — look over there!

An examination of budget documents and MYEFO statements suggests that regular program top-ups coincided with the election cycle. In short, a vaudevillian act, wowing punters every three years with promises and delivering the funding through the lesser-analysed MYEFO fine print.

Let’s review the last two performances of this extravaganza: the federal elections of July 2016 and May 2019.

Like pulling a rabbit out of a hat, Morrison as treasurer in 2016, conjured up $586 million after the July 2016 election — a 171% increase from the original pot of gold. The announcement came in December’s MYEFO. No sawing a lady in half here. It’s all about multiplying — after all, winning elections comes at a cost.

According to an associated budget document, Regional Australia — Driving Our Economy 2017–18, a total of 450 projects were funded in the 12 months after the 2016 election.

We’re on the road again

Exhausted from materialising bloated bunnies, the CDG stars took a reprieve until the show was rolled out again ahead of the 2019 election.

However, by this stage, Morrison had appointed Gaetjens as treasury secretary just before he himself emerged from behind the leadership curtain as prime minister in August 2018.

With Morrison now as PM, his loyal former chief of staff was responsible for helping his new treasurer, Josh Frydenberg, perfect more tricks and craft the 2018–19 MYEFO and 2019 election budget.

The CDG was not overlooked. The 2018–19 MYEFO produced a further $177.7 million out of thin air. But to ensure the punters could enjoy the miracle of further local funding in their electorates, the 2019–20 budget, delivered just weeks out from the election, refined pork-barrelling to an art form. It announced another $492.6 million available under the CDG, effective from 2018–19.

The success of the CDG also spurred imitators, and a different style of production was adopted.

The 2016 election result had been a bit too close for comfort, so why not create a franchise of shows? From the December 2016 MYEFO through to the pre-election 2019 budget, an unprecedented slush of money — currently the subject of rorting allegations –materialised.

The genesis of the new funding and massive top-ups all occurred when either Scott Morrison was treasurer or Phil Gaetjens was treasury secretary. The biggest raid on the public purse was the 2019 election budget, which delivered just shy of $4 billion to:

A re-filled treasury-chest-cum-war-chest comes in handy ahead of an election. Whether colour-coded spreadsheets and the prime minister’s office were involved in this chicanery is yet to be determined.

A magician never reveals their tricks, or so the saying goes.

One of the reasons the funding of the CDG has been difficult to trace is that funding boosts are difficult to track. Often funding was allocated under a different name (or as magicians like to say “misdirection”) and from budget savings elsewhere in government.

Let’s take a look at misdirection. This was used for the 2016–17 budget process. The budget of that year contained no announcement about topping up the CDG. We would only find out about the top-up in December’s MYEFO. Even then, the headline attraction was not badged as CDG, rather the alias of “Community Infrastructure Projects” was used. Only on reading the fine print does one discover this was a way of channeling another $586 million to the CDG.

Likewise, aside from the 2019–20 budget when the stakes were desperate with the Government lagging in the polls and expected to lose office, all the massive top-ups to the CDG were announced, away from prying eyes, in MYEFO.

Additionally, not all the grants awarded under the program are accessible from the one data source, they are scattered across official government documents. The GrantConnect website and pre-July 2017 grants must be sourced from one of the secondary websites hosted by the Department of Infrastructure.

A number of these top-ups were also funded through cuts to other areas of government expenditure.

In short, pre-election promises and campaign war chests were established at the expense of cutting other, perhaps more worthy, programs.

What the critics say

The Auditor-General, as recently as 2018, looked at the CDG and gave the Infrastructure Department ­– which nominally administers the program on the Government’s behalf — a moderate rebuke in the way it ran the program.

Nonetheless, according to the Auditor-General, the Department was found to be fundamentally inadequate in addressing the project benefits criteria when it briefed ministers. The audit found that the Department’s briefing simply parroted the claims of the applicants.

Tellingly, the auditor states: “Briefings provided to Ministers recommending that funding be approved for candidate projects did not inform the decision-maker whether the three appraisal criteria for the program had been met in full, in part or not at all.”

No-one could be shocked by the auditor’s finding as the program guidelines enable invited applicants to help themselves to money the Government had already promised during election campaigns.

Nevertheless, the stench of rorting is strong.

Future Rorts: Why buy one election when you can buy three? – Michael West
In late October 2019, a notice of a grant opportunity appeared on the government’s GrantConnect website – the website…www.michaelwest.com.au

Jommy Tee is a long-time career public servant, having worked in the policy development field for 25+ years as well as an independent researcher interested in politics, current affairs, and Nordic noir.

This article was originally published in Australia’s leading investigative news site Michael West Media and is republished here with their kind permission.