The Left and Right Should Unite to Fight Lockdowns. The Best of 2021. 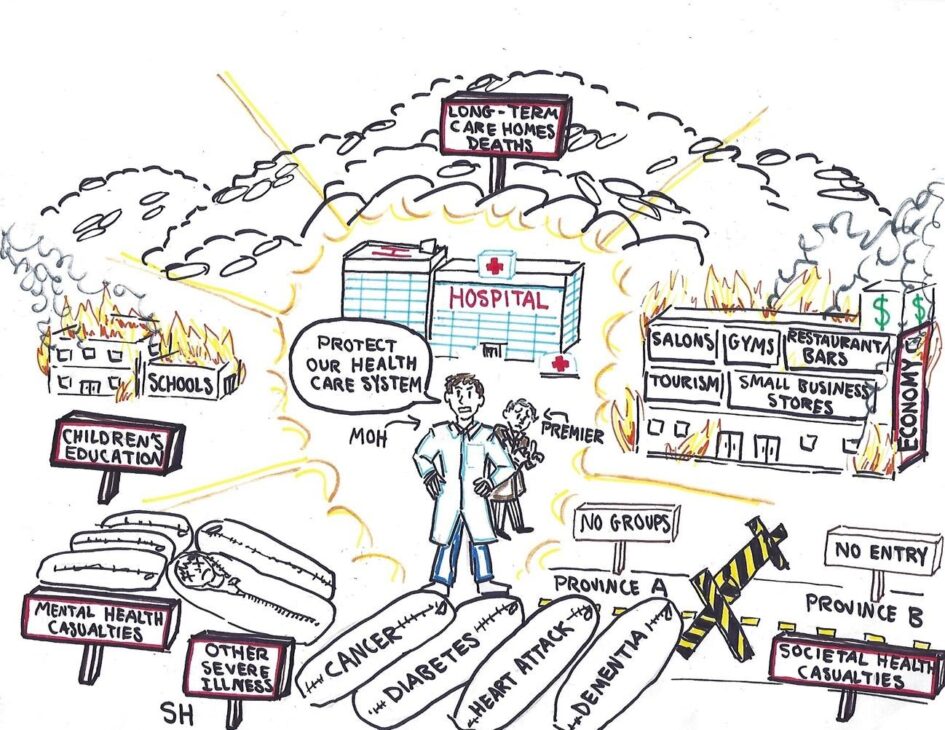 Unable to prosecute their case on data and logic, zero-Covid zealots have descended to discredit-by-labelling.

One Australian columnist berated ‘commentators who often have more opinions than brains’. No, he wasn’t looking into a mirror but referring to ‘reactionary’ critics of Australia’s lockdown and financial profligacy.

Another believes ‘the extreme right of the “give me liberty or give me death” variety is taking its lead from … publications such as The Spectator’ with a ‘let it rip’ strategy. ‘Its commentary borders on the deluded’.

Oh dear! An occasional Spectator Australia writer, I’m a centrist on some issues, right-of-centre on others and left-of-centre on still others.

A popular witticism in Mao’s China defined a deviationist as someone who kept going straight after the Party veered sharply left or right.

Once-progressive views – people should be judged on character and not skin colour, the only race that matters is the human race, the way to end racial discrimination is to stop discriminating on the basis of race, all lives matter equally – are now a reactionary credo of right-wing white supremacists. Being non-white is no defence.

Human rights are under attack both from the right fighting Islamist terrorism and the left promoting identity-based anti-discrimination.

The rule of law, due process and presumption of innocence are endangered notions: think Cardinal Pell.

Like Churchill I hold that socialism ensures the equal sharing of misery but capitalism produces unequal distributions of blessings.

Governments are responsible for public goods and equality of opportunity but should leave outcome differentials to markets, talent, enterprise and work.

To ensure social equity for all, state capacity must be strengthened. To protect political and economic freedoms, state power must be circumscribed.

On Covid-19, libertarians object to the infantilisation of citizens, growth of the nanny state, unaccountable state power and unchecked police actions.

Illiberal lockdown fetishists believe their safety requires coercing fellow citizens into accepting the judgment of health bureaucrats and ministers with no skin in the game.

Is being concerned about bankrupted businesses right-wing?

Those whose lives have been destroyed by constantly shifting and inconsistent rules with little basis in science, include small business owners whose talent, capital and daily grind help pay mortgages, school fees and employees’ wages.

Behind every shuttered shop window lies a family story, perhaps a family home lost as collateral for a loan.

When a Manchester cafe owner reopened just to survive, cops punched him.

Testifying to the growing confidence in complete immunity of thugs in uniform despite the ubiquitous phone camera and widely shared videos, authorities have charged him with assaulting police.

The ‘let it rip’ strawman is a figment of critics’ imagination. ‘Mainstream sceptics’ (is that an oxymoron?) don’t deny Covid is real, but highlight history, perspective, balance and proportionality. The scientific consensus until 2020, written into pandemic preparedness plans like the UK’s, rejected lockdowns.

The consensus was sacrificed on the altar of flawed mathematical modelling with an appalling track record.

They’ve proven to be catastrophically wrong in both worst and best-case estimates for the UK, US, Australia, Sweden and so on.

The experience of an authoritarian government in Wuhan should have come with health warnings on data reliability and brutal suppression methods.

An article in the European Journal of Clinical Investigation (4 January) by Stanford University experts shows that, between less restrictive and harsh interventions, net harm vastly exceeds net gain for the latter.

From the left-liberal perspective, the evidence of harms from harsh lockdowns is overwhelming on health, wellbeing, economic, employment and poverty measures. Bad enough for the working class in Western countries, lockdowns have been deadly for the poorer countries and will continue to be so for the next decade.

In an academic article in Ethics & International Affairs (Fall 2020), I noted the pandemic shows the folly of privileging national security over human security. How awfully right-wing. In the post-pandemic budget handed down on 1 February, India increased health spending by 137% to over US $30bn.

The massively under-funded sector had previously accounted for only 1.3% of GDP. A national health service exists to protect the people. To deflect from years of criminal neglect, governments have launched massive propaganda to convince people it’s their patriotic duty to protect the NHS instead: your fault if you fall sick. Talk of victim-blaming!

Consider the inspirational Captain Tom Moore who died recently aged 100. Sick with pneumonia, he tested negative for Covid when hospitalised, got infected in hospital and died, illustrating the brutal reality of nosocomial deaths. On 29 January, authorities revealed that nearly half the total UK death toll of 220,000 was from non-Covid causes such as cancelled operations.

Who’d have thought the left would champion censorship by profiteering Big Tech and cheer Big Pharma, enthusiastically endorsing the privatisation of profits as governments competed to sign multi-billion dollar contracts in advance at guaranteed prices; and the socialisation of risks as drug companies were granted immunity from liability for vaccines going wrong like thalidomide?

On 23 December, Forbes published a list of 50 doctors, scientists and healthcare entrepreneurs who became new pandemic billionaires in 2020 – including nearly three dozen in China.

Remember the class action case in Australia in 2009? Court documents revealed US drug giant Merck had prepared a ‘hit list’ of doctors who criticised Vioxx for its deadly cardiovascular side-effects, with the labels ‘discredit’, ‘neutralise’ or ‘neutralised’ against their names. You’ll be shocked, I’m sure, to learn that on 4 February, Merck – which makes patent-free low profit Ivermectin and has been selling it for years – released a statement questioning both its efficacy and safety.

Professor Ramesh Thakur is a former Assistant Secretary-General of the United Nations and is Emeritus Professor at the Australian National University. He has authored or contributed to more than 50 books. His work on Covid-19 has been published in leading journals and newspapers around the world. He is one of Australia’s most distinguished academics.