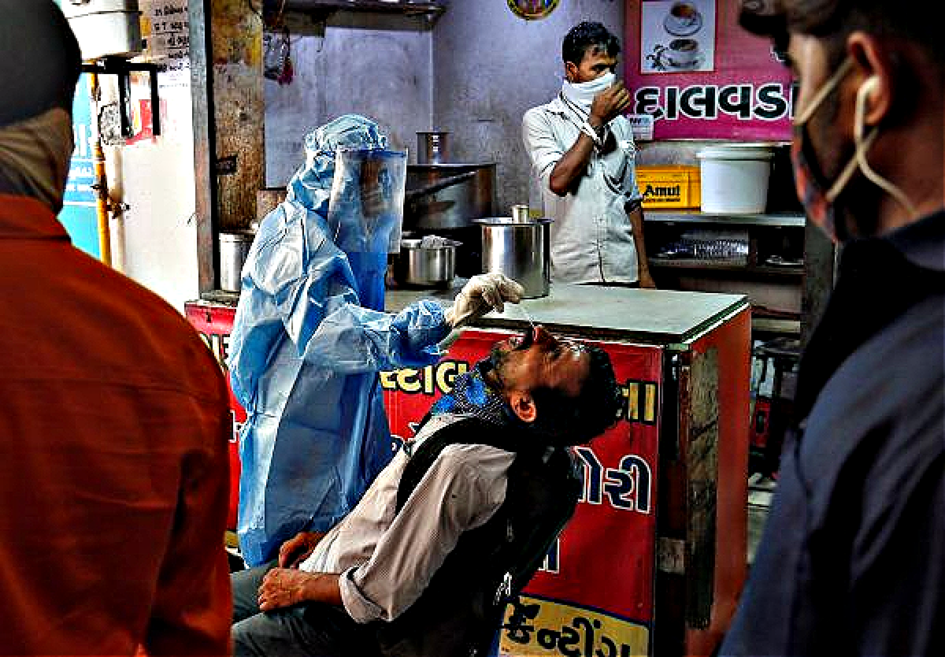 On 15 September, India had over 5.1 million COVID-19 infections, behind only the United States; and 83,000 deaths, behind the United States and Brazil. The country recorded a mortality rate of 60 deaths per million, compared to 26 for its neighbours in South Asia and 11 in Asia.

The real toll might even be higher — some Indian states are undercounting COVID-19 deaths by attributing them to comorbidities, while others have weak health surveillance systems.

There are reports of discrepancies between official death tolls and counts from crematoria and burial grounds. The vast majority of Indians die at home, with last rites performed by the family. Widespread alarmism has led to stigmatisation of the virus, with some doctors and young Muslims being refused burial for fear of contagion. Families may be reluctant to take sick relatives for testing and hospitalisation, and many who succumbed to the disease have likely been cremated or buried quietly to avoid social stigma and ostracism.

On 25 March, India imposed total lockdown with just four hours of notice and no logistical preparation. Its lockdown stringency was rated 100 by Oxford University’s Blavatnik School, compared to France’s 88, Germany’s 77, Italy’s 92 and Vietnam’s 58.

COVID-19 ranks only 18th among India’s biggest killers, well behind heart disease, lung disease, tuberculosis, diarrhoea, diabetes and traffic accidents. Of the 139,123 suicides in India in 2019, daily wage earners (25 per cent of the workforce) made up 23.4 per cent, up from 12 per cent in 2014. The unemployed made up another 10.1 per cent. One shudders to think what the 2020 numbers will be.

India has plummeted from the world’s fastest growing major economy to the fastest shrinking. GDP contracted by 23.9 per cent in the April–June 2020 quarter, the worst slump since India started publishing quarterly data in 1996 and the biggest drop in the G20. Unemployed migrant workers trekked home on foot during this time, leading to the tragic death of 12-year-old Jamlo Madkam. Some were sprayed with chemical disinfectants and many were harassed and extorted by corrupt police officers.

As they’ve returned home, migrant labourers have spread the disease deep into India’s village heartland. India now has the worst of both worlds and is yet to recover on either the virus or the economy fronts. Housing, water and sanitation realities are a nightmare for any epidemic that is both highly infectious and lethal. Physical distancing is impossible in slums where generations of families sleep in one room, eat together and share communal water and sanitation facilities.

On 30 May, despite a record daily rise of almost 8000 cases, India announced a substantial easing of lockdown restrictions because the rise in deaths and misery caused by the lockdown was reckoned to be worse. India is now moving ahead with Unlock 4. Other poor countries have also concluded that lockdowns are not worth the economic pain. In low-income countries dominated by daily wage labourers working in the informal economy, many ‘fear hunger may kill before coronavirus’.

In Europe, Asia and the United States, the effectiveness of lockdowns remains contested. One Lancet study concluded that ‘rapid border closures, full lockdowns, and wide-spread testing were not associated with COVID-19 mortality per million people’. Comparing US states, another study found lockdowns did not contain the spread of the virus and opening up did not exacerbate it.

In addition to achieving herd immunity through a vaccine or the spread of the virus, scientists have been looking at the role of antibodies and pre-existing cross-immunity through T-cells in people never exposed to COVID-19.

The discrepancy between the recent spike in infections amid a fatalities plateau seen across Europe and the United States is striking. The rise in infection numbers could be an artefact of increased testing, or perhaps herd immunity has been achieved in some countries at the unexpectedly low threshold of 20 per cent of the population being infected. One study showed the infection rate in Mumbai slums was 57 per cent, compared to 16 per cent in other areas — but the slums lacked commensurate fatalities, potentially indicating a low herd immunity threshold in Mumbai also.

Nobel Laureate Michael Levitt postulates a ‘self-flattening curve’. Oxford Professor of theoretical epidemiology Sunetra Gupta observes that rates of infection and mortality are strikingly similar across countries with different lockdown policies, suggesting case numbers are better explained by pre-existing cross-immunity to related coronaviruses than lockdowns. Europe and the United States seem to offer more support for this thesis than for the original modelling that predicted indefinite exponential growth, with cases doubling every 3–5 days without stringent control measures.

Yet it’s hard to see evidence of such self-flattening in India — or in Peru, which went into lockdown around the same time. Peru has now recorded 31,000 deaths and a mortality rate of 932 per million, despite maintaining restrictions.

India’s economic slowdown began long before the pandemic hit, and there was little to cushion it from the lockdown’s harsh impact. The neglect of urgently needed economic and governance reforms in order to pursue a religious nationalist agenda left the country exposed to the exogenous shock. India’s hospital bed capacity is only 20–25 per cent of Western countries, and it has neglected primary frontline care.

India needs to urgently upgrade its rickety public health system. There is a scandalous scarcity of epidemiologists, microbiologists, biostatisticians and research institutes with the expertise to trace the origins of the virus, its spread and capacity gaps in the public health system. India could become ‘the global nerve centre of … multinational supply chains in the post-COVID-19 world’ as per Prime Minister Narendra Modi’s dream, but only if he acts decisively on economic and governance reforms.

Ramesh Thakur is Emeritus Professor at the Australian National University and a former UN assistant secretary-general.

This story was originally published in the East Asia Forum and is reproduced here with the author’s kind permission.