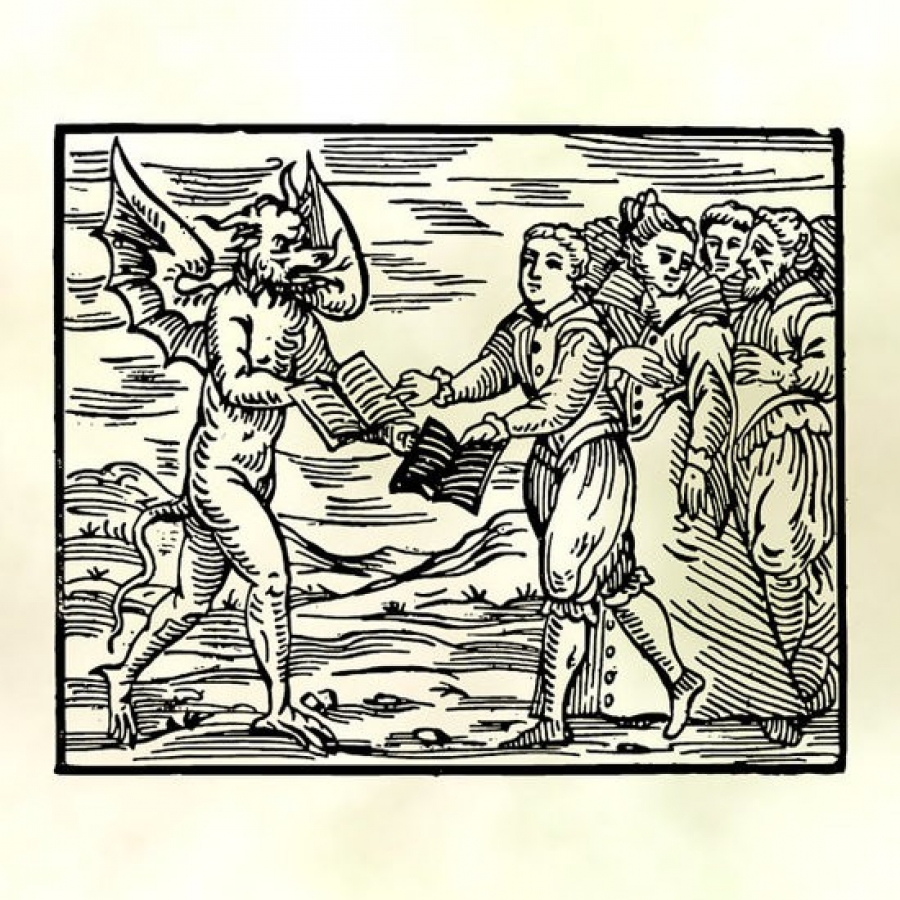 Individual rights, traditionally conceived, exist prior to, and separate from, the State.  Not any more, in the age of Covid and lockdown, all that we previously accepted about government has been discarded.  And we did it.  It is a Faustian bargain.

For those of us not entirely convinced by either the morality or wisdom of the strategy of imposed tyranny of the past year, one of the enduring conundrums of Covid madness has been – how did it all come to pass?

How did the Chinese pull off the destruction of the Western economy and way of life?  Why did Western governments reject forty years of medical scientific consensus, for example in relation to masks and lockdowns?  Why did people willing give up their not-so-sacredly held freedoms?  And re-elect tyrannical governments?  Why did we so easily take to wearing masks, to giving up the Mass, to giving up the pub, to giving over personal information to the State, to dobbing in neighbours for “bad” behaviour, to the abandonment of hugging our loved ones?

Why did we embrace mini-tyrants like Daniel Andrews, who sooled his corrupt VicPol military police attack dogs onto innocent citizens?  Why did the West abandon dissent?  What has happened that caused once informed and steely citizens to simply throw their hands in the air and say, all right, we give in?  Or worse, to believe, apparently sincerely, that our governments are motivated by compassion and good sense.

There have been Faustian bargains aplenty this past year that have underpinned the madness.  Politicians and voters have each done deals with the devil.  And with one another.  And there has been a society-wide suspension of disbelief.

One essential, unstated pact has overridden all the others.  It is the pact between venal, self-serving politicians and suppliant, self-interested citizens.  The shared characteristic of each of the parties to the diabolical pact has been the willingness of each to pretend that things that are not real are real.  The State pretends to “protect” its citizens.  The punters pretend that this is all genuine, and that if we all play our part, all will be well.

The State writes the cheques.  We cash in.  Some have indeed bought into the fear narrative, unconditionally.  Others simply figure out how to gain.  Witness the self-serving, perhaps in some cases, corrupt, behaviour of corporates sucking up the JobKeeper cash, the willing parking of individual rights by the cashed-up beneficiaries of State largesse, the hand-on-dick totalitarianism of pathetic, attention-seeking State premiers and associated petty bureaucrats clinging to their coattails, the opportunities spied for a place in the sun by those who previously had no such place.

It is all a game.  And each party gains something.  The triumph of theatre, optics and management over principle.  Of bargaining over rights.  What a cynical place the world has become.

The three great fathers of modern political science, Hobbes, Locke and Rousseau, laid out a theory of the social contract, one in which the rights of individuals that they identified were prior to the state.  The theory needs to be updated in the age of Covid.  We the citizens, scared witless, agree to give up previously precious and tightly held rights over our private domain to the virus-slaying State.  We now inhabit a world in which our no longer inalienable rights – God-given? – are replaced by a codifed set of allowable rights handed down by governments.  Codifed rights that are heavily contingent and subject to change at any time.  A regime, as in the case of mandated vaccines that allow certain people to be allowed to access certain activities, in which freedoms can be “traded” away for other freedoms.  To boot, it is all based on a fiction – that government can stop viruses – but that doesn’t seem to matter.  So long as we get our cut.

This capitulation in the face of a State power grab represents a whole new phase in human history.  The Russians gave up in 1917.  The Chinese meekly surrendered to the murderous Mao.  The Germans gave Hitler democratic power, then lost the lot.  Now Westerners have decided, equally meekly, to allow their elected leaders to rewrite the rules of democratic government.  This has been a bargaining process, admittedly without formal consent.  Election results manifestly suggest a consummation of the implicit deal.  This is, to use a much over-used phrase of the past year, “unprecedented”.

The lingering, unanswered question of the few (apparently) freedom-loving sceptics is, of course – how did we get here?

The State has grown inexorably over the last century.  With its associated emergence of the managerial class of experts who both wish to run the world and believe it is their right to do so, based on their enlightened views and technical knowledge.  Look at the Tech Nazis.  Mission creep.  The softening up process has nudged the punters towards acquiescence in the face of slowly growing government control of our lives.

The best account of the process remains Hayek’s The Road to Serfdom, written by the great Austrian economist and philosopher of freedom in the shadow of World War Two and the emerging Soviet Empire.  The image that best captures Hayek’s thesis is that of the slowly boiling frog.  The tyranny most likely to succeed is that which promises utopian outcomes on earth, in our interests and with benign intent and methods.  Give us a little more power, and we will look after you.  From cradle to grave.  Trust the State.

The most recent exemplar of this approach has been the fear campaign over climate change.  This campaign of lies has convinced a sizable proportion of the West – governments, bureaucracies, corporates, innocent believers, fellow travellers, useful idiots – that we face catastrophe.  Embedded narratives can be powerful, for the low information citizen.  This has been the perfect dress rehearsal for the Covid panic.  Convince the people that there is a threat, and we have the answer.

And we fell for it.

The one political philosopher I didn’t mention earlier is Machiavelli.  He explained how to do it.  And his modern Branch Covidian followers have learned well.  Adam and Eve fell for the snake’s appeal to their “reason”.  They subsequently lost the lot.  There is a lesson in the Genesis story.

What did Faust actually do?  Here is one definition:

Faustian bargain, a pact whereby a person trades something of supreme moral or spiritual importance, such as personal values or the soul, for some worldly or material benefit, such as knowledge, power, or riches. The term refers to the legend of Faust (or Faustus, or Doctor Faustus), a character in German folklore and literature, who agrees to surrender his soul to an evil spirit (in some treatments, Mephistopheles, or Mephisto, a representative of Satan) after a certain period of time in exchange for otherwise unattainable knowledge and magical powers that give him access to all the world’s pleasures. A Faustian bargain is made with a power that the bargainer recognizes as evil or amoral. Faustian bargains are by their nature tragic or self-defeating for the person who makes them, because what is surrendered is ultimately far more valuable than what is obtained, whether or not the bargainer appreciates that fact.

It sums up the last year rather prettily.  Fits the Covid bill, n’est pas?  It isn’t pretty.