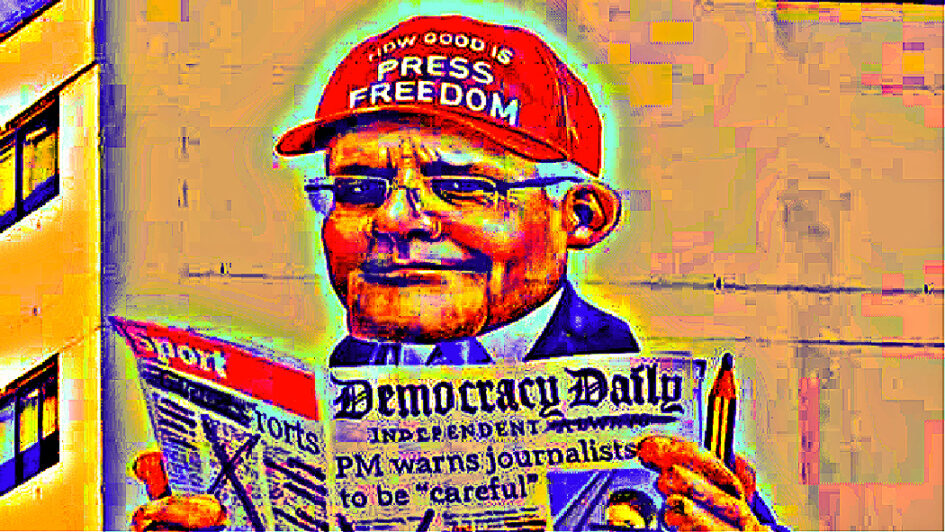 When the Australian Federal Police (AFP) raided journalists and media organisations two years ago, it showed the balance between national security and journalism is severely out of whack in Australia.

To address this, a Senate inquiry into press freedom was launched. Its report, released this week, made 17 recommendations — many of which go much further than previous inquiries into media freedom.

This week’s report acknowledges, across party lines, the imbalance between national security and public interest journalism in Australia.

The ABC reported this week the Senate inquiry found “government agencies should have to prove ‘real and serious’ harm caused by the publication of classified intelligence and information before a criminal investigation can be launched”.

Without such a requirement, the provisions would be susceptible to overuse, misuse or even abuse. In particular, the absence of an express harm requirement can lead to circumstances where a journalist is prosecuted for a very minor or trivial ‘dealing’ with classified information.

When giving evidence to the inquiry, the Australian Security Intelligence Organisation (ASIO) was asked to provide any examples of when a publication had demonstrably harmed Australian national security. ASIO could not produce a single example.

The report acknowledges the attorney-general is reviewing the powers granted to our intelligence and security agencies and the effect they have on media coverage of national security.

But that’s not all. The report also acknowledges a point made by several submissions that Australia stands out in the international community when it comes to the powers granted to its intelligence and security agencies.

It quotes a submission from myself and Denis Muller, a senior research fellow at the University of Melbourne’s Centre for Advancing Journalism, asking why Australia is the only country among mature liberal democratic countries

[…] that sees a need to equip its security and intelligence agencies with powers that extend to issuing and executing search warrants against individual journalists and media organisations justified by hunting down public interest whistleblowers in the name of national security?

This week’s Senate inquiry recommendations follow a similar report handed down last year by the powerful Parliamentary Joint Committee on Intelligence and Security (PJCIS). That committee also recognised, across party lines, that an imbalance between national security and media freedom — favouring security and secrecy — had grown since the 2001 September 11 terror attacks in the United States.

However, the PJCIS report recommended what some committee members described as the bare minimum to address the imbalance.

This week’s Senate inquiry report is different. It takes into the account the PJCIS recommendations, but its language is more pointed and urgent.

Freedom of Information and ‘a culture of transparency’

The report points out that Australia’s federal Freedom of Information (FOI) laws don’t deliver on their objective of facilitating independent access to government-held information.

It recommends the government works with the Office of the Australian Information Commissioner (OAIC) to promote a culture of transparency.

It’s a noble sentiment. The problem is consecutive federal governments, since 2013, have starved the OAIC of resources. There was money in the recent federal budget for a separate freedom of information commissioner operating out of the OAIC. However, overall OAIC resources remain too small to enable them to do their transparency advocacy work properly.

It would also help if our intelligence and national security agencies were actually covered by the FOI Act, which they currently are not. This is another way Australia sets itself apart compared with most other mature liberal democracies.

The report focuses considerable attention on the plight of whistleblowers. Instead of being thanked for their courageous disclosures of corruption and maladministration, our current legal framework allows governments to pursue and threaten them with disproportionately long jail terms and fines.

The report recommends thorough reforms of our public interest disclosure laws to achieve what they were supposed to do (but currently do not): protect whistleblowers properly.

The government’s senators who joined this inquiry appended a dissenting view pointing out they could not agree with all the recommendations, given some of them were already being acted on based on the PJCIS report.

The Greens appended a section suggesting a Media Freedom Act. This act was suggested by a number of submissions to the inquiry.

The act would address the lack of a Bill of Rights in the Australian Constitution safeguarding freedom of expression and media freedom. It would work as a counterbalance when the government considered any legislation that would impede media freedom and independence.

It’s a pity the committee could not agree on this recommendation across party lines. It would have been the most effective and comprehensive way to deal with the issues at hand.

Read more: Australia needs a Media Freedom Act. Here’s how it could work

It was good to see some relative newcomers submitting and giving evidence to the inquiry. However, old-timers like myself and many colleagues who have been making the same points for the past 20 years hold little hope that federal governments led by any of the major parties will walk the talk.

This somewhat jaded view is aptly justified by revelations that in 2018-19, about half of FOI requests for non-personal information submitted with the Department of Home Affairs were not finalised within the time limit. Despite that, Home Affairs department secretary Michael Pezzullo described the FOI section’s efforts as “commendable”.

There remains a troubling imbalance between government secrecy and journalists’ ability to do their job as independent watchdogs.

The federal government now has a comprehensive blueprint on how to become more open and transparent on all levels, including national security.

It’s time to walk the talk — but I’m not holding my breath.

Read more: Explainer: what did the High Court find in the Annika Smethurst v AFP case?