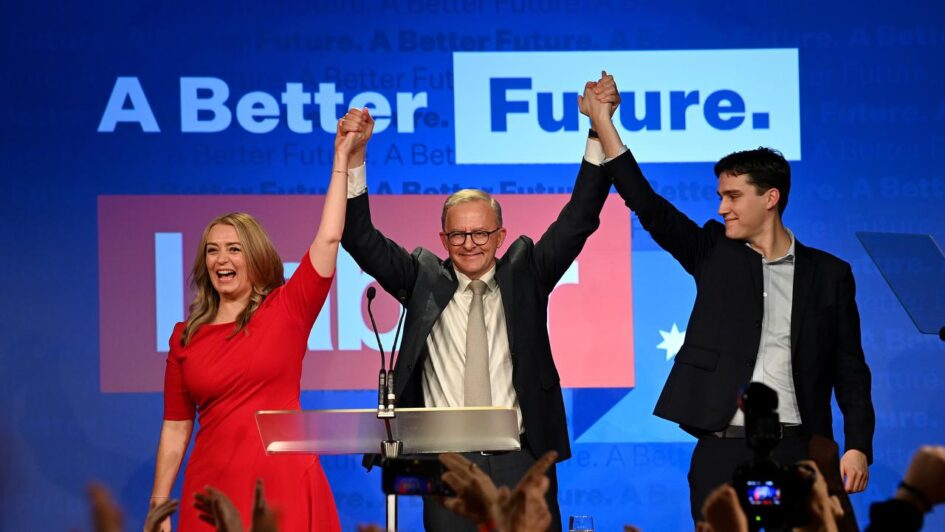 This is a great result. The tired and corrupt Coalition government has been turfed out despite the billions in public money wasted in bribing Australians for their votes, despite the relentless propaganda of the government’s corporate media cronies. Michael West reports on the new era.

The mood was surely sullen on the mainstream TV networks last night as a nation’s pundits grappled with the collapse of the Coalition government after ten years in office.

They, like the government, have failed the people. Yet the people have seen through it all, the propaganda, the corruption, the crony capitalism, the incompetence, the thick veneer of constant lies and spin.

This is no thumping endorsement of Labor though, At just 32%, its primary vote is even lower than it was when they lost to Scott Morrison in 2019. It is a rejection of the small target strategy. The rise of the independents, of the third force in Australian politics, the Teals and the Greens, does complicate Labor’s mandate to rule.

But it also delivers enormous opportunity for change.

It won’t be so sleazy under Albanese

The good thing is that Anthony Albanese is a decent human being, somebody who can be trusted over the riff-raff which have governed us for the past decade. This alone, the greater personal and political integrity of the Labor leadership, will help to restore some confidence in government.

But it will not be enough. Albo will have to govern by consensus. And he would do well to begin by shedding Labor’s suite of “Liberal Lite” policies. The ludicrous $200bn in Stage 3 tax cuts for high income earners – yes all those big media pundits who have been barracking so fervently for the Coalition are on that gravy train – ought to be scotched immediately.

With the billions in weekly interest payments on the nation’s soaring debt, if there is any money to be given out it should go to those who need it, and will spend it. Poverty and the housing crisis need to be addressed urgently, not with the lame existing Labor proposals for reform but with decisive policies which make social and economic sense.

Australians have spoken. They want action on climate change and integrity in government. The 114 new fossil fuel projects now on the boil need to be dumped in favour of a substantial, rational program for energy transition.

Don’t believe the siren cries of the corporate media who claim we need more coal and gas. What we need, and what will deliver long term growth, is a switch to cheap renewable energy.

Millions of Australians are demanding an inquiry into Rupert Murdoch’s News Corporation and Albo now has a mandate to tackle this, the dire state of this country’s media concentration, the thing which got us into this mess.

There will be much wailing and gnashing of teeth by Murdoch’s lackeys and others about a hung parliament, and we are yet to see how the numbers play out, but a hung parliament is not a bad thing. Julia Gillard managed to push through reams of legislation in her years.

It will just mean the new parliament will need to be debate legislation on rational grounds rather than rely on deals struck between the two major fossil-fuel-funded political parties. The newcomers have not been bought off by corporate money like the majors. That is a good thing for sensible legislation.

A broader mandate by ordinary Australians, by communities, less corporate money in politics; these are good things.

So it is that now is the time for repair. The task is immense.

There were two sets of economic data out this week, one pored over by corporate media, the other largely ignored. The second was unemployment on Thursday. A solid set of numbers showed the jobless rate fall to record lows thanks to a rebound from Covid but also thanks to the two-year freeze on immigration.

The first was wage growth though on Wednesday, or rather the opposite, that is falling real wages for millions of Australian workers. This was largely ignored or glossed over by the media but given the sharp rise in the cost of living, it is of greater import for many Australians.

When you look at the figures by various governments, they show a clear picture of Liberal poor performance: a clear collapse in fact from Sept 2013 (Abbott/Hockey/Cormann).

The real figures (after CPI) are the real game – but ABS will only give WPI – so we have to add CPI. Using the “trimmed mean”, which takes out the froth, and which the RBA also uses.

Under PMs Abbott, Turnbull and Morrison, real wage growth decreased from +0.3% to -1.1%. Albanese has pledged to address the crisis in stagnant wages. But the problems with the economy, after a decade of Coalition rule, are serious.

Even before the Pandemic, the Coalition had racked up more debt than every Australian government since Federation, combined. Thanks to reckless pandemic spending, such as the $40bn in waste from JobKeeper, we are headed towards a trillion dollars in debt, on every measure by far and away the highest indebtedness of the last 100 years.

What growth the government has delivered then has been at a high cost. It should be noted that all governments took a pandemic hit around the world. But to those – increasing ranks of MMT adherents – who would claim debt does not matter, it does matter because there has been a redistribution of wealth to the upper echelons of society at the expense of other Australians.

Furthermore, the billions of dollars in interest on the half a trillion or so in bonds which we are now paying are real.

On a range of other economic metrics, this government has failed. While wages have stagnated, the cost of living has gone through the roof. To be fair, inflation is largely beyond the control of the government. It is largely driven by global factors. Nonetheless, Australia has slipped down the ranks of economic performance vis-a-vis its peers, and quite dramatically.

Perhaps ominously this week, the markets sold off 5 quite steeply. This will affect public confidence in that it hits superannuation. Given global factors it is no stretch to say that Labor may have inherited a poisoned chalice, given both inflation and stagnating growth overseas.

The Coalition has made an enemy of our largest trading partner China. Entire industries have been compromised, for instance the wine export market to China has entirely collapsed. Yet, despite all the harrumphing about the military threat from the Chinese we have sold them (long term leases) the ports of Darwin and Newcastle as well as a slew of other assets.

Capping off its massive fail on national security, the neglect of our Pacific sphere of influence has seen China to befriend the Solomon Islands and we are soon likely to have a Chinese naval base in the Pacific. Labor has inherited a far less secure country and will need to address the huge challenges arising from Coalition failures on foreign affairs.

There is a housing crisis. Government has failed to address the root causes of affordability.

Negative gearing has seen investors prosper at the expense of younger Australians. A home is now out of reach for many.

Policy measures such as changes to CGT, the failure to implement promised money-laundering laws (which has meant black money from China surged into Australia) and self-managed superannuants competing against first home buyers, have all made residential property less affordable and locked millions of Australians out of the market.

“It’s not a race,” said the PM Scott Morrison. He later conceded, only recently, that it was a race. Dithering on vaccines put Australia at the tail end of global vaccination rates. As did the failure to strike an early deal with Pfizer despite the pharma company approaching health minister Greg Hunt early on.

The gross failure of the government to get vaccines, RAT tests and a surge workforce into the aged care sector earlier this year resulted in the deaths of many elderly Australians. Labor needs to implement the recommendations of the Royal Commission, not ignore them like the las government.

On a range of human rights metrics, Australia is worse off. It has slipped on press freedom. There has been a failure nationally to reform archaic defamation laws. The persecution of whistleblowers continues such as Julian Assange and David McBride, while Bernard Collaery is in court this month, in a secret trial.

Labor needs to rethink the persecution of whistleblowers. Australians must not be prosecuted for doing the right thing.

Australia, after ten years of Coalition government, is derided internationally as a laggard on climate action. Subsidies for fossil fuel corporations stands at a record $12bn. Despite international calls for no new fossil fuel projects there are presently 114 new projects afoot. Entire new provinces such as Beetaloo Basin in the NT are being opened up for gas development.

Unfortunately when it comes to gas fracking, Labor is in hoc to the gas industry. Australians need to bring pressure to bear on the Albanese government on fossil fuels.

Meanwhile, the gas lobby has gained control of Australia’s carbon emissions scheme, exploiting it to protract fossil fuel projects and game public subsidies. This is an urgent issue for reform.

The Morrison government would quietly applaud its performance in media as its control and influence over major media companies has tightened over the past decade. They changed the laws in 2015 so Nine Entertainment could take over Fairfax.

The sector therefore consolidated and the subsequent Digital Media Bargaining Code, while doing nothing to address the threat of surveillance capitalism by the digital giants such as Google and Facebook, rewarded media allies such as News Corp, Nine Entertainment and Seven Network via straight transfers of cash.

In economic terms, the Coalition has propped up inefficient old media organisations to the detriment of new media and innovative start-ups. Worse, as evinced by the wave of disaffection over social media regarding mainstream media bias towards the Coalition, the effect on politics and reform has been detrimental to Australia’s democracy.

Labor now has a mandate for reform.

Exit of automakers which had begun under Labor was complete. There are no longer any Australian car makers. Broadly, Australia remains a “farm and a quarry”, effectively spurning value added industries in favour of selling raw materials via multinational companies.

Labor ought to begin an inquiry into manufacturing, how to value add in iron ore, in agriculture too.

Inequality is higher than ever. Homelessness is rife. There is no sound plan for housing. Jobless benefits remain flat.

Thanks to the $36bn in superannuation tax breaks, wealthy Australians have become wealthier. Super has become a giant tax shelter whose wealth can now be passed on to the next generation of Australians, further entrenching wealth inequality.

The Coalition has been the highest spending and highest taxing government in history. Its gutting of the bureaucracy has only succeeded in driving up the cost of government. Consultants such as the Big 4 have thrived at the expense of public servants.

Labor can easily address this by axing the consultancy gravy train. A Federal ICAC too should now be in the wings. Corruption needs to be addressed, as does the horror which is defence spending.

The $5.5bn waste on subs, the abortive F-35 Strike Fighter program. The billions in defence waste needs to be addressed.

Private school funding is up at the expense of public school funding. The tertiary sector has been gutted. These also need to be addressed urgently.