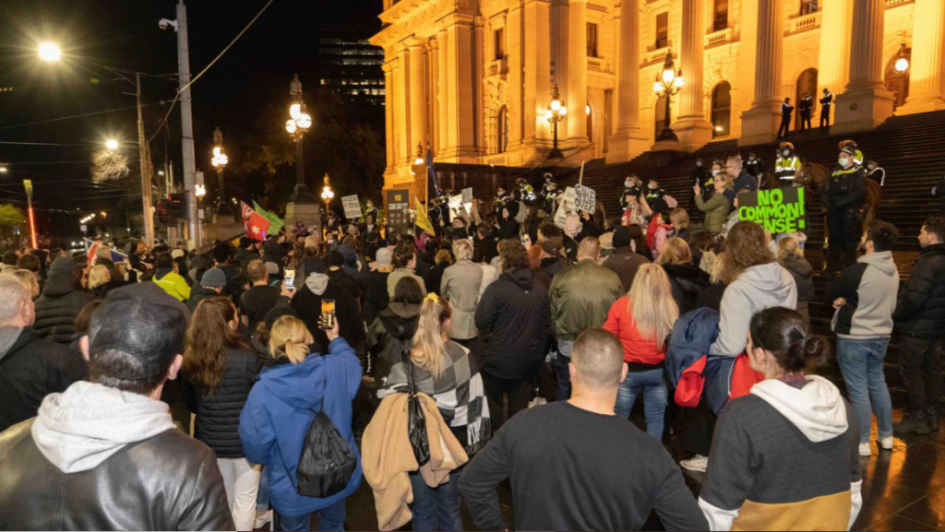 Powerful scenes were witnessed on the streets of Melbourne overnight, just hours before the city entered its fifth lockdown, as angry protesters marched through the CBD.

Concerned citizens filled Melbourne’s CBD from around 7pm to oppose the new snap lockdown, in a city that has already seen too many restrictions.

Powerful scenes were witnessed on the streets of Melbourne overnight, just hours before the city entered its fifth lockdown, as angry protesters marched through the CBD.

Concerned citizens filled Melbourne’s CBD from around 7pm to oppose the new snap lockdown, in a city that has already seen too many restrictions.

On the streets of Melbourne overnight, just hours before the city entered its fifth lockdown, protesters marched through the CBD to oppose new restrictions in the state.

Demonstrators called for an end to draconian measures, just hours after Victorian Premier Daniel Andrews announced the state would enter a five-day snap lockdown from midnight.

Protesters chanted “Sack Dan Andrews” on the steps of Flinders Street Station, and then marched from the station to Parliament House, chanting “freedom” and accompanied by a police presence.

Signs read, “I have a choice” and “lockdown kills”, with many demonstrators not wearing face masks.

One speaker was heard yelling: “Here we go again. Once again, Daniel Andrews has jumped at his own shadow and thrown millions of people’s lives into chaos.”

Protesters on social media described lockdowns as “human rights abuses”, with many claiming they were just regular everyday people who have had enough.

Really great scenes to see, and a great video package.

The frustration is understandable. So many people have lost their businesses, their homes and have had their families ripped apart. Many more are in a really bad way.

How many more waves can be survived of this perpetual operation?

Lockdown 5.0 for Melbourne. 16 months into this pandemic saga. What an absolute farce.

According to the latest lockdown announcement, Victorians will only be allowed to leave home for a few reasons, with Andrews defending his decision to place the state on house arrest again.

He says they must “go hard” in order to contain the ‘highly infectious Delta variant’.

“We want to deal with this with a short, sharp, lockdown, decisive action, not waiting, not dawdling, now is our time. You only get one chance to go hard and go fast. If you wait, if you hesitate, if you doubt, then you will always be looking back wishing you had done more earlier.”

“I am not prepared to avoid a five-day lockdown now only to find ourselves in a five-week or a five-month lockdown. That is why we are making this very difficult decision and why I know Victorians will, despite the pain and difficulty of this, know and understand there is no option.

Only one chance? No other option?

This is the exact same Orwellian rhetoric that has been used since the beginning of this saga.

The lockdowns won’t end with the ‘containment of a deadly virus’.https://tottnews.com/2021/06/13/the-war-is-not-meant-to-be-won/embed/#?secret=npXszq610f

It is all by design, and only will change when people say enough is enough.

Free thinking citizens must continue to use the facts to dismantle this Huxlian framework.

It’s good to see many people fighting back.

We will continue to highlight these individuals and their efforts, unlike the mainstream media.

‘Wake Up, Australia!’: Thousands march through the streets of Brisbane

The data is in — stop the panic and end the isolation