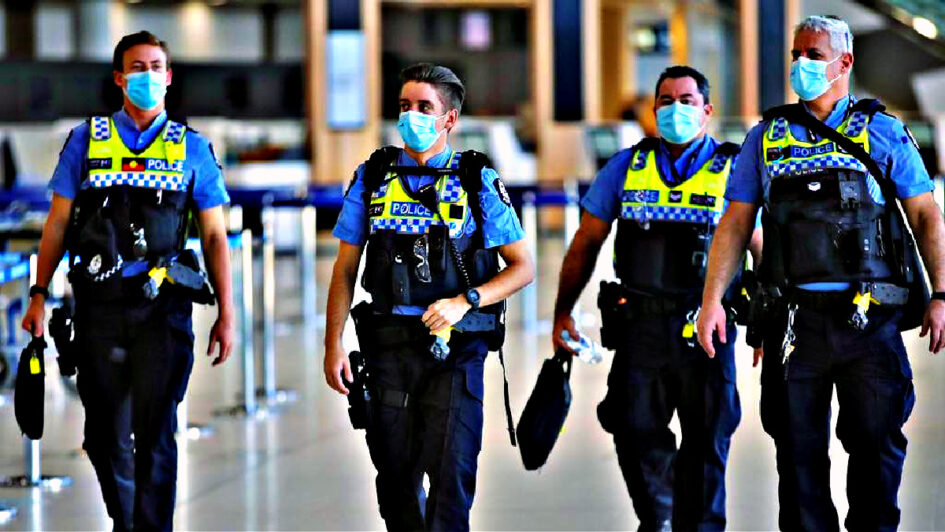 Police officers at Perth airport checked some passengers tickets as they arrived at T1 to ensure they were not travelling elsewhere in the State for tourism purposes (beyond the area subject to the Peel and Perth three-day lockdown). 26 APRIL 2021 Picture: Danella Bevis The West Australian

NSW Police have come under criticism for launching a ‘high-visibility operation’ across Sydney’s south-west to ensure public compliance with state health orders.

A viral video has revealed a snippet of Sydney’s lockdown nightmare, with dozens of police cars seen parked on a single street during the crackdown.

The NSW Government has continued to come under fire after announcing an extended police operation for Western Sydney, following the state’s latest ‘outbreak’.

Over 100 police, including several mounted units, have recently been deployed in the city’s southwest, after concerns locals were flouting lockdown restrictions:

Premier Gladys Berejiklian had warned of consequences for the Fairfield, Canterbury-Bankstown and Liverpool local government areas, if case numbers continued to grow due to ‘disobedience’.

These local government areas account for 110 suburbs, and is home to more than 820,000 residents — representing a 519 square kilometre swathe of the city.

Still think this is about a ‘virus’, ladies and gentlemen? What kind of justified response is this?

In the video above, 21 police vehicles can be seen in just one minute, which was viewed over 120,000 times in under 24 hours and subsequently attracted hundreds of comments.

This crackdown is known as a “high visibility compliance operation” in the three LGAs, which included the NSW Police dog unit, highway patrol and helicopter support.

‘You must comply, citizen!’

Berejiklian attributed a spike in cases to ‘non-compliance’ in the community and illegal household interactions, giving you an even greater picture of the authoritarianism Sydney is facing.

The decision to bring in additional law enforcement attracted immediate criticism from community figures, claiming the increased police presence was a double standard.

Commenters have been heavily critical of the increased police presence in the region.

Fairfield Mayor Frank Carbone was particularly outspoken against the order, accusing the state government of turning the latest coronavirus outbreak into a game of politics.

Mr Carbone said the recent outbreak was “not a Western Sydney problem”, blaming several failures in the hotel quarantine system on the recent spike.

“I‘m not going to cop this,” Carbone told reporters.

The outspoken mayor called on the Federal Government to provide financial assistance to those immediately affected by the new laws forcing people out of work.

“This is a terrible turn of events. Over-policing multicultural communities is a recipe for disaster,” she said. “The mounted police were never called into Avalon or Westfield Bondi.”

Lakemba MP Jihad Dib was also critical of the NSW Government crackdown, claiming the move to up police presence in Western Sydney was not helpful and called on authorities to focus on communication not fines.

“While it’s important to have compliance … what we need to do is make sure we don’t create it in a way that instils panic or fear.

If this is about putting a whole heap of police there because we don’t trust the community, then I worry about that.”

Ms Berejiklian has since defended her comments directed at the recent cases coming from Fairfield, Canterbury-Bankstown and Liverpool, insisting she did not mean to cause offence or added stress in the developing crisis, but it was a ‘necessary’ thing that needed to be done.

The heavy-handed tactics of police officers show that the techno-fascist nature of this pandemic is not solely subject to Victoria Police, which routinely acted like thugs over last 12 months.

New South Wales Police, now instructed to roam the streets during Sydney’s heaviest lockdown since the national shutdown in 2020, is showing they can also hang on this level.

It’s all about mass compliance to the birthing Brave New World Order system, and is not exclusive to singular states like Victoria. The beast has infected most of the country.

We have said this from the very beginning of this pandemic saga: