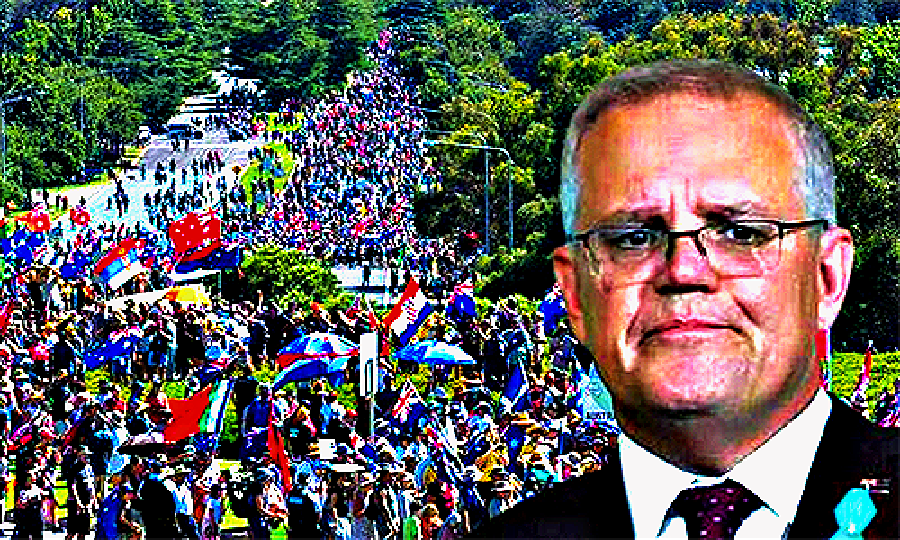 His latest, Convoy to Canberra, focuses on the extraordinary popular uprising in February 2022 in which possibly half a million disgruntled protesters from all across this wide brown land descended upon the capital city to vent over COVID mandates.

In particular, over vaccine mandates. For a week or so, Canberra’s population doubled. You might say that, for the first and perhaps only time in its history, Canberra was at least half full of normal people.

In time, their works will become indispensable chronicles of a time without compare, a time when the world lost its sense of reality and perspective and its moral compass.

Convoy is an up-close, on-the-ground account of what might well be the biggest, the most counter-cultural and the most extraordinary public protest in Australia’s history.

Not least extraordinary because it was all but totally ignored by the political class.

This was to be expected, because in the era of ideology, top-down politics and narrative-shaping, the people massed in Canberra did not suit the prevailing storyline.

They were, and are, inconvenient outsiders. And we know what becomes of outsiders in the age of enlightenment.

They are ignored, silenced or ridiculed. Cancelled. Yes, we have new media (like Tott News, the Cauldron Pool and Rebel media), independent “citizen-journalists”, bloggers and freedom Parties.

But the danger is that COVID dissidents will become a ghetto, an echo chamber, without channels to mainstream voices to whom the great, tuned-out masses of the COVID-duped might listen.

Hence the critical importance of books like this by experienced, credible journalists with links to normie-world.

Australia now has its own Canadian truckers’ movement, its own Dutch farmers’ protest (perhaps not quite January 6, though), that demonstrates to a world that had perhaps concluded otherwise, that we were up for showing resistance to tyranny.

In the spirit of the protest movement, itself a flowering of the democratic spirit, in Convoy the author hands over much of the writing to the protesters themselves.

It draws heavily upon the motivations and stories of participants, interspersed with some heartfelt and searing commentary on the policy madness of the day.

There are some memorable lines and vignettes that go well with the many photographs in the book.

Quite a diverse crowd, then. The book is an immersive experience, with participants happily named despite the risks of this in Australia’s emerging surveillance State.

Several character traits emerge in relation to the protesters. No, Canberrans, they are not bogans. They are from all backgrounds.

There are poets, fire fighters, police, doctors, a pilot. They love their flag. Patriots, then. And their music.

Woodstock without the drugs or the mud, as Stapleton observed. “This is Australia” was a recurring anthem. These days, there are two Australias, though. And that is the point.

They have a visible Indigenous presence. They are peaceful and friendly, but angry.  hey loathe politicians. They are outsiders. They are principled. Neither Left nor Right in the tunnel-visioned, yesterday-thinking sense that corporate journalists would attempt to define this.

They are activists now, but mostly weren’t always so. They are hurt and aggrieved. They have been materially damaged by the COVID State, and many have lost much.

They have a sense of pride in an Australia that they now find difficult to locate. And, above all else, they are mostly in it for their children and grandchildren, for whom they genuinely hold fears for the future.

And why wouldn’t they be fearful?

There are continuing mandates here and overseas, despite some mealy-mouthed policy backdowns over some of the more reprehensible policies – in an election year, it must be said.

But there are tell-tale signs of political support for other authoritarian measures.

There has been no admission of any wrong being done in dealing with COVID, at least some of the emergency powers are still firmly in place, and at least some of the worst political offenders in Australia might feel emboldened to re-enact their fascism in future as a result of electoral rewards for their dark deeds.

The cageyness of the political class over COVID – never explain, never apologise, never admit mistakes – should itself give rise to ears for the future, despite the recent loosening of the reins.

And there are still all of those third parties out there enforcing ongoing aspects of the COVID regime.

A short time back, around a fifth of private sector employers were said to be insisting on vaccination as a condition of employment. This is sinister, and largely hidden.

And at least some of the institutions that are inviting back the unvaccinated they previously had shafted are (blatantly) only doing so to relieve their 2022 staff shortages. Not from guilt or principles like justice. What would stop them doing it all again?

Apart from the sheer bravery and commitment of the convoy participants, it is their fear for the future and their suspicion that if they didn’t act, no one else would, that should engage readers the most.

If they hadn’t taken the already impressive and mounting protests in the State capitals to a whole new level, emboldened, fascist-leaning leaders might well have simply assumed that most Australians, as per the polls and the elections, did really accept, even admire, their brutality.

The masses out in force on the streets in Canberra reminded them, and us, that there is an opposition Party out there. For this reason alone, we owe them and their very able chronicler, John Stapleton, a mighty debt.

Convoy affirms a still rampant Aussie spirit which many of us might have assumed had completely ebbed away in a period of blind acceptance of policy barbarism with facile and limp-wristed excuses such as “roll up your sleeves for Australia” and “we are all in this together”.

The book confirms that the COVID dissidents among us are not a tiny minority, despite the propaganda and lies of the legacy media.

It wasn’t just the half million who went to Canberra. There were tens of thousands more who cheered them on, on the highways and byways, and yet more who supplied them with food and other provisions.

And the laptop warriors who reported their deeds on new media and social platforms. It didn’t much matter that the bought-up old media didn’t show up.

Nor, of course, did the shameful Lib-Lab duopoly politicians. Better to seem not to have noticed that their own town had doubled in size.

The ignoring of the convoy by our political betters is yet more evidence of one of the key strategies deployed by the COVID State. Ignore. Silence. Demonise. Ridicule. Propagandise.

After all, it worked brilliantly for two years. Why not keep it going? The other media strategy was in play as well with the convoy. Play the crowd numbers game and minimise the damage by going low.

Other COVID State strategies were in play, with scenes reminiscent of Hong Kong and of Tiananmen Square.

Let them have their fun for a short time, then brutalise them with police savagery. The book has some horrific tales of Daniel Andrews-style community policing, including the possible use of the very latest in crowd-control techno-devices of dubious morality.

So, after days of peaceful protest, and no doubt given their politicised orders by the ACT government, the police moved the protesters off the parliamentary triangle to the outskirts of town, then out of the ACT itself.

The author takes heavy aim at Scott Morrison – known fondly to at least some readers here as “Scotty from Astra Zeneca” – and attributes much of the blame for Australia’s COVID hysteria and nightmarish outcomes to the now departed and largely unlamented ScoMo.

There is no objection from me on this score. But Morrison wasn’t alone, and wasn’t the worst of our leaders to have driven stakes into the hearts of their voters.

It was a Lib-Lab job that was done on us, and the Nuremberg Two sentencing that we might fantasise over in our minds covers the broad range of political actors (and others).

Many of ScoMo’s COVID abuses were crimes of omission and cowardice, while others were off the page with malice and hatred of the outsider class.

There has not been a single apology from anyone in office over COVID, as the author notes. Not one.

Not from our new Prime Minister, who was there the whole time and who, like most Leftist opposition leaders globally, simply whimpered that not enough butchery was visited upon the citizenry, and not soon enough.

Hardly an indicator of a more reasonable and respectful treatment of the citizens of Australia if/when a similar situation arises.

This piece was originally published in the Australian political journal Politicom and is republished here with the kind permission of the author.