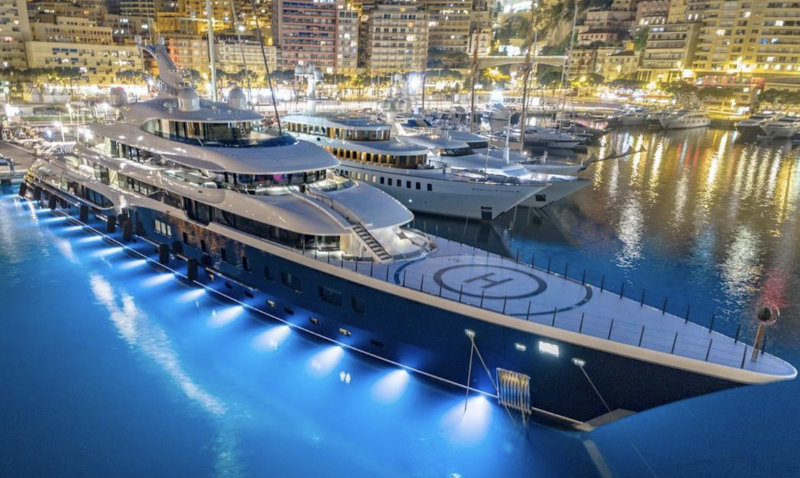 Big business doesn’t vote, small business does. That’s the dilemma for Scott Morrison and Josh Frydenberg as they try to keep JobKeeper secret heading into the election. Michael West reports.

There is rising discontent in the Liberal Party’s small business base about the billions splashed on JobKeeper subsidies to large, profitable corporations.

No wonder. It is hardly comforting to know that the world’s richest man, French fashion magnate Bernard Arnault, is a beneficiary of Josh Frydenberg’s largesse. Perhaps Australian taxpayers may be afforded the privilege of adding to Bernard’s collection of Picassos or footing the fuel bill for his newest super-yacht (pictured in Monaco above) Symphony.

The symphony of revelations that large profitable companies, elite schools, posh clubs, and even foreign multinationals such as Bernard’s LVMH group which owns Louis Vuitton, Christian Dior and Moët & Chandon have been gorging on JobKeeper, have just tossed an ugly big spanner in the works for the Coalition election campaign.

The debacle over the vaccine roll-out has rendered an early federal election unlikely. Amid exploding Covid infections in NSW, Morrison’s campaign team is now desperately pushing the narrative “end lockdowns, live with Covid” while demonising Labor state premiers for closed borders but, with every death, time is running out for an early election. Besides, what premier in their right mind would open their borders to NSW right now?

Then there is the economy. It all intersects, tactically. The snapback from recession may soon be crushed by the likelihood that Australia will lapse back into recession in the September quarter. The June quarter figures which emerged last week were buoyant, yet they only included a few days of Sydney lockdown at the end of June.

Meanwhile, even the Liberal-biased media is beginning to fracture, such is the rising furore over JobKeeper. Assuming Scott Morrison has up until May next year to go to the polls, it leaves him a small window to drag the economy out of the doldrums following the December quarter figures which emerge in March next year.

Assuming a best case scenario, that asset prices don’t pop and the economy recovers, the JobKeeper conundrum may be the key to the Coalition’s electoral fortunes. If they keep the register a secret, eschewing proper disclosure practices in the US, Europe, New Zealand and elsewhere, the revelations of corporate welfare will continue to eke out; resonating unfairness, profligacy, incompetence on a grand scale.

Here’s one for today. Highly profitable pokies den DOOLEYS Lidcombe Catholic Club in Western Sydney, whose Patron is Archbishop Anthony Fisher, banked $3.15m in JobKeeper subsidies despite shedding 11% of its staff in the 2020 financial year.

An investigation by Michael West Media into DOOLEYS’ financial statements showed losses per member from poker machines over a nine-year period were 38 times higher than the amount spent per member on “community services”.

The pokies den averaged more than $50m a year over ten years in clear profits from their pokies players, alone, before grog and food.

They will keep coming. There was media magnate Lachlan Murdoch’s radio company Nova Entertainment which nabbed a $10m handout then recorded a 29% surge in profit.

The Kings School, with its crest Fortiter et Fidelitur, bravely and faithfully grabbed its share. Brisbane Grammar whose motto nil sine labore picked up its free money with nil labore at all. Melbourne’s Wesley College, with its motto sapere aude, dared to bludge on the public with all the sapience it could muster. All already enjoy enormous public subsidies. None of them needed the money in the least.

Should St Josephs at leafy Hunters Hill change its school motto from in meliora contende (let us strive for better things) to Let Us Strive for More Money from the Peasants?

Doctors too are appalled at the gaming of the system. One contact telling us his Australian New Zealand College of Anaesthetists (ANZCA) was grilled at the annual meeting about helping itself to $3.5m, only to respond that it was okay because everybody was doing it.

“It is small beer, but as far as I can see the specialist medical colleges all did nicely out of Jobkeeper. My college, ANZCA, $3.5M. I checked the annual financial reports of the physicians and surgeons: a little more. I asked a question at ANZCA’s AGM re whether now that the dust has settled we would pay the money back. The response was that we are doing what other similar organisations are doing.

“I see that the wealthiest schools got as much as $20m, so the medical colleges are certainly able to say “well, we really didn’t get much”. But if everything was on the public record, and momentum grew for those who didn’t need it to pay their money back, I think a lot of these smaller players would buckle in order to avoid public opprobrium.”

The Big Four consultancy and audit firms have told us they didn’t get it. Surely though, they were the enablers, the first phone call which every large corporation made. Can we get this?

Nine’s 60 Minutes continued the rot for the Government last night, running a good investigation into the “biggest cash grab in history”. The significance of this was that Nine is Liberal aligned. It got JobKeeper itself, and its major advertisers such as Qantas and Gerry Harvey also supped high on the public teat.

Despite all that it had a crack. The most delicious bit was Liam Bartlett the reporter pushing Simon Birmingham on the matter, saying the architect of the scheme, Treasurer Josh Frydenberg, by hiding from the 60 Minutes cameras, had pushed him under a bus.

Indeed, “Birmo” was not even Finance Minister then, he was Minister for Education. Even Murdoch’s Herald Sun, albeit buried in the back of the newspaper, ran a story about Bernard Arnault and his Louis Vuitton getting its $6m. JobKeeper rorting is irresistible, political dynamite.

And it will not go away, which presents an agonising dilemma for the Coalition and its big donors and corporate patrons. Where is the business lobby, where is the Business Council of Australia on this disgrace? Invisible. Carping on about border closures and “what business needs”.

The government managed to put off the inevitable, buy some time last week, when it put Pauline Hanson up with a bogus transparency amendment, literally to disclose all the ASX companies which received it, literally all the companies which had already disclosed they had received it. The demands for disclosure, despite the duping of One Nation will not dissipate. The passage of legislation will depend on it. As key cross-bench senator Rex Patrick tweeted after the debacle:

“I’m done with ‘em. Scott Morrison gifting hard earned taxpayer money to his business mates & donors makes him the most shameless & unethical PM ever. And Josh Frydenberg’s JK prudential failure makes him the most incompetent treasurer ever. EPBC discussions over Susan Ley!”

In the end, the outcome on disclosure and therefore billions in grifted public money returned, will come down to the realisation that this, as Shadow Finance spokesman Andrew Leigh puts it, not Liberal Party money, it is taxpayers’ money. It will come down to the generation realisation that, yes while JobKeeper did keep a lot of worthy businesses alive during the pandemic, it was also rorted from pillar to post and those who now have the money of ordinary Australians need to disclose.

It will come down also, more fundamentally, to the plunging standards of political and business leadership in this country and real leaders will have to stand up and do what is right or be condemned by future generations, or worse drag future generations into the mires of an ethical wilderness where “they got it too” is the only standard which counts.