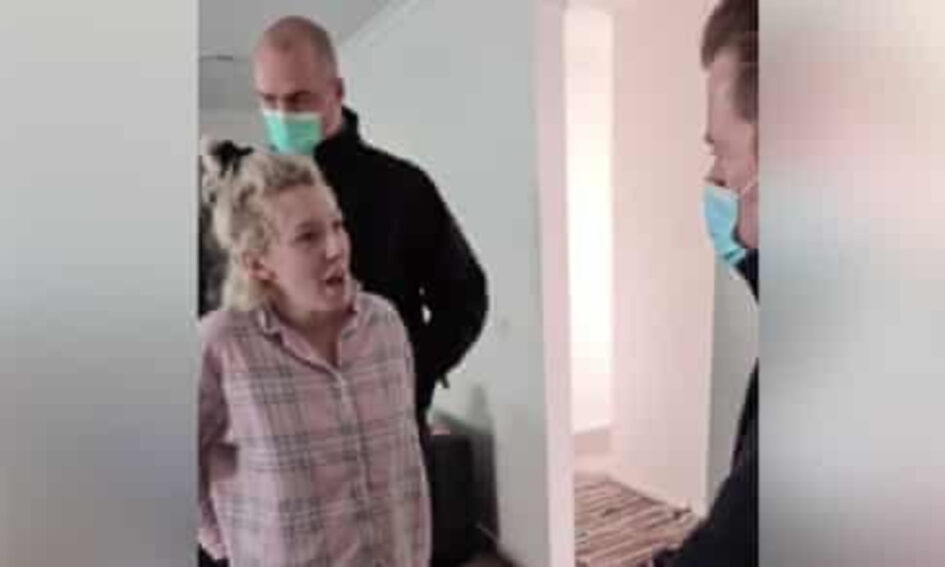 Every lie has a trigger point when it unravels. In Australia, it is the arrest of a pregnant woman in front of her two children because she had dared to put up a Facebook post in support of lockdown protests.

The footage has now been viewed more than seven million times around the world and featured in numerous international bulletins.

Ballarat resident Zoe Buhler was arrested and charged under Section 321G of the state’s Crimes Act 1958 which makes it an offence for a person to “pursue a course of conduct which will involve the commission of an offence”.

And the only reason any of us know about it is because the event was live streamed. Police attempted to confiscate all electronic devices in the house but the woman’s husband refused to hand his device over.

Leading experts in Australia and around the world are condemning the naked grab for power by governments under the cover of Covid-19 and arguing that lockdowns do far more harm than good.

President of the Victorian Bar, Wendy Harris QC, said: “In the case of Ms Buhler, who was arrested and handcuffed in her home in front of her partner and children, the Bar is concerned that the enforcement action of the police … appeared disproportionate to the threat she presented.”

Buhler told reporters said she did not realise she was doing anything wrong, and the police could have given a phone call rather than arresting her.

“I didn’t realise that I wasn’t allowed to,” she said. “The police could have given me a phone call and say, look, you need to take down your event or you could be charged with a crime and I would have done that. It could have been as simple as that.”

The offending post reads in part, ‘PEACEFUL PROTEST! All social distancing measures are to be followed so we don’t get arrested please. Please wear a mask unless you have a medical reason not to. September 5th is FREEDOM DAY! As some of you may have seen the government has gone to extreme measures to prevent the Melbourne protest. Here in Ballarat we can be a voice for those in stage 4 lockdowns. We can be seen and heard and hopefully make a difference! END LOCKDOWNS. STAND UP FOR HUMAN RIGHTS. WE LIVE IN A FREE COUNTRY’.

Assistant Commissioner for the Victorian Police Luke Cornelius admitted that the optics of arresting a pregnant woman were terrible, but defended the conduct of his officers and expressed no regret over the operation.

He told reporters that police had visited more than 80 people and warned them that if they attended or organised protests, they would be arrested. Three additional people had been arrested and charged with incitement for planning an anti-lockdown protest at the Shrine of Remembrance in Melbourne.

Despite a direct request for a response, the Prime Minister Scott Morrison has refused to comment. If you do not condemn, you condone.

Powerfully aligned with the conservative elements of the Liberal Party, and desperate to see the end of Scott Morrison’s woeful reign as Prime Minister, the response of Sky News to the unparalleled losses of personal liberty in Australia under Covid has become increasingly incensed with each passing day.

“The only person guilty of incitement is the Premier of Victoria,” Jones said.

“This woman is a victim of the inexcusable and unlimited powers given to the Victorian police. The verbal and intimidatory behaviour towards a pregnant mother is a form of violence the like of which no Australian will tolerate. “Go Daniel Andrews, and go tonight. Before more damage is done.”

Sky News host Rowan Dean described the event as a National Day of Shame and said Victoria stood condemned in the eyes of the world. “Scott Morrison, enough is enough… Stand up and say we are not going to have pregnant women arrested in their own homes for posting online a legitimate political point of view.

Distinguished academic Professor Ramesh Thakur said we were seeing martial law masquerading as medical law: “RIP the Australia I admired, migrated to and thought I knew”.

And just in case you still don’t think Covid is being pushed to extend the power of the state and make billionaires even richer, here are your chances of dying from the most hyped disease in history: