Noam Chomsky on the Plight of Assange: “The Complicity of Many Governments” 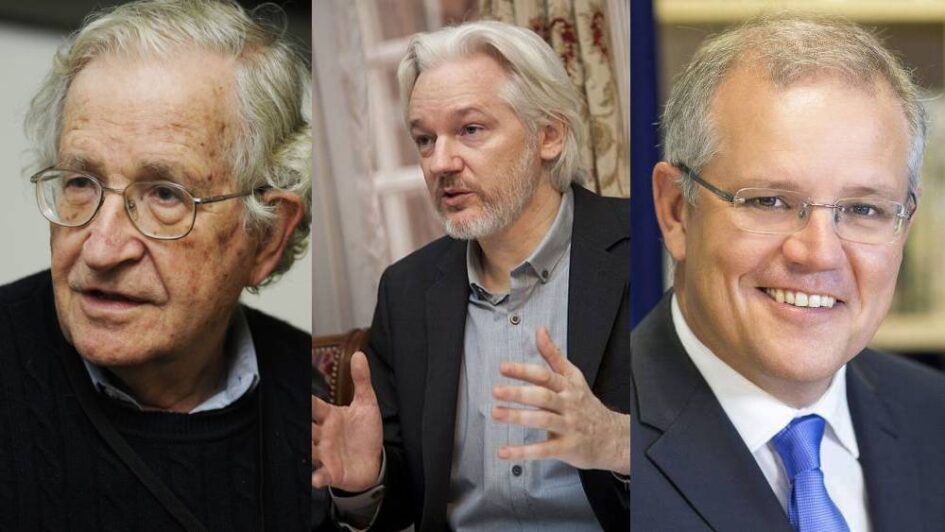 The Best of 2020. By Paul Gregoire: Sydney Criminal Lawyers Blog.

British Judge Vanessa Baraitser is currently deliberating on whether Australian journalist Julian Assange should be extradited to the United States, as he’s currently being remanded in her country on American espionage charges.

The extradition proceedings came to a close on 1 October. Baraitser told the court that she would be handing down her decision on the matter at 10 am on 4 January next year: notably, after the US presidential election.

If extradited, the WikiLeaks founder will face seventeen espionage charges and one count of computer misuse.

Carrying a joint maximum sentence of 175 years, the charges relate to publishing secret military documents: many of which exposed US war crimes in Afghanistan and Iraq.

There is much about Assange’s case that undermines the rule of law: from the US claim of extraterritoriality to attempting to extradite on political grounds. While his treatment at London’s high security Belmarsh Prison amounts to prolonged solitary confinement, which is basically torture.

Yet, despite all this happening to an Australian citizen, there’s hardly a peep coming from Canberra.

The overreach of Empire

“The brutal persecution of Julian Assange is an international scandal, with the complicity of many governments,” said MIT Professor Noam Chomsky, in response to a question put to him about the Australian government’s lack of action on the plight of Assange.

“Assange’s crime is to have performed the work of a serious journalist: to provide the public with critical information that the US government does not want them to have,” the renowned political dissident told Sydney Criminal Lawyers.

Most of the charges laid against Assange are contained in the Espionage Act and relate to conspiring, obtaining and disclosing defence information. But, as Chomsky points out, closer to the truth is that Julian is being hung out to dry for publishing secret documents Chelsea Manning forwarded to him.

Perhaps the most extraordinary aspect to the entire fiasco is that the US government reached across international borders to arrest and remand a foreign citizen under its domestic laws for alleged crimes that Assange is said to have committed on the soil of other nations.

But it doesn’t stop there. Assange has now been remanded in London for over 12 months, pending a decision on extradition under a UK-US treaty that specifically rules out being able to extradite an individual if the offences they’ve been charged with are political in nature.

And, of course, it doesn’t get more political than espionage.

Washed his hands and sealed his fate

After Ecuador revoked Assange’s political asylum in April 2019, it invited UK authorities in to arrest him at its London embassy, where he’d spent the last seven years. And the South American nation just happened to evict him only weeks after it had obtained a $10 billion loan from the IMF and the World Bank.

Straight after Assange’s 11 April arrest, Australian prime minister Scott Morrison appeared on the ABC to stress that the WikiLeaks publisher would receive “the same support that any other Australian would in these circumstances”, but nothing special.

And as the rising tide of anomalies around the Townsville-born Australian citizen’s case has only grown higher, Morrison has stayed silent on the matter.

But despite the PM’s assurances that Assange would receive “the same support” as other Australians this just isn’t the case, as one only has to look at the way the Australian government has stepped in to assist other journalists who have fallen short of the law in less friendly jurisdictions.

Following the 2013 gaoling of Australian journalist Peter Greste in Egypt, then foreign minister Julie Bishop worked behind the scenes to ensure his release, while in 2018, foreign minister Payne pulled out the stops to see journalist James Ricketson released from prison in Cambodia.

However, these days, Payne is shrugging off the assertions made by Nils Melzer around Assange’s case being a politically motivated show trial involving denial of justice and abusive prison conditions, because the UN special rapporteur on torture hasn’t been in contact with her department directly.

And it can also be assumed that another reason the Australian government prefers to stay silent on the denial of due process afforded to Assange at the hands of very close allies is that Canberra is presently involved in some underhanded whistleblower prosecutions of its own.

Right now, Canberra is moving to prosecute lawyer Bernard Collaery in a closed court over his part in exposing our nation spying on the government of Timor-Leste. And former military lawyer David McBride is facing a secret trial over revealing defence documents, known as the Afghan Files.

For the crime of journalism

“No less shameful is the fact that many of those who eagerly use his revelations are not rising to defend him,” Professor Chomsky continued, pointing to the fact that despite having reported on the information that Assange exposed to the globe most of the media has silently watched on since his incarceration.

Wikileaks began sharing the US military files leaked by Manning with five media partners: the Guardian, New York Times, El Pais, Der Spiegel and Le Monde. However, these outlets that profited from publishing the files are now simply looking the other way.

Indeed, most of the world’s media has remained shtum about the prosecution and detention of Assange, despite the Kafkaesque nature of the circumstances, the blatant disregard for justice that’s entirely out in the open, as well as the threat the case poses to press freedoms.

And the fact that the media in general is saying nothing reveals that the persecution of Julian Assange is already having a chilling effect on a free press.

If the US is successful in prosecuting him and throwing away the key a precedent will be set, as government’s with the power to do so will be able to reach out to any corner of the planet to extinguish a voice speaking an uncomfortable truth.

As Chomsky put it, “The basic integrity of a free and independent press is under attack in this disgraceful performance.”

Photo of Scott Morrison by Kristy Robinson under the 4.0 International Attribution licence.

Paul Gregoire is a Sydney-based journalist and writer. He has a focus on human rights issues, encroachments on civil liberties, drug law reform, gender diversity and First Nations rights. Prior to writing for the Sydney Criminal Lawyers Blog, he wrote for VICE and was the news editor at Sydney’s City Hub.