It’s time. Time for Labor and the Greens to say yes to love 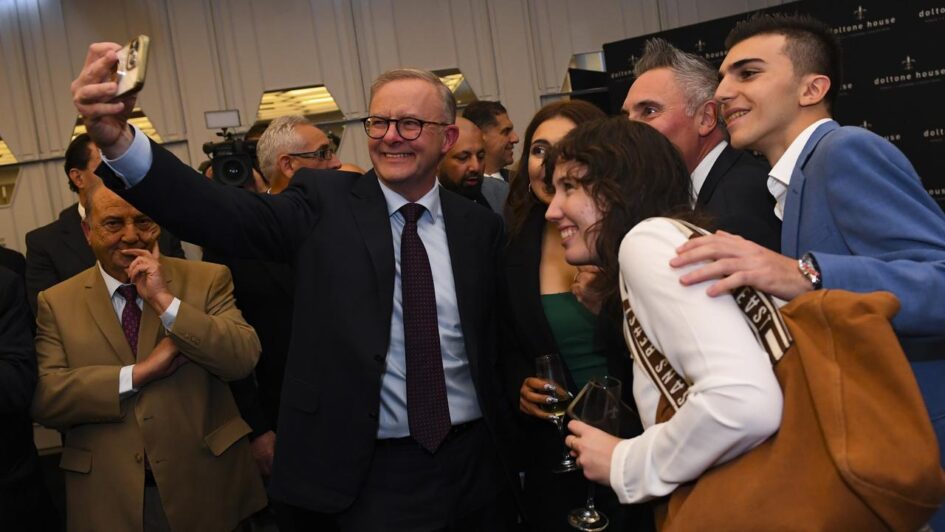 Labor has won a working parliamentary majority in a sullen, angry country. Perhaps more by pure luck than design, Australia has avoided a hung parliament. That’s the good news. But for this Labor government to do us proud, it will have to do something humble. Call the Greens into its fold. There is no alternative in the long term, writes Mark Sawyer.

That’s why it’s time for Labor to do a deal with the Greens in the interests of giving Australians a sustained progressive government.

Why the Greens and not the Teals, who will have more MPs than the Greens? The Teals, enlightened people that they are, represent Australia’s one percenters. Remember that concept? The global financial crisis gave us that term. Even if the GFC ended, the one percenters didn’t go away. The Teals represent those people. Of the 10 most expensive suburbs in Australia, the Teals represent nine. Only Killara sits outside, being in the Liberal seat of Bradfield, and that might go Teal next time.

The Teals represent every Sydney beach suburb north of the Harbour Bridge, every harbour inlet to its east. And their Melbourne and possibly Perth acquisitions aren’t exactly Struggle Street. Their patron saints, Simon Holmes a Court and Malcolm Turnbull, are multimillionaires. Yes we have only one planet, but the Teals’ people have more than one world. Worlds that include Aspen, Gstaad, long-term rentals in London or Manhattan.

The Teals are not the natural partners of a prime minister who grew up in public housing with a single mother on a disability pension, who dedicated his victory to her and people living on public housing today.

For those who believe Labor doesn’t need to do a deal now that Team Albo has burst through the paper like an Aussie Rules footballer, look at the party’s primary vote. To win an election on 32.84% is not a triumph, it’s a warning. Labor needs to heed it. The alternative is Labor being harried from the left, making Albanese a backseat driver in his own government, and Labor’s primary vote sporting a 2 in front of it in 2025.

Labor hasn’t topped 40% in 10 elections, except for the Kevin 07 frenzy, and therefore has lost its claim to speak for half the nation plus one. The Coalition has lost that too, but now they are going into opposition, they can stew on that problem themselves. Labor has to set up a government with a bit more staying power than its last show.

Time to stop being a party of protest, and act their age

As a national party, the Greens are 30 years old. in 2022. And electorally, the Greens have come of age. A nationwide vote of 11.88%, House seats in two states, and impressive gains in the Senate gives them legitimacy like never before.

The Greens are often foolish and mulish. They voted against Labor’s first attempt to put a tax on emissions. But they are Labor’s natural long-term allies. A lot of them left Labor when the party fell in behind the Coalition on the Iraq War and refugees. It’s time to gather them in and set Australia on a path for a durable progressive government. And they have youth and vigour.

An alliance with the Greens now, while the Liberals are flat on their backs, would seal government for three terms and perhaps more. Scare campaigns from the right about the Greens would have no traction.

Labor will be dealing with the Greens anyway, so it’s time to give them seats at the table. The Greens could be given certain portfolios and made to own the failures as well as successes. Make them work the health budget and get dental care into Medicare. Make them work with the states to build affordable housing. The Greens have some great ideas. Make them walk their talk. Make them a party of government, not protest.

The Greens would have to make some concessions, a skill they sometimes keep hidden under a bushel. They would have to fall in behind Labor on national security. They would have to work with Labor to develop a fair and orderly refugee campaign, and persuade the nation of their arguments from within the governing tent.

The Greens have won the support of one in eight Australians. That has to be respected. But the other seven Australians matter too.

Keeping the Teals at arm’s length

An alliance with the Greens would have plenty of benefits, but some risks. It would allow Labor to keep the Teals at arm’s length. That would certainly infuriate the best-connected people in Australia. These are people who don’t hear the word ‘’no’’ very often. They are not used to being left out of the starting XV.  But they have never been Labor’s people.

They are our best educated, the healthiest, the highest achievers, at the pinnacles of medicine, education, academia, architecture, engineering, design, media and law. They are the celebrities, the award winners, the influencers, the tech millionaires, the media personalities, the beautiful people. The funds managers and other money shufflers. The highest priced accountants for the best tax minimisers. The corporate litigators who crush small business rivals with their thumbs. The people with the microphone, the Insta following. The people who can volunteer for a glamorous cause because they don’t have to scrape a living. Their Deliveroos and Ubers come from outside.

Not long ago, the Teal electorates were sending the likes of Tony Abbott and Bronwyn Bishop to Canberra. They are not Labor’s people.

Labor can get with the strength

If Albanese is to stay true to the public housing block he told us so much about, and the mother who raised him on a disability pension, he has to ensure Labor runs a government built on half the nation, not a third. The Greens and Labor won 44.9% of the primary vote on Saturday. That’s a mandate. The people of Warringah, Wentworth, Mackellar, North Sydney, Kooyong, Goldstein and Curtin have never voted Labor, although the last one is named for a Labor PM.

And while the growth of the Teals has been spectacular, it can’t last without changing its shape. In 2025 there may be another harvest of four or five seats. After that, Australia’s little bits of paradise become harder to locate.

Meanwhile the Liberals should forget Peter Dutton and go bold. A female leader would be ideal, but there is no obvious standout. If Andrew Constance wins in Gilmore, he will have taken a rare seat back from Labor for the Liberal Party. That makes him leadership material. That’s the start of a journey back to relevance.

Albanese will have a small majority. Smart leaders govern as if they wield a huge majority anyway. But Labor can’t be credible at its current level of support. Labor and the Greens need to stop being the best of frenemies. Anthony and Adam, it’s time to make it legal.