Assault from the Left: Election result a victory for the Popular Left, despite what you may hear 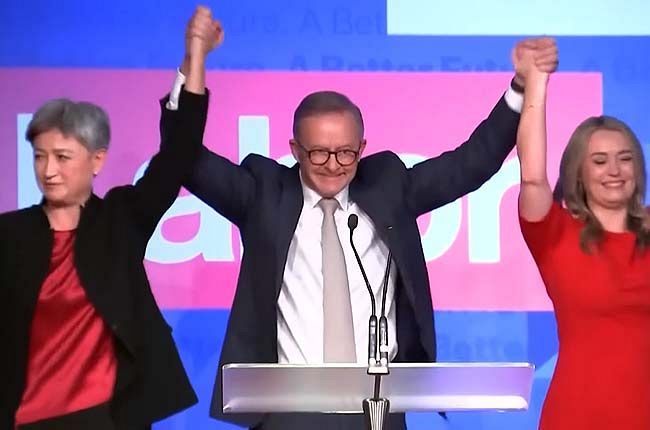 In spite of mainstream media discourse, Dr Martin Hirst argues that the election result was a resounding victory for the popular Left.

IF YOU’VE BEEN watching TV news or reading the mainstream press, you might think that Anthony Albanese actually lost the 2022 Election and that the Labor Party suffered some sort of defeat. Au contraire, dear readers.

Why do I argue that the election of a fairly right-wing Labor Government and a bunch of middle-class women is a victory for the popular Left? Let me explain with a baker’s dozen of short observations.

First, and most importantly, former PM Scott Morrison suffered a humiliating and resounding personal defeat. Morrison was the master of the cynical wedge and took perverse pride in his arrogant dismissal of accountability. On Saturday evening, it all came crashing down around his head. He is singularly responsible for the coalition wipeout.

Second reason: the LIEberals got smashed. They will not form a government again for a decade. Labor’s win is not the start of a Golden Age, but it’s good. The media’s obsession with idea that the absence of so-called Liberal moderates will damage the body politic deserves to be laughed out of court.

Three: the election of the teal Independents and the strong vote for the Greens will be useful in preventing Labor from resiling from urgent action on climate change. We all knew this was a key issue even though the mainstream media was dismissive of the Independents. We can now put pressure on Labor from the Left to deliver.

Australia’s Parliament is not the only institution to have been trashed by the Coalition and corrupt corporate interests over the last decade.

Four: Albo said that Labor will govern for women. After the misogyny of Morrison and the crumb maiden enablers, this is good news. We cannot ignore the teal wave and the powerful role that clever, feminist women have played in undoing the Coalition Government.

The fifth joyful reason that this is a Left victory is that the Far-Right failed to get anyone elected. Despite MP Clive Palmer‘s $100 million worth of dangerous lies, the United Australia Party didn’t make any gains. The UAP “leader”, Craig Kelly, lost his seat. It looks like Senator Pauline Hanson is gone, too.

That is fantastic for us. After the shocking rise of the Far Right and outright Nazis last year during the lockdowns, it’s good to see that the Left-leaning vote was far ahead of the Right’s in every electorate where it was a contest.

Six: in spite of Morrison’s hateful embrace of transphobia and conservatives weaponising the LGBTQI community, Liberal candidate Katherine Deves got smashed in Warringah and MP Zali Steggall made it unwinnable for the Liberals for a decade. This is a win for gay, lesbian and transgender kids around Australia. It is a poke in the eye for the horrible religious bigots and pious zealots who were pushing a fake “discrimination” bill and baying like demented hounds for the Right to beat on transgender kids.

Cause for celebration, number seven: The Liberals are in disarray and decimated. The hypocrite and grifter, MP Tim Wilson, is gone; the Zionist apologist MP Dave Sharma is gone; the bullying economic girly man Josh Frydenberg is gone; the crazed Tasmanian Senator Eric Abetz is gone and the future isn’t looking sunny for Queensland Senator Amanda Stoker. Australia’s public life will be better in their absence.

Eight: the Murugappan family is going #HomeToBilo. This is fantastic and a victory for refugee activists. Torturing this Tamil family was a cornerstone policy of the Morrison Government and a symbol of his personal cruelty. This is a slapdown for Morrison and his acolyte Pentecostal mate and former Immigration Minister, Alex Hawke.

Nine: If you actually cut the total number of votes cast on Left-Right lines, the broad Left made significant gains. I include the teals in this “broad Left” category and obviously the Greens. It also includes the small socialist groups — Animal Justice, the legalise dope groups and others.

The ten spot. Among all this carnage it looks like the rump of the Liberal Party will be forced to choose Peter Dutton as its leader. He is perhaps the second most hated politician in the country after Scott Morrison. If he becomes leader, the Liberals will not win the next election.

Legs 11: there will be a federal anti-corruption commission. This will (hopefully) hold Morrison and his gang of thieves to account for the rorting and criminal misappropriation of money that took place over the last decade under the Coalition.

Twelve: In his victory speech, the incoming Prime Minister committed the Labor Government to implement the Uluru Statement from the Heart. As the new Indigenous Affairs Minister, Linda Burney has acknowledged this will be a patient and necessarily slow process but it is a seismic shift in the public consciousness and a long-overdue rebuttal of the Coalition’s racist domestic dog-whistling.

A baker’s dozen (13). Labor has promised to scrap the Indue Card, too. This is also a win because the Indue Card not only enriched Liberal party donors, it humiliated and impoverished thousands of working-class people who were forced onto welfare through no fault of their own.

The media class got it wrong

The media doesn’t cut it this way because it doesn’t suit its narrative that Labor is doomed in 2025. Why even are journalists yabbering about the next election already? Because this is the narrative they’re paid to supply. Journalists are not friends of the broad Left. What we have to do now is make sure Albo delivers and doesn’t bend to #NewsCorpse grave robbers.

Broadly speaking, journalists are propagandists for a ruling class view of the world. This is Noam Chomsky‘s ‘Manufacturing Consent’ thesis and it is accurate enough for our purposes. The ruling class is rattled by this Labor win because it is a victory for the progressive Left.

To continue this point, the election result is not good for the ruling class because it signals that the Australian electorate wants action on climate change and at a faster rate than capitalism is comfortable with. This is a win for the Left and a win for the planet.

The Australian ruling class is propped up by the global fossil fuel industry — coal, gas and to a lesser extent, oil. The election result is a kick in the teeth for them. Labor is not perfect on climate (far from it) but it is now under pressure from its Left flank on this.

Don’t be demoralised by the ruling class media. Its journalists necessarily lie to please their puppet masters. We won! They lost! Good people are celebrating the Election as a victory for the broad Left. You should, too.

We did a good job. Morrison is gone and his nasty, vindictive and corrupt Government is gone, too.

There is still a lot of work for progressives to do, but we must take a moment to celebrate. I find it particularly delicious that the terminally deranged ghouls on the News Corp payroll are shitting themselves with outrage live on television. We did this to them.

The covering up of corruption by the media is highlighting the importance of independent journalism more than ever.

Finally, let me just explain my use of the term “popular front” in this commentary.

A popular front is the coming together of social forces around a common cause but without any central leadership. It is organising in a spontaneous way around a single political objective. In this case, the objective was getting rid of the Morrison Government.

Historically, the popular front has been a tactic of anti-fascist organising and it has a mixed political history. I am using it in this context to characterise a particular conjuncture in which a cross-class alliance of workers, middle class liberals, bourgeois feminists and reformist climate activists have joined forces to defeat a common enemy.

A popular front is inherently unstable because of the competing class interests that make up its diverse membership. The popular front is not ultimately a vehicle for revolutionary politics, but I think it is worth acknowledging and celebrating in this moment. The real importance and historical significance of Labor’s win on the weekend may not be fully understood for some time but, without doubt, it is important and worthy of celebration.https://www.youtube.com/embed/FbUG1aPeKtU?rel=0&wmode=opaque

Dr Martin Hirst is an Independent Australia columnist, journalist, author and academic. You can follow him on Twitter @ethicalmartini.