Is The NSW Government Becoming a Hobessian ‘Leviathan’? 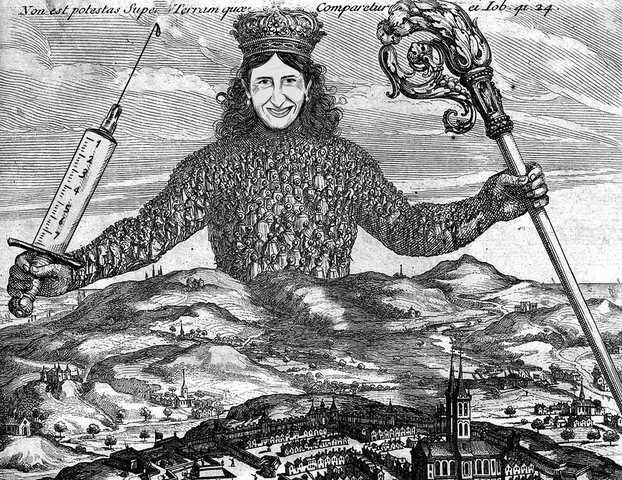 Gladys Berejiklian, the Premier of New South Wales, announced at her most recent press conference that the government is working on a “proof of vaccination app”. This will in effect take the place of the current QR Code by supplementing it with an affirmation that the individual has also been vaccinated. Significantly, Ms. Berejiklian said:

We are asking industry to dust off their COVID safety plans, get the QR Codes in check, and we’re also working on an App in NSW that will allow you to sign into a venue but also have proof of your vax all in one to make it as simple as possible, and we’ll have more to say on that in the coming weeks.

This is a massive development in the ever-enlarging powers of the NSW State government. Something which over the past eighteen months has growing into something resembling a Hobbesian ‘Leviathan’.

Glenn S. Sunshine explains the symbolism of the political imagery well in his book Slaying Leviathan: Limited Government and Resistance in the Christian Tradition Canon Press, 2020):

The title of Leviathan seems to have been chosen from what was believed to be its etymology: it was thought to come from the Hebrew lavah, meaning “to couple, connect, or join” and thannin, meaning “serpent or dragon”. The creature was called leviathan either because its size made it hard to believe it was a single creature, or because its scales were tightly pressed together.

The image of the state on Hobbe’s frontispiece was of a giant man holding a crozier (for ecclesiastical power) and a sword (for civil power), with a body made up of three hundred smaller men, all facing inward except one face looking outward. The state is thus depicted as a single entity made up of individuals bound together in an omnipotent, immortal, and indivisible whole under its head, the king.

Strangely, Hobbes didn’t seem to envision that the Leviathan might also have the head of a woman or, ‘Queen’. But this is precisely the type of situation which has arisen in NSW. Over the course of the COVID-19 pandemic, the state has assumed more and more control.

Shutting churches, made the celebration of a weddings illegal, closing down construction sites and small businesses, introduced a nightly curfew in affected local government areas, with police using rubber bullets to control civilian protestors, and now the announcement of mandatory vaccinations for those in teaching, all in the name of public health and safety.

In a significant display of political overreach, a church in western Sydney was not only fined approximately $50,000 for physically meeting, but was also banned from operating for seven days. This has the effect of preventing the church from meeting in any form, either physically or online.

What’s more, the NSW Police Deputy Commissioner Gary Worboys was reported as saying in the Sydney Morning Herald that online church services are also being actively monitored: As Worboy stated:

I can reassure the community that there is every effort going into those particular church services that are coming up on streaming, and pieces of information that are saying other church services are going to occur.

Clearly, the Berejiklian government has surreptitiously assumed sovereign control of both the ecclesiastical and civil spheres. But how did this dystopian scenario arise?

James P. Pinkerton persuasively argues in The American Conservative that “it’s the fear of chaos — including, but certainly not limited to, public health — that grew the state in the first place, and its continuing fear that keeps the state big… [and that] as long as there’s fear, there will be… Leviathan”.

John Horvat goes even further explaining how we have arrived at a Hobbesian vision of COVID-19. As Horvat writes:

The policies that deal with the coronavirus crisis are oriented to this toxic philosophy. Present measures are based on Hobbes’ irrational fear of death taken to an extreme. Today’s Hobbesians hold that the greatest good is life itself, and everything must be done to avoid dying.

Thus, when the coronavirus crisis struck, everything went into lockdown. The idea was to avoid all risks, no matter how remote or small. The minute a possible COVID case appears, for example, the whole area must be sanitized.

Everyone contacted by the COVID patient must self-quarantine. A sense of panic prevails. No risk must be left unaddressed. The most absurd measures are taken to prevent the slightest possibility of a single death.

Thus, there were hundreds of counties across America in which no one died of COVID. However, they were locked down, and their commercial, social, and religious lives completely disrupted. Walmart stayed open, but churches were shut down despite the lack of evidence that religious service spreads the virus any more than consumer shopping does.

The irrational fear of death created an atmosphere of paranoia. The enforcement of health regulations became rigid and uncompromising. The draconian rules excluded common sense and allowed for no exceptions.

This irrational fear of death is unnatural and the cause of high stress. It eventually leads to conflict with those who question the wisdom of suppressing most activities. That is why this Hobbesian COVID-19 view requires Leviathan, the dictatorial state, coercing enforcement of capricious rules. Leviathan is needed to keep people compliant through fear of death.

The COVID crisis gave rise to socialistic government policies that seek to control lives in the name of saving lives. It threatens society with a cure that is far worse than the disease.

Sadly, churches have largely acquiesced to nearly everything that has been imposed by the NSW government. They have done this not only out of love for neighbour, but to rightly honour the governing authorities whom we believe God has placed over us for our good (i.e. Rom. 13:1-7).

But for many, the implementation of a vaccine app (i.e. passport) is a bridge too far. Just note the following open letter from a range of senior Christian leaders in the UK arguing against the imposition of vaccine passports:

We draw your attention to the recent Judicial Review overturning the Scottish Government’s ban on public worship, which demonstrates that such disproportionate prevention of the right to worship is a clear infringement under Article 9 of the European Convention of Human Rights.

We cannot see how any attempt to prevent people gathering for worship on the basis of either testing or non-vaccination would not similarly be ruled to be a breach. We agree with those members of Parliament who have already voiced opposition to this proposal: that it would be divisive, discriminatory and destructive to introduce any such mandatory health certification into British society. We call on the government to assert strongly and clearly that it will not contemplate this illiberal and dangerous plan, not now and not ever.

It’s time that Christian leaders in Australia also called on the government to avoid making the same illiberal mistake. Not only must the issue of freedom of conscience be respected, but the state must not take on more power than it should.

And as such, it is completely inappropriate for the state to create a two-tiered society of medical apartheid. The growing power of ‘Leviathan’ must be countered, lest a monstrous tyranny ensue.

Mark Powell is associate pastor at Cornerstone Presbyterian Church, a multi-site church in Strathfield, NSW. He and his wife have six children. Mark is a passionate advocate for faith, family, freedom and life. He is a gifted communicator and has made various appearances on radio and TV. Mark is unafraid to graciously speak the truth about contentious issues. He contributes to numerous online publications including The Spectator Australia, where his articles often appear in the most popular list.