How It All Ends: Australia Transforms. Part One. 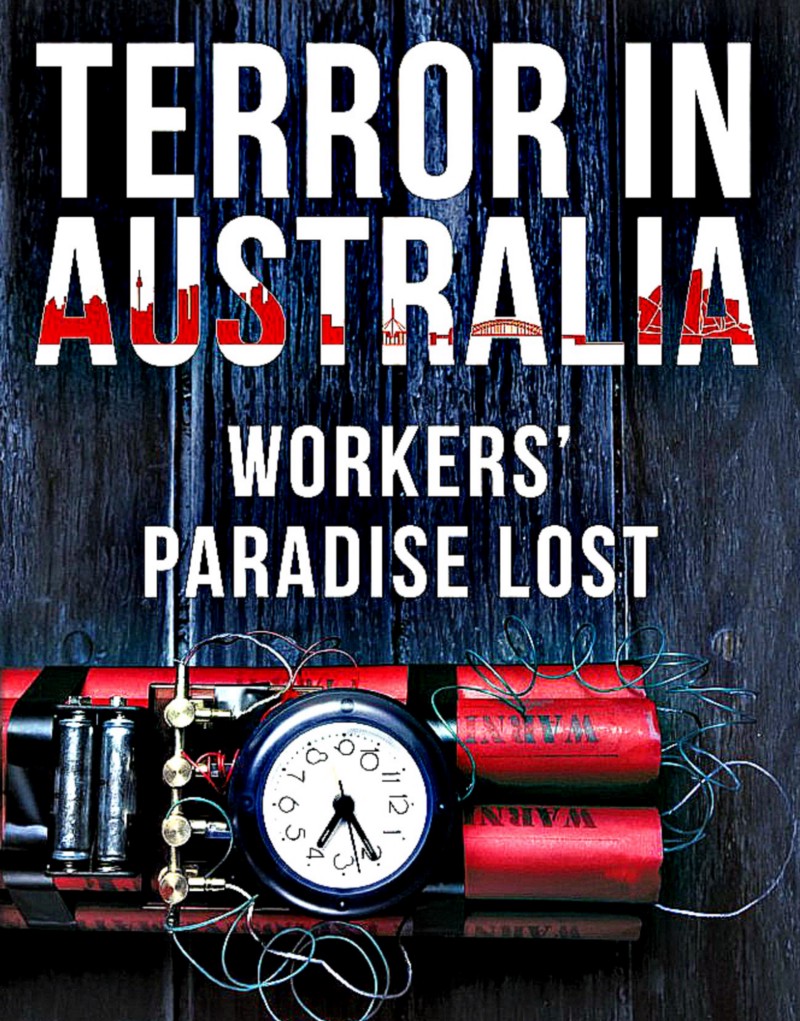 For years the biggest story in the country has been the slow motion collapse of the Australia of old.

Now, with the country only slowly stumbling out of lockdown and insane levels of social restrictions introduced without parliamentary approval in what was tantamount to martial law introduced, under the cover of Covid-19, it has all come to pass, seemingly in an instant.

The four books I have written on this pivotal point in Australian history, Terror in Australia: Workers’ Paradise Lost, Hideout in the Apocalypse, Dark Dark Policing and Unfolding Catastrophe: Australia, all warn of a darkening time. I felt compelled to write them, I was never quite sure why. Now, when I look back, it is as if someone else actually wrote them; that all I did was act as a transmission point.

These are darkening times, and these books, switching from street scenes to fantastical flights of the imagination to reportage have a certain prophetic tone to them. Shocking even to me, who wrote them, is how quickly it has all come to pass.

Here is the finale of the first book in the series, Terror in Australia: Workers’ Paradise Lost.

The books, by the way, are written in the third person. Alex is a dishevelled retired newspaper reporter who bears a passing resemblance to the author.

“It’s terrible what’s happened to this city,” Old Alex said to the Vietnamese woman making his coffee at the late night cafe in Kings Cross, once a vibrant entertainment district in the heart of Sydney.

“You not only one say terrible,” she said. “Many people say same. The government, so many rules.”

Alex was sad, he explained, because he had been born here; had some identity with the country. The city he once treated as his own backyard was lost.

“Maybe it get better in the future,” the Vietnamese woman said, handing him his coffee and his change.

Walking back to the office where he commonly worked from midnight to dawn, a time when the buzz of humans all around him was less intense, he passed, again and again, derelict scenes in the street; and wanted to be long gone.

A group of Middle Eastern men drove past in a spanking new Bentley. They barely noticed the societal collapse they were driving through; more than comfortable inside their own world. You didn’t drive around this town in a brand new Bentley because you worked nine to five. This was a city where crime had always paid.

Walking once again past the promotional “Building the Future” signs erected by the Sydney City Council, he knew for certain: this was Paradise Lost, and it was never coming back.

Screwed by the left and screwed by the right. Jihad within and jihad without. Terror within and terror without. The freedoms of thought, expression, conduct, enterprise, character which had once been so much a part of Australia had vanished.

Signs and portents were everywhere.

For some reason an expression by a rough sleeper he had become friendly with in the Nepalese lakeside city of Pokhara kept popping into his head:

“You think you the only tiger in the jungle. Not possible.”

The fanatical, the fantastical and the theological, all had far too much to do with the present circumstance. Alex scanned the news and despaired. He read easily accessible advice to jihadists on the best smartphones and encryption programs, while the Australian government pounded on about terror.

Increasingly appalled, he read account after account of massacres, tortures, murders, looked at pictures, as millions of people in the West had done, of those about to die.

Imagine a world where it was impossible to lie?

In those days before, Alex sincerely hoped, an ultimate grace settled upon mankind, a grace that would not be at the behest of any faith, that would not be held within the frame of any belief, there were too many deaths, too much butchery. In that microcosm of Australia where he had been born, a depressed population, muttering in its own frustrations, abandoned all hope that the wider world would ever make sense and watched football instead.

“There are more things in heaven and on earth, Horatio, than are
dreamt of in your philosophy,” went the Shakespeare line, while the
words “Apocryphal” and “Apocalypse” shimmered in the middle
distance.

The world he had known was gone.

“Be happy that you knew it,” an old friend advised when he expressed his anger at the empty streets, the impoverished state of the country, the hapless state of the media, the gathering strength of the Sharia, the contempt for native spiritualities, the barbarians inside the gate, the horror that had enveloped the world. “Be grateful that you knew it when it was good.”

Alex, he would sometimes mutter to himself, was dyslexic across time and space. Tell him to do one thing and he would do another, turn left and he would turn right. He didn’t like being told what to think, on spiritual matters or anything else. Nor had most of the people he had ever known.

“Be happy,” he thought, “that many of your friends died before they could be stoned to death. Be happy that they weren’t faced with the choice, convert or die. Be happy that as apostates they weren’t crucified or beheaded. Because they would never have converted. It wasn’t in their nature.”

Over his lifespan he had seen the wheel turn several times: everything he and that initial little band he had partied with so hard back in the sixties and seventies had believed in, all of it had been dumped from the buckets of the Ferris wheel into a vacant allotment. The rise of the wowsers. The rise of middle class probity. The rise of the politically correct. The rise of the Christians. The rise of Islamic State.

This time around it wasn’t just melancholy at the loss of a few souls, or the loss of a scene or demimonde. This time around he grieved for the loss of everything, his home, Australia, a place, the spirits of old, the landscapes that had breathed a timeless spirituality and the inner-city demimondaines which had breathed a licentious thrill, a place where all delinquent, time-sliding souls met before departure; in the once crowded streets which had been so much a part of his youth.