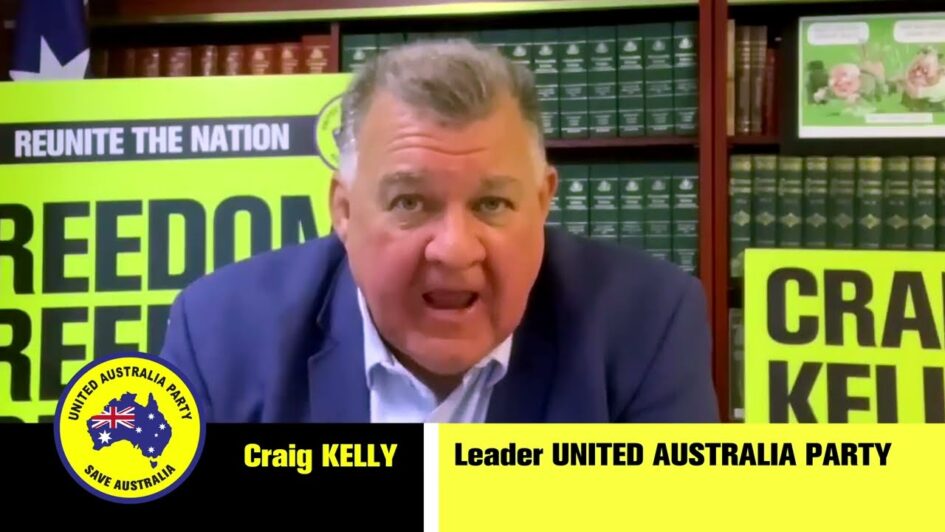 Widely condemned as a conspiracy theorist, no one has been more marginalised by his own side of politics, nor ridiculed in the public square, than United Australia Party’s Craig Kelly.

Originally joining the nation’s ramshackle conservatives, the Liberal Party in 2010, he resigned in 2021, disgusted by his own mistreatment and by their mismanagement of the Covid scare.

As the Covid narrative unravels worldwide, with universal outrage over the conduct of politicians, bureaucrats and pharmaceutical companies, no one has been more vindicated.

Everything about the Covid tyranny which overtook the country is now under suspicion, everything from masks to contact tracing, lockdowns to vaccines, school closures to social distancing. Everything.

The pathetic state of Australian journalism and the outrageous censorship of dissenting views by social media platforms means that freedom lovers and independent minded thinkers are migrating en masse to less censored platforms.

Infantilising a population by protecting them from views that don’t accord with government propaganda, as has happened in Australia, is massively damaging to the social fabric. The chorus of dullards chanting “keeping Australians safe” need their heads read.

Once an outlier and very much a pariah, as revelation after revelation fuels outrage around the world over Covid malfeasance, Craig Kelly finds himself in the middle of a rushing torrent.

They said the hospitals and the ICU’s would be ‘’overflowing with the unvaccinated’’.

Their lies misled people, deceiving them into injecting an experimental genetic agent into their bodies.

And a substantial number of these people that were deceived by their lies, suffered live-changing injuries or died from the experimental shots – which they would have never subjected themselves to if they were told the truth.

NO AMNESTY FOR TGA

When we have such a huge numbers of studies which have found Ivermectin is associated with statistically significant improvements for mortality, ventilation, ICU admission, hospitalization, recovery, cases, and viral clearance – and the TGA have acted to prevent Australian GP’s prescribing Ivermectin and continue to do so, there can be no amnesty.

Let’s be clear, the TGA have acted to deny sick Australians access to a safe, effective & low cost medicine – and have so citing the most of pathetically laughable reasons. This is a crime against humanity.

These people must be investigated and prosecuted.

Goodstart Early Learning abused Human Rights and violated the Numerberg Code by using coercive mandates – forcing their staff to undergo a medical intervention using an experimental vaccine, which they implemented at a time the data clearly showed that these injectable products neither safe nor effective.

If the Bill (No Domestic Vaccine Passport Bill) thstI introduced into Parliament was passed, such mandates would have been illegal. But Liberals, Nationals (with exceptions), Labor and Greens all voted against it.

Now Goodstart Early Learning have a previous fit and healthy employee that joins the ranks of ‘’died suddenly’’ and 3 young kids will grow up without their mum.

And to think, this toxic poison is still being mandated.

And the criminals that lied to push these shots now want amnesty.

Almost 2 years ago I was publicly attacked and vilified for questioning the covid injections and saying I wouldn’t subject my son to be injected with an experimental genetic agent that that zero long term safety data.

And now, the Florida Surgeon General, the giant of a man Joseph A. Ladapo, MD, PhD confirms that I was right.

Over on Twitter, my page ‘’ABSOLUTELY NOT’’ is trending.

Maybe Musk has taken the hand-brake off.

ABSOLUTELY NOT – NO AMNESTY FOR COVID CRIMINALS

The time for considering any amnesty has long past. Too many have died.

💰Those that lied about “safe & effective”

💰Those that demonised Ivermectin or Hydroxychloroquine

💰Those that falsified or hid data

💰Those that push the use of Remdesivir

…. all have the blood of thousands on their hands.

No Amnesty – they all must be held to account for their crimes and prosecuted.

How can John Skerritt continue to ignore the peer-reviewed science and deny Australians access to Ivermectin through their GP.

I again call on John Skerritt to apologise to all Australians for this conduct and resign.

SHAME ON THE AUSTRALIAN MEDIA

How can anyone trust the Australian media when they refuse to report on the unprecedented & tragic number of excess deaths that are occurring in Australia?

In the first seven months of the year, we’ve have 16,375 excess deaths – without explanation.

This should be front page news. It should be the lead item of discussion on every talk back station.

Why is the entire media silent (except for Rowan Dean on Sky) ?

Why are the media not even publishing the data, let alone asking questions ?

Why are the Liberal Party not demanding answers from the Labor Government ?

The only conclusion is that they fear the excess deaths could be from adverse events of mass vaccination roll out – and they know they are all complicit.

Every ‘journalist’ in Australia should be embarrassed by this.

As Charles Mackay wrote in his book Extraordinary Popular Delusions and the Madness of Crowds back in 1841,

‘’Men, it has been well said, think in herds; it will be seen that they go mad in herds, while they only recover their senses slowly, and one by one”

And it looks like Ben Shapiro is the latest to recover his senses. But the only problem is, you can’t ‘un-Vax’ yourself – your body is now a spike protein factory.

I wonder who will be next ?

‘’Every age has its peculiar folly—some scheme, project, or phantasy into which it plunges, spurred on either by the love of gain, the necessity of excitement, or the mere force of imitation.”

“During seasons of great pestilence men have often believed the prophecies of crazed fanatics …… Credulity is always greatest in times of calamity. Prophecies of all sorts are rife on such occasions, and are readily believed, whether for good or evil’’

What I said 2 years ago. (https://www.theguardian.com/australia-news/2021/feb/12/facebook-removes-craig-kelly-post-claiming-children-wearing-masks-is-akin-to-abuse)

‘’The detrimental effects of masking on the mental health, development and education of children in classroom settings is well understood’’

It’s time for I’ll-informed bumkins like Labor’s Steven Miles to apologise for the harm they’ve inflicted on children by their ignorance of the science.

When our nation needed politicians to speak up and protect our children – instead we had weak insipid men like Steven Miles in charge.

THE GLOBAL NARRATIVE CONTINUES TO COLLAPSE

We are winning. The Covid criminal are on the run. The truth had caught up with them. They have nowhere to hide.

Negligent manslaughter charges should be levelled against politicians like Dan Andrews that continue to prevent healthy experimental vaccine-free paramedics from working — because it is reasonable foreseeable that this policy will result in deaths of Victorians waiting for an ambulance.

Italian healthcare workers who were suspended from their jobs for not choosing to receive the coronavirus vaccine (https://www.foxnews.com/category/health/infectious-disease) will soon be reinstated, the country’s health officials said. Fines issued to people who decided against the vaccine will also be cancelled.

“As we look back over the last 29 months … what has been the biggest lie?”

“Oh, that’s a difficult question because there’s so many,” responded Dr. Harvey Risch, “To me, the biggest lie is the FDA webpage on hydroxychloroquine.”

Why was the suppression of HCQ so detrimental?

• Because “This was the crux of the whole pandemic in the first place.”

• “Had this medication been used at the outset of this pandemic, it would have saved hundreds of thousands of lives that were needlessly lost.”

There needs to be a criminal investigating into every Government that acted to denying sick Australians access to Hydroxychloroquine – including Jannette Young in QLD who made it a criminal offence (6 months jail) for a doctor to prescribe HCQ, the TGA and National Covid Evidence Task Force – THEY ALL HAVE BLOOD ON THEIR HANDS.