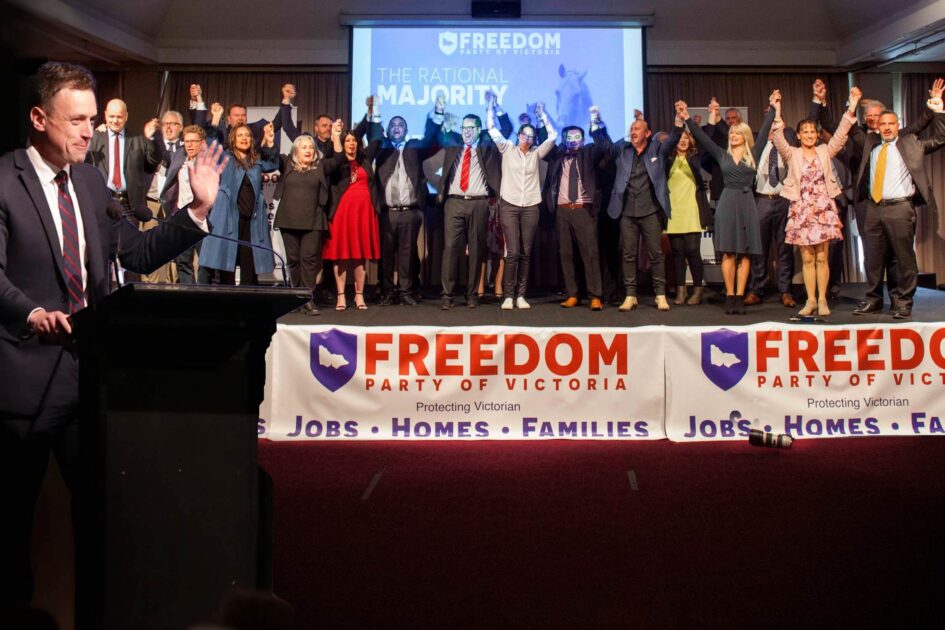 Australia experienced one of the most extreme and counterproductive Covid responses of anywhere around the globe, and as a direct result of the totalitarian lunacy which overtook the country, its politics have changed profoundly.

The Premier of Victoria, Daniel Andrews became infamous around the world for his completely over-the-top response to the Covid scare, including pepper spraying protestors and arresting pregnant women in their own homes. He well and truly earnt his nickname Dictator Dan.

The most divisive figure in Australian politics, Daniel Andrews is utterly despised by freedom loving Australians, and simultaneously cheered on by the totalitarian left “I’m with Dan” crowd, the latter leaving the rest of the country shaking their heads in disbelief.

Daniel Andrews is now fighting for his political life, with the polls moving against him in the final weeks before he faces a state election on the 26th of this month.

Not least of his opponents is the Freedom Party of Victoria, led by activist and broadcaster Morgan Jonas and former politician turned teacher Aidan McLindon.

Founded earlier this year, born out of the fires of the Freedom Movement, it is already arguably the fastest growing party in the country. Achieved with very little mainstream coverage.

With 52 candidates, sixteen of these running for the Upper House, the Freedom Party is the political manifestation of a grass roots movement that grew out of the protests where over 500,000 Victorians over a period of two years hit the streets of Melbourne. They were protesting the dictatorial policies being pushed through Parliament with total disregard for the will of the people.

As is being reported overseas, but not in Australia, excess deaths in Victoria are now running at an unprecedented 27%, a direct legacy to which both Daniel Andrews and the Prime Minister have turned a blind eye. Across the country, according to the Australian Bureau of Statistics, the figure is 17.1%.

There are similar levels of excess deaths now showing up in America, US, UK and Europe, correlating almost exactly with the heaviest vaccinated regions.

There is only so long the nation’s politicians can ignore this catastrophe enveloping the country.

“As State Leader for the Freedom Party of Victoria I will ensure our focus remains on the Vision of protecting Jobs, Homes and Families. These core values are central to a strong and resilient Victoria, one where all can contribute freely, maximize their potential and play a role in making our State a better place to live, work and grow together.”

Victorians must no longer suffer at the hands of career politicians who have lost touch and are not truthful, transparent or caring.

“Freedom Party of Victoria proudly stands for a Victoria that is served and governed with integrity, respect and inclusion. This will be conducted in a manner that upholds and supports the enhancement of lives, wellbeing and freedoms of all Victorians.

“Our policies directly reflect our commitment to protect local businesses and jobs, establish access to affordable homes and ensure an optimum quality of life for all Victorians.”

The Freedom Party of Victoria was developed from a deep desire to create a Victoria where the lives, wellbeing, opportunities and freedoms of all people are respected and supported. This is upheld by a proud and passionate group of dedicated Victorians who will work towards a State of opportunity, optimism and strength.

Billboards, flyers, social media messaging and community meetings all deliver the same message. Here is a summary of the Freedom Party’s platform.

The future generations are at stake.

Honesty, integrity and transparency are the hallmark of this emerging power into the Victorian political arena, something that has been sadly lacking for many years.

Morgan Jonas exposed Glenn Druery, otherwise known as the Political Whisper, who single handedly controls preference deals in Victoria ( if you have enough to pay him, and are unethical enough to do so)

Each day a new “High Noon @ Noble” is shown live on Facebook, with a growing following which in true Freedom Party form is educating us on key issues.

Damien Richardson, actor turned political activist, is running as the Upper House candidate for the Northern Metropolitan Region of Victoria. He said the excess deaths were “a nightmare for anywhere in the West, NZ, Canada, America”.

Richardson was driven to join the Freedom Party as a direct result of the Covid mania which overtook Victoria, Australia’s second most populous state.

“It is an unmistakable agenda,” he says. “Once you see it you can’t unsee it. I couldn’t be silent anymore, I’ve got children, I felt I was betraying them, my silence was complicity.

“There’s a bigger crisis; the way society has been structured is failing. People are questioning it. A large cohort is reluctant to go on with it. What happens when you talk? The world doesn’t open up and swallow you whole, but it transgresses whatever passes for polite society.

“We have all been complicit in this. If we remain silent that is going to lead to our own slavery. I would rather die on my feet than live on my knees.”

As a former actor, Richardson still finds inspiration in the famous Hamlet soliloquy: