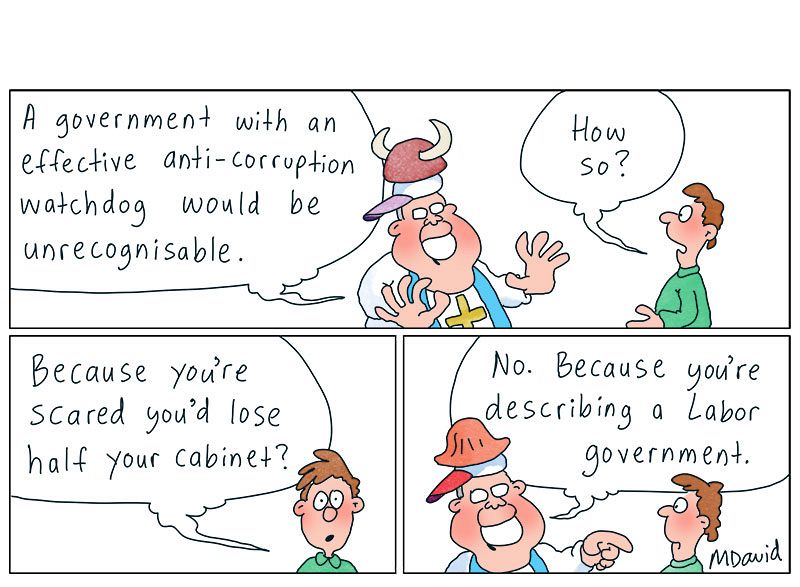 By governing for the few and treating Australia to the misuse of public funds, rorts and a lack of transparency, the Coalition ensured our worst-ever score on the international corruption index, writes Augustine Zycher.

THIS IS THE first Australian election in which the integrity of government featured as a key election issue and played a part in the change of government.

So, how should we measure the integrity of the L-NP Government under Prime Minister Scott Morrison?

One measure is Australia’s ranking on the international index of corruption. The latest Corruption Perceptions Index (CPI) gave Australia its worst-ever score and lowest ranking.

An Independent Commission Against Corruption (ICAC) at the federal level would have scrutinised the misuse of public funds, rorts, slush funds, pork barrelling and lack of transparency. But Scott Morrison successfully avoided honouring his 2019 election promise to establish one. We await the announcement of an ICAC from Prime Minister Anthony Albanese.

Is it any wonder that, despite promising to introduce one, the Morrison Government has voted against a federal integrity commission 31 times?

By this measure, the L-NP Government under Scott Morrison corrupted its mandate to govern in the national interest. It did so in two basic ways.

First, it governed by dividing the Australian population into adversarial camps and favouring one camp over the other.

Secondly, it divested itself of some of the fundamental roles and responsibilities of government — it shrank the mandate of government.

In effect, the Morrison Government divided the nation into those who were worthy of receiving government support and public funding and those deemed unworthy.

This was determined by a deeply ingrained ideological mix of neoliberal conservatism, religion and toxic masculinity. It gave preference to personal, party and sectarian interests that furthered the Government’s primary purpose of retaining power.

This attitude was clearly demonstrated in the way public funding for the vulnerable was labelled “welfare”. The Morrison Government constantly sought to curb what it considered to be a drain on the budget by “non-productive leaners” in society.

Relentless, illegal measures such as Robodebt were used to claw back any suspicion of overpayment of “welfare”. The scheme drove many people to suicide and actually ended up costing taxpayers $2 billion.

Even when the Morrison Government was headed out the door days just before the Federal Election, it carried out one last act of cruelty toward welfare recipients. As of July this year, all those on JobSeeker will have to fulfil a draconian “Points Based Activation System” (PBAS) for mutual obligations.

It is impossible to do this without access to the internet. Women aged 50+ constitute the majority of those on JobSeeker. On $46 per day, they cannot even afford housing or adequate food let alone the internet. This points system will strip them – and chronically ill and disabled people who are on JobSeeker – of even this below-subsistence-level income.

By comparison, the use of taxpayers’ funds for wealthy, corporate and allied interests was abundant and characterised as productive, irrespective of any evidence to the contrary.

The Morrison Government consistently brushed aside suggestions that it recoup $40 billion of taxpayer funds lavished without scrutiny via JobKeeper on profitable businesses.

Taxes were skewed so that proportionally a nurse pays more tax than giant gas corporations. New analysis of data published by the Australian Tax Office (ATO) shows that five of the gas industry’s most prominent companies have paid no income tax for at least the past seven years, despite a combined income from their Australian operations of $138 billion.

This is not about “small government”. It is about a government that favoured the few.

While other nations step up to zero-emission targets, Scott Morrison is still falling behind on taking action and being a responsible leader.

The previous Government’s failure to develop and implement a comprehensive climate change policy is a glaring demonstration of this same preference to serve fossil fuel and political and vested interests over the national good.

Hard to forget the “payoff” in public funds that Barnaby Joyce received for giving the Prime Minister permission to attend the G20 on climate change. Nor the seemingly unlimited public funds allocated to subsidise fossil fuels. Meanwhile, those who were deemed to be not so worthy were left with burnt or flooded homes, bereft of government support and funding.

The Morrison Government also managed to cleave the country in two along gender lines.

PM Morrison’s “women’s problem” was a direct consequence of the ideological bias of his Government. That is why his Government would not support gender pay equality or fully funded childcare.

The Government’s priority was to protect its ministers against historic and recent allegations of rape, sexual abuse and violence. This was also why the Morrison Government ensured Parliament would not adopt all the recommendations of the ‘Respect@ Work: Sexual Harassment National Inquiry Report (2020)‘.

And when women protesters converged on Parliament House from around the country, the Prime Minister refused to even step outside to listen to them. So they delivered their rage through the ballot box.

The second way in which the Morrison Government corrupted its mandate to govern in the national interest was by increasingly divesting itself of the fundamental roles and responsibilities of government. Health, housing, aged care, employment and education were neglected, drastically underfunded, outsourced or privatised under the L-NP.

“It’s not my job” became the common refrain from Prime Minister Morrison.

‘The Australian Constitution‘ mandates that the federal government is responsible for aged care. But the Morrison Government chose to offload this responsibility onto private operators. These operators were generously compensated with public funds without proper oversight. And as the Royal Commission into Aged Care, Quality and Safety found, led in consequence to an appalling state of overall “neglect” in aged care.

Despite all this, one of the last announcements of the Morrison Government was that aged care operators would receive an extra $3 billion in government funding to improve food. But they were assured that they do not need to provide “spreadsheets or evidence”, even though a third are still spending less than $10 a day per person on food.

Another government responsibility that was stealthily outsourced is pensions. The Morrison Government was bent on handing control of pensions over to private operators and severely restricting the use of these cards by pensioners. Over $170 million of public funds were funnelled into the pockets of the private operators of the Indue card. One of the first acts of Labour’s Minister Amanda Rishworth has been to quickly abolish this card.

Medicare cuts prove the Coalition is bad for our health

Recent sweeping changes to Medicare rebates have been rushed through under cover of night, with scarcely a murmur from the Morrison Government or its media cheer squad.

The L-NP Government actively undermined universal healthcare by stripping 900 items from Medicare and left hospitals at the point of collapse.

Universities and public schools were starved of funding while $769 million in JobKeeper was made available to private schools.

No funds were allocated to build social housing in recent government budgets. Nor were there any policies to address housing supply and affordability. The last-minute Election-eve announcement about allowing people to raid their super funds was another example of a government taking no responsibility to solve a crisis, but handing the task over to the individual.

A Government that was actively shrinking its constitutional responsibilities was never going to initiate a referendum to change ‘The Constitution’ to enshrine a voice for First Nations people.

Not only did the L-NP Government narrow its responsibilities to further the nation’s welfare, but it also hollowed out the institutions and instruments of government. The public service was denigrated, slashed and circumvented by a Government that preferred to fund a costly stable of private, compliant consultants, devoid of scrutiny. Just days before the Federal Election, the Government announced it would cut a further 5,500 jobs from the public service.

After three years of the Morrison Government, Australia has been left with growing inequality and constricted national aspirations. The Coalition left a policy vacuum and a lack of ambition and direction at the national level. It saddled the country with extraordinary debt with little to show for it. It contributed to social fragmentation and levels of poverty and homelessness that Australia had not previously experienced.

It increased the alienation of growing numbers of people because inequality seems insurmountable. It undermined trust in government and the belief in social justice.

Democracy is eroded when governments subvert their mandate to govern in the interests of the whole population.

Government for the few is government without integrity.

Augustine Zycher is a journalist and founder of WomanGoingPlaces, a social enterprise advocating for the economic security of women aged 50+. You can follow Augustine on Twitter @wgpWoman.