Are we the Last Fort? Reflections on the first Convoy Camp Site in Australia’s National Capital. 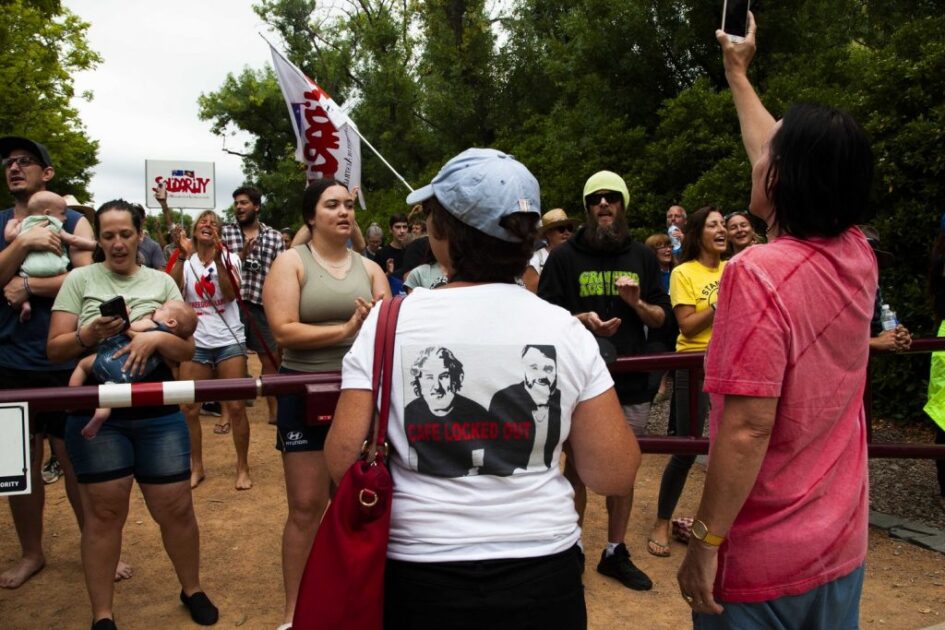 Day three was a cooler day, but only weather wise. Every hour the police entered the camp and did a walk through. All of them masked up and initially polite, they passed through the growing camp, surrounded by protesters, who were trying to convince the officers to come over to our side.

These were angry people. People who had driven here from all over the land in a search from simple things. The right to work, the right to socialize, the right to choose what went into their bodies.

It was initially agreed upon that these walk throughs would happen every hour, but since there was no designated leader, in the camp there was several schools of thought regarding this. Some wanted the police to stay out, others wanted them to be allowed to do their walk through only twice a day, while others, who felt we had nothing to hide, and need to find a way to convince to police to join us,  were happy for them to wander through.

Matt Lawson, the Melbourne man who was shot in the stomach, at close range by a rubber was filmed having a calm yet persuasive conversation with a policeman. A young policeman who admitted that he agreed with all of Matt’s points which covered everything from the erosion of freedoms to questionable the efficacy of the vaccines.

But one sympathetic young cop wouldn’t be enough to stop the escalation of tension.

Within an hour the police had change their tactics. Now they not only wanted to walk though, when they wanted to, but they begun to block the main entrance and whilst they let our cars out, they were not letting these people back in. They also began telling us that we were illegally camping, or trespassing. But legally this wasn’t a police issue, this was a council issue, not that anyone from the council had come here yet.

But as the tension continued to rise near the main entrance, where more and more police were arriving, the rear of the camp was open.

I went there with a few others to wait. It didn’t take long. Suddenly, four unmarked, four wheel drives with darkened glass, pulled up in a line and with their engines running, they sat in a line like a modern day cavalry charge waiting for their order to order to charge.

I live streamed this, and with my good friend, the photographer Daniel, a Mauri in his late sixties, we sat on the grass before them. Soon other freedom seekers, for the word fighters is wrong, sat next to us.

We believed that despite the clear intimidation that they wouldn’t run us over. This was Australia.

We followed these men.

By the time we reached the centre of the camp it was all a mess.

The police were kettling themselves, as their colleagues were arresting someone, and the freedom seekers were surrounding these officers, our hands in the air, to show the world that we were unarmed, and all of us were chanting, “You serve us, You serve us.”

The rest was a shit-fest. You could argue that police were trying to do their job, but you could argue too that someone up high had told them to enter the camp and use a show of force to frighten us off.

But instead of spreading fear, these officers were met by old people who had come here, from all over the country because they were over the fear. One of these was a 73 year old man, called Les, who was pepper sprayed.

And this, for our side, was a victory, for all of us had our phones out and were live streaming everything. And whilst people at home would try to find a way to exonerate the tactics of the police,  the visuals of how these police officers were treating us, officers who should be our heroes, brutalizing our  old would speak not only a new truth, but a shameful truth.

One man hugged me because I was crying. He was crying too. Lots of people were. And not from the pepper spray or the fear. But from disbelief that these police officers, who should be our heroes, where now our oppressors.

They were here to try move us on because their masters knew lots more people were coming. Lots more. And they wanted the head of the forming snake cut off.

These officers weren’t protecting the public, they were, instead being used by the politicians to try and crush what we were.

And over these few days, many of these officers have told us they are on our side, although that is hard to see that sometimes.

And their masters should be scared, for what we are is the counterbalance. These officers are doing this for a pay packet, while we have nothing to lose, becuase apart from our souls, it has all been taken away.

I have been saying for a while, that we all been surfing an incoming wave of tyranny, well what we are now is the first rise of another wave, a growing tsunami of people, Australian’s wanting what people all over the world crave, freedom.

Even as I write this, people are coming up to me and introducing themselves. They have come from everywhere. Two women who just arrived had driven down from Townsville. Two days of solid driving.

This park is the line in the sand. You can feel it. We all can.

Will we be the agents of change? Will our wave wash away their tyranny? Or will we be the last stand of everything that was beloved about our country? A fort crushed by officers trying to pay their mortgages; officers who, if that happens, will have to try live in a house built upon, and haunted by our ghosts.