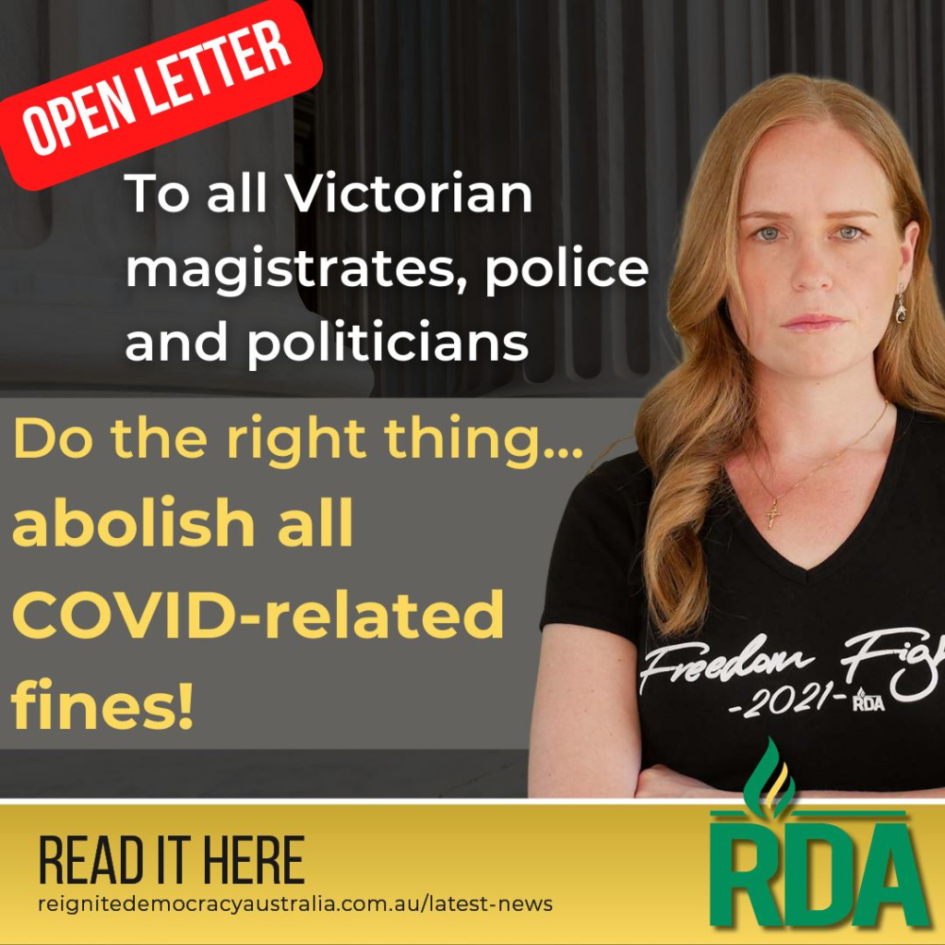 My name is Monica Smit, I’m 34 years old, born and bred in this beautiful country. I was brought up to respect authority, pay my taxes and be kind to my neighbour. I have never been in trouble with the law before…until COVID. All of the sudden, I was branded a criminal or even an enemy of the state. Over the last 2 years, I have been in and out of court justifying why I care so deeply about human rights.

When the lockdowns began, I disagreed with the heavy-handed approach that the Victorian Government took. I saw that my fellow Victorians were suffering and had no outlet for their frustration, so I started an activist organisation called Reignite Democracy Australia (RDA). I didn’t mean to create such a stir…I was just doing what I thought was right.

RDA grew very quickly, which proved there was a need for an organisation like this to exist. We helped followers file petitions, email their members of parliament, connected people who were feeling alone, and even suicidal. We offered an outlet for people’s confusion and anger.

Helping people is very rewarding. However, I have been publicly vilified, arrested several times, put into solitary confinement in a maximum-security prison for 22 days, had my house raided, my family torn apart, and my personal life will never be the same.

Why did that happen to me? Was it because I stood up for something I believed in? Even if you disagree with me, is it a crime that I gave support to people who were suffering and tried to give them a voice?

I still have four covid related fines, I’ve been in and out of court for two years. Before COVID, I had never been in trouble with the law.

Enough is enough. There are thousands of people like me still going through the court systems right now for simply leaving their house, or exercising for too long. This is an embarrassment, especially for the legal system.

How have so many honourable public servants fallen into a trap of blaming the everyday Aussie instead of the person giving the orders?

I KNOW most of you are better than this! I know your families have suffered too; I know you want to start mending the divide with us. So do it! Let’s start forgiving each other, ignoring bad orders and just do the right thing.

A famous economist once said: “When the facts change, I change my mind. What do you do, sir?” It is time for Australia’s justice system to change its mind. The COVID fines that thousands, including myself, are fighting in the courts need to be canceled immediately. The basis on which they were levied, the alleged facts in evidence, have been revealed as false. If our courts are to have any respect for the truth, then the time has come for a change of direction.

These fines are a travesty for two reasons. They robbed people of their basic rights, including the freedom of movement and the right to speak freely. And the extreme measures were justified by allegedly factual claims that have now been exposed as wrong. On both counts, it is time that the authorities, and not the people being accused, take responsibility for their egregious errors.

I will never pay the fines, and I will never justify it again because it is not my moral obligation to do so. It is the obligation of the courts, the legislators, and public servants to serve the public by withdrawing these appalling court actions.

Our social fabric has been deeply harmed by these legally extreme and aggressive acts – a society also inhabited by people in the judiciary, government and the public service – and it is time to start returning to something like the decency that Australia once prized. In the final analysis, we are necessarily in this together, and persisting down the path of bureaucratic savagery and incompetence will only deepen the problems.

The facts are becoming clearer and clearer, and it is not good. Fault Lines, an independent review funded by three major philanthropic organisations, and headed by former senior public servant Peter Shergold, has started to uncover the extent of the errors and malfeasance, although it only scratches the surface. The review consulted some 200 health experts, public servants, epidemiologists, unions, community groups, businesses, and economists, receiving more than 160 submissions.

It points to “too many instances in which government regulations and their enforcement went beyond what was required to control the spread of the virus, even when based on the information available at the time.” It especially criticises the closure of the schools, which led to mental health problems, especially with children. The report draws some obvious conclusions. The lockdowns were wrong and inhumane. School closures were wrong and cruel. Border closures were wrong and, especially when it affected sick or dying loved ones, utterly appalling, and poor people were hurt the most.

We had many discussions over two years ago with politicians and police and bureaucrats warning of this – and it has happened exactly as we said. So who is guilty of wrongdoing here? Why are people being fined for speaking out against lockdowns when it is now clear they were over-the-top and didn’t work at all?

Other facts that are emerging are even more damning. The reason given for the lockdowns, travel restrictions, forcing mask wearing, and locking out the unvaccinated was that the virus was a 1 in 100-year event that required the suspension of normal life, including incurring massive economic damage.

For this to be a justified position, there needed to be some evidence that it was true. The opposite is the case. According to the Australian Bureau of Statistics – which used the best primary source, death certificates – Covid-19 ranked as the 34th cause of death in 2021 when the pandemic was supposedly at its height. The ABS has also found that the average age of death was identical to life expectancy in Australia and that the COVID deaths recorded so far over a two-year period are at the same level as flu deaths in previous years. Does this support such aggressive measures, including having tanks in the streets? I think the answer is self-evident.

The evidence does not support what was done. When those responsible for applying the law do so in a way that is lawless, then the basic foundations of society begin to fracture.

What we have been fighting for is what is now being acknowledged. We have been talking about it for two and a half years yet now is it being seen as a grand revelation.

It is not overstating the case to say that the way lawmakers have behaved has deeply harmed our precious democracy. It would be bad enough to take away our rights if some of the alleged facts claimed were correct, but they are not.

When the courts and the authorities are in the wrong, they should have the courage to admit they were wrong and correct their errors. It is to be hoped that there are some people left in positions of power who have the maturity to change course.

I implore you to do the right thing. Abolish all covid fines, refund those that were paid and let’s start mending the divide and recovering for the division that was sewn. We are all Australians. We just want to live in peace and protect our loved ones, but before we can do that, we must start mending the divide so we can live as a community again.

There is an addendum to this story.

Shortly after publishing her open letter, the Victorian government dropped all charges against her.

She wrote: On October 31st, 2020, I was arrested THREE times in one day, put in the back of a police van for 45 mins, and fined thousands of dollars just for leaving my house.

After more than two years of fighting these embarrassing fines, the prosecutors dropped the charges with NO explanation.

I was prepared and wanted a chance to set the record straight but they never give us the opportunity! They don’t want their actions being questioned in open court. They try to intimidate you and when they realise you aren’t backing down, they drop the charges.

I was charged with incitement last year, I fought them and the same thing happened, they dropped the charges.

Not everyone has the endurance or means to fight back and end up being forced to plead guilty against their will. I hope this shows you some proof that fighting back sometimes works.

Whether you are a supporter, simply curious, or following Monica Smit’s work out of a sociological interest, there is no doubt we are in a unique and highly dramatic period of Australian history, and that Reignite Democracy Australia are an integral part of that realignment. You can follow the work of RDA at their Telegraph Channel by clicking on the icon below.

RELATED STORIES IN A SENSE OF PLACE MAGAZINE