The Abuse of Australian Servicemen, Politicians Sacrificing Their Own People, Scientists treating the Population as Lab Rats 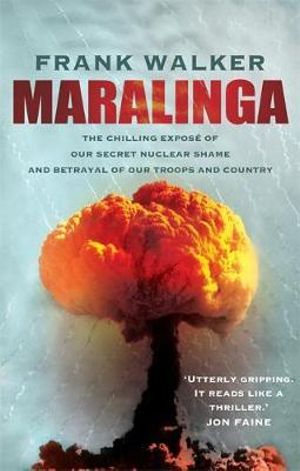 If the current ABC TV drama series Operation Buffalo piqued your interest in the British atomic tests in the South Australian desert in the 1950s and 60s, Frank Walker’s book ‘Maralinga’ reveals the true horror of what happened.

Praised as “reads like a thriller”, “makes your hair stand on end” and “reaches out and grabs you be the throat”, Walker uses his skill acquired in 40 years as journalist and foreign correspondent to tell the shocking full story of what really happened at Maralinga….

+Soldiers, airmen and sailors used as human guinea pigs to test the effects of radiation

+Experiments done on the bodies of babies, toddlers and young children to see what effect fallout had on them.

+Young soldiers ordered into radioactive hot zones straight after the nuclear explosions to see if they survived.

+Radioactive clouds drifting over towns and cities after the explosions.

+Government coverups to hide the lasting impact of the tests.

Here is an extract from the book ‘Maralinga’ of what happened when RAAF pilots and crews were ordered to fly right inside the mushroom cloud of the first atom bomb exploded in the Australian desert. The account was told to Walker by surviving crew member Ed Cheney.

On 15 October 1953 the dawn sun crept over the horizon in central Australia, sending the sand a bright golden red. The crew of a waiting RAAF Lincoln bomber were assembled in the briefing room at the high security Woomera airfield. The skipper, Group Captain Maurie Onions, led a crack seven-man team. Sergeant Edward Cheney was the youngest in the plane’s crew, having joined the air force aged just seventeen. Aged just twenty he was an experienced navigator. Along with the rest of the crew Cheney put up his hand when the RAAF asked for volunteers for a ‘special mission’.

“They made a big show of having us sign the Official Secrets Act before they’d tell us where we were going. They said we were going to Woomera so I thought it had to be working with some sort of secret weapon.”

After three months of training they were told they were to be used in surveillance for the atom bomb tests.

“We thought that would be interesting, flying around watching an atom bomb go off.”

Before they took off on the day of the test the crew were thanked by top military brass. A British Air Vice Marshal said nonchalantly: “By the way, we don’t know everything that is going to happen. It’s a mystery what’s goes inside an atom bomb’s mushroom cloud. However, there is one thing we are concerned about and that is it might affect your sterility. If you want to pull out of the mission it is all right to do so. Well, good luck.”

The crew remained silent. They had little time to consider the offer to pull out of the mission. They were immediately whizzed out to their waiting Lincoln bomber. They had no protective coverings, just regular flying gear. Cheney saw empty fruit cans screwed on the plane’s sides, wings and tail. The crew didn’t know what they were for. They flew around the site for hours and were about twenty miles from the blast zone and heading away from it when they heard the countdown over the radio.

“There was this incredible white flash, and then the shock wave hit us. It nearly tore the plane apart. The plane shook violently as though we were in a thunderstorm. I heard through the radio the base tell the skipper: ‘Turn and enter’.

“Onions turned the plane around and from my position in the canopy at the very front of the plane I saw this huge boiling mass of grey and brown crap shooting up into the air.”

Cheny’s task was to take photos with a special aerial reconnaissance camera scientists had installed in the plane. As they approached the massive column beneath the boiling mushroom cloud Cheney called out “Cameras on” and the cameras proceeded to shoot – one directed straight down, one to the left and one to the right.

“I didn’t see any flame in the mushroom cloud. It was this boiling mass of rising cloud of dirt and muck. We were at 20,000 feet, and flew straight towards this rising column. It took just 30 seconds of flying to reach it. We hit it just under the mushroom cloud in the column that was still rising. It was like flying into a tornado. I had flown into storm clouds before to collect temperatures so I thought I knew what was coming. But this was something else. It was like flying into the gates of hell.

“We had the controllers in our ears all the time and the skipper was describing what he saw and what the plane was doing. We were an Australian air force plane operating under British command in Australia. These were British voices telling us to fly into the mushroom cloud column. At that moment I realised we were being used as guinea pigs.

“This was a boiling cloud of dust and crap. It was incredibly dangerous. Immediately we entered the cloud everything went black. At our speed it took just seconds and we were through to the other side. I was very relieved. Then this Pommy voice comes over the radio: “About turn and reenter.”

“We looked at each other. ‘What the bloody hell? We just did that’. The skipper asked them to repeat the instruction. They did and the skipper turned the plane around and we went back into it. Again we felt the heat inside the boiling column. We were only in it for seconds and the air in the plane heated very quickly. We went through it and flew at full speed back to Woomera.”

When they landed at Woomera they were ordered to park the plane at the furthest point on the tarmac. Men in full white protective clothing with breathing gear drove up, pulling trailers. The plane’s crew stood around in their standard flying outfits watching as the scientists offloaded science gear from the plane and the strange cans attached to the fuselage. They used long poles to lower them into lead containers and sealed them.

“Nobody wanted to go near us. They loaded the trailers with the lead boxes and drove them straight to a waiting silver British V Bomber. It loaded up and immediately took off direct for England.”

Cheney and the crew stood around for almost two hours before they were taken to a decontamination area where their clothing was taken away and they were sprayed with a high pressure hose, ordered to scrub every inch and crevice of their bodies.

“They ran Geiger counters over us and if they beeped they told us to scrub and shower again. All this scrubbing and the sight of the Pommy scientists in protective gear made me think. We were up in the air for eight hours. Whenever you do long flights you take a big thermos of hot coffee and boxes full of sandwiches. We were eating and drinking stuff that had gone through the nuclear cloud.

“Oh shit! We were the lab rats for their test!”

Cheney’s mission with the nuclear cloud wasn’t over. His crew were ordered to follow the radioactive cloud as it drifted east across Australia.

“In daylight it had this red colour. The only way to determine where it started and ended was to fly towards it until the Geiger counters went off. We flew straight into it and when the Geiger counters stopped clicking we knew we had come out the other side. I reckon we flew through that cloud forty to fifty times as we followed it across the country, over towns and cities, before it drifted out to sea.”