‘This Black Smoke rolling through the Mulga’: almost 70 years on, it’s time to remember the Atomic Tests at Emu Field 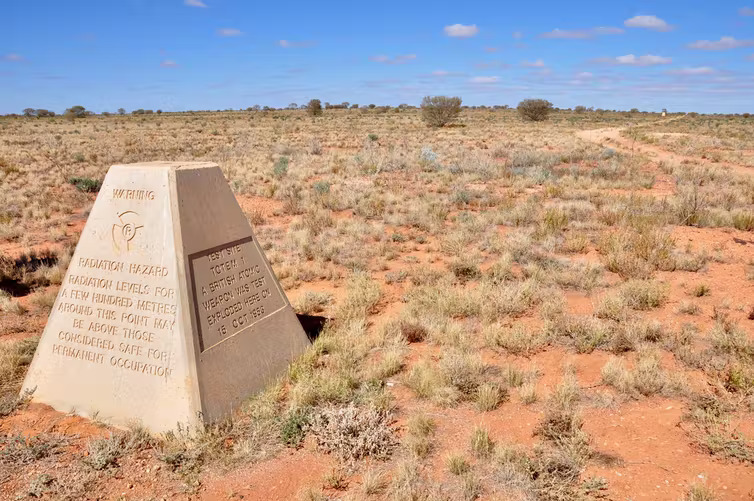 The name Emu Field does not have the same resonance as Maralinga in Australian history. It is usually a footnote to the much larger atomic test site in South Australia. However, the weapons testing that took place in October 1953 at Emu Field, part of SA’s Woomera Prohibited Area, was at least as damaging as what came three years later at Maralinga.

The Emu Field tests, known as Operation Totem, were an uncontrolled experiment on human populations unleashing a particularly mysterious and dangerous phenomenon – known as “black mist” – which is still being debated.

Operation Totem involved two “mushroom cloud” tests, held 12 days apart, which sought to compare the differences in performance between varying proportions of isotopes of plutonium. The tests were not safe, despite assurances given at the time.

Between 1952 and 1957, Britain used three Australian sites to test 12 “mushroom cloud” bombs: the uninhabited Monte Bello Islands off the Western Australian coast and the two South Australian sites. (An associated program of tests of various weapons components and safety measures continued at Maralinga until 1963.)

The British government, with loyal but uncomprehending support from Australia under Liberal prime minister Robert Menzies, proceeded despite incomplete knowledge of atomic weapons effects or the sites’ meteorological and geographical conditions.

Emu Field was chosen because of its straight, flat claypan. This natural feature drew the attention of the larrikin surveyor of outback Australia, Len Beadell, who had been charged by the Australian Department of Supply with finding a suitable site for atomic weapons tests.

Beadell ascertained that aircraft could land on the claypan, essential for a terrestrial atomic test site. What he didn’t take into account was that this claypan was in the middle of Aṉangu lands. Aboriginal people lived all around it, on stations and settlements.

The first British atomic test, Operation Hurricane, held in 1952, was a maritime test of a 25 kiloton atomic device detonated below the waterline in a ship anchored off part of the Monte Bello Islands.

Operation Totem was designed to test two much smaller devices – 9.1 and 7.1 kilotons respectively – by detonating them on steel towers in the desert.

At the time, Britain was in the process of commissioning a new reactor at Calder Hall in Cumbria (designed to make plutonium for both military and civilian uses) that would produce nuclear fuel containing more plutonium-240 than a previous reactor.

Totem was intended to test “austerity” weapons made from nuclear fuel eked out of this reactor. (Plutonium-240 can potentially make nuclear weapons unstable, in contrast to the fuel of choice for fission weapons, plutonium-239, which is more controllable.)

Totem was a “comparative” test. Its innermost technicalities are still kept secret by the British government.

The two tests at Emu Field were fired at 7am, on 15 October and 27 October.

The first test, Totem I, produced a mysterious, greasy “black mist” that rolled over Aboriginal communities around Wallatinna and Mintabie, 170 kilometres to the northeast of Emu Field. The black mist directly harmed Aṉangu people. Because no data was collected at the time, it is impossible to quantify precisely, however, the anecdotal evidence suggests death and sickness occured.

The British meteorologist, Ray Acaster, gave an account of the phenomenon, and its possible causes, in 2002:

The black mist was an horrific experience for all in its path. Survivors gathered at Wallatinna and Marla Bore in 1985 testified to the Royal Commission into the British Atomic Tests in Australia on its effect on individuals and communities.

Among those who testified was Lallie Lennon, who lived at Mintabie with her husband and children in 1953. After breakfast on 15 October they heard a deep rumble, followed by weird smoke that smelt of gunpowder and stuck to the trees. Lallie, her children and the others with her all got sick with diarrhoea, flu-like symptoms, rashes and sore eyes. Lallie’s skin problems were so severe, it looked like she had rolled in fire.

Another witness, the later tireless advocate for the survivors of the British atomic tests, Yami Lester, was a child at the time of Totem and lost his vision after the tests.

He recalled his experiences in testimony to the royal commission, and elsewhere. Interviewed by two London Observer journalists in a story republished in the Bulletin under the title “Forgotten victims of the ‘rolling black mist’”, he said:

I looked up south and saw this black smoke rolling through the mulga. It just came at us through the trees like a big, black mist. The old people started shouting ‘It’s a mamu’ (an evil spirit) … they dug holes in the sand dune and said ‘Get in here, you kids’. We got in and it rolled over and around us and went away.

The second test, Totem II, took place on October 27 in completely different meteorological conditions and did not produce a black mist. Its cloud rose quickly into the atmosphere and broke up soon after. However, radioactivity from both Totem I and Totem II travelled east across the continent, crossing the coast near Townsville.

Air force crews from both Britain and Australia flew into the atomic clouds. A British Canberra aircraft with three crew aboard entered the Totem I cloud just six minutes after detonation, far earlier than any of the other cloud sampling aircraft.

For a brief period the radioactivity to which they were exposed was off the scale. The aircraft was flown back to the UK, where it was found to carry extensive residual radioactive dust despite having been cleaned in Australia.

While air crew were exposed to contamination in flight, RAAF ground crew were worse affected, since they were largely unprotected and worked for hours on the contaminated planes. The risk to both air and ground crew was extensively examined by the Royal Commission.

One account by Group Captain David Colquhoun, head of RAAF operations at Emu Field, mentioned a gathering of crew in a hangar at Woomera, where a doctor ran a Geiger counter over those present.

As it reached the hip of one man, “the Geiger gave a very strong number of counts”. The young man then said he had a rag in his hip pocket he had used to wipe grease “off the union between the wing and the fuselage”. This rag was heavily contaminated.

After America’s McMahon Act of 1946 made it illegal for the US to work with other countries on atomic weaponry, a secret British Cabinet committee made the decision to conduct tests of a British bomb – but not on its own territory.

Britain explicitly abrogated all responsibility for those who lived near the Emu Fields site. Britain maintained through to the royal commission – and in years beyond – that it was not responsible for Aboriginal welfare in the face of atomic weapons tests.

The extent of the huge British atomic weapons testing program here is still largely unknown by Australians. The Australian government forced the British government to contribute to the cost of remediation of Maralinga in the mid-1990s, although Monte Bello and Emu Field were largely left untouched.

The story of Emu Field has been forgotten for nearly 70 years. Bringing it back into our national consciousness reminds us the costs of harmful political decisions are often not borne by the decision-makers but by the most powerless.

The author would like to thank Maralinga Tjarutja Council for allowing access to the Maralinga lands, including Emu Field.

The Secret of Emu Field: Britain’s forgotten atomic tests in Australia, by Elizabeth Tynan, has just been published by NewSouth