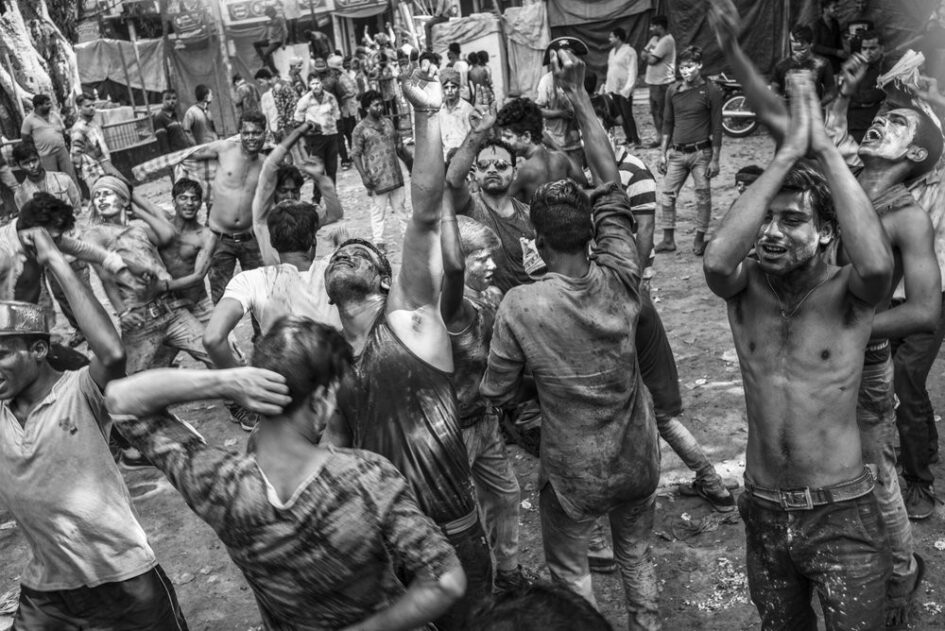 The Black and White Photography of Russell Shakespeare

India’s Holi Festival celebrates the triumph of good over evil.

It lasts for a night and a day and erupts in vivid display of colours across the villages, towns and cities of India, spreading into Nepal. At its core, people throw brightly colored powder over each other in a violent eruption of delight in the physical world.

Award winning Australian photographer Russell Shakespeare has been obsessed with India since first travelling there as a young man in the 1980s.

Love and redemption, forgiveness, the end of winter and the beginning of spring.

Holi gets its name as the Festival of Colors from Lord Krishna, a reincarnation of Lord Vishnu.

He is said to have had a penchant for playing pranks on village girls by drenching them in water and colors.

Shakespeare reports: The first Holi Festival I ever saw, I was blown away. I had never seen this side of India.

My first Holi Festival was in Varanasi, where people across India go to die because in Hindu mythology it is a place where you can escape the cycle of reincarnation, and therefore of suffering.

An Indian at the time told me that the night before it starts is known as the Night of Abuse. You can say anything you like about a politician or a friend, which is a liberation in a society as ceremonially polite as India.

The idea appealed to me enormously.

That first night of Holi there are bonfires everywhere.

The accompanying religious rituals, including prayers, destroy any evil inside you.

The fires represent the triumph of good over evil.

Across India, each little town has its village poets and musicians who celebrate in the main squares. It varies across the country, but they can make up poems about the local politicians or corruption, they get it all out. And they won’t get into trouble for saying things they would never say at any other time.

The Streets Have No Shame

Most of the people who are participating in the Holi Festival on the streets are incredibly intoxicated, which I found amazing because you almost never see alcohol in India.

The revelers also consume bhang, which is an edible form of marijuana often mixed in with drinks.

The extreme level of public drunkenness goes on for the whole of the Festival.

For a society which doesn’t normally drink, there are a lot of people on the streets who are out of control.

The other interesting thing to note is that there are almost no women on the streets — except perhaps the odd crazy foreign woman.

There are signs warning women not to go out.

On the streets there are drunken males in large crowds.

Most Indians have no tolerance to alcohol because they hardly ever drink.

To find an Indian who is an alcoholic is extremely unusual because alcohol is just not readily available and carries a lot of stigma with it.

But on the Festival of Holi, all is let loose.

In a society which reveres the status of women, mothers and daughters, on this one night the streets are definitely not safe.

No colors are thrown on the first night.

The Festival is basically divided into two parts.

The first night is one of bonfires and extreme levels of intoxication.

The drunkenness continues into the second day, which is when the colored powders are thrown.

It can be like looking at one big dance party.

In certain parts of the city there are big speakers and a DJ running events. The music is very loud, rhythmic, hypnotic, and everybody is dancing into a frenzy.

It is a kind of abandonment.

Most of these people are fairly poor. They don’t live luxurious lives. This is a rare celebration.

The Holi Festival celebrated at home is a very different festival.

People gently put colour on other family members, and the colored paste is applied with reverence, love and respect.

It is a beautiful ceremony.

The Holi Festival on the streets is like mayhem on another level. You will never see the streets of India like that from one year to the next.

Perhaps that is why I keep going back. I love that madness.

Because I had been in Varanasi so often, I recognized many of the local characters, even during Holi.

This is a picture of a rickshaw driver I knew well. He is normally a quiet family man, working hard for his children. Here he is acting crazy, the most conservative looking person in the city is tearing up the dance floor. And everyone is giving him room. He is the king.

This is the thing I love about Holi more than anything.

It is the one time of the year when everyone lets go.

It is that one day the caste system is not there, when everybody is equal.

Everyone is in there, from super rich to super poor, and they are just enjoying themselves with a kind of wanton abandonment, which for such a crowded but ordered society is in itself incredible.

The Leper: A Disease of Poverty

I noticed this person because they were very brightly colored, and his face looked like a human skull, the skin was drawn so tight.

I immediately went over to where this guy was dancing. It was an amazing scene.

Suddenly I noticed his hands, and realized he was a leper.

My only experience of lepers was of them them begging in the street, totally downcast.

The lepers of India are extremely poignant. Leprosy is known as a Disease of Poverty. It afflicts the very poor.

It is an extremely disfiguring disease, and most people are frightened of those who have it. Either that, or of the flood of sorrow you feel when you see them.

They have a kind of existential sadness well beyond your average beggar, because there really is no hope. Their flesh really will rot off them. They will not live into old age.

And here was this leper, who would normally be shunned by society, dancing in the crowd.

Holi Festival celebrated at the Burning Ghats of Varanasi is something else altogether.

Instead of throwing colored powders over each other, the crowds throw white or grey ash, human remains leftover from the cremation sites.

Everybody is covered, including myself, in this white dust. It almost looks like a bomb as gone off in a flour factory. Everyone is covered in this grey white.

And then you realise it is actually ash from your fellow human beings.

This stuff coating your skin used to be somebody.

That, as you can imagine, completely blew my mind.

We’re not just talking ordinary colors, they are extremely vivid.

In the past the powders were made of turmeric and flower extracts. Today it is mostly synthetic and so the tints can be even brighter.

There are four main colors, red, blue, yellow and green. And they are thrown with complete abandon.

The colors stain the streets and everyone in them.

Lots of other things are also thrown, cow dung, oil in plastic bags, so you have to be so aware, particularly when you are photographing, that you are not going to end up with some little street kid throwing oil at you.

They all think it is a great joke.

Especially to hit a foreigner, that really makes their day. They think that’s the funniest thing they’ve ever seen.

But if my camera is drenched in oil, it certainly doesn’t make mine!!

As a photographer you almost prepare for Holi as if you are going into battle.

The first thing I do is coat my skin in mustard oil, which puts a layering over your skin.

The oil means that you can clean yourself up easier afterwards, without all the paints soaking into your skin.

The night before I also go through the process of wrapping my camera in a plastic bag, as a precaution against water and paint.

I always wear safety glasses and ear plugs. One particular festival, I had a guy come up with a handful of something all over my face and glasses and into my ears.

Because I had so much protective gear, I didn’t get anything in my eyes or ears.

After my first Holi Festival, I always go with another photographer.

You need to watch each other’s back, partly because you are dealing with such an intoxicated crowd. I have seen people have their clothes entirely ripped off.

Nobody’s paying for these things. I am not on a news assignment.

For this sort of work I find color too distracting.

It is trying to get those emotive moments which are real and true, that is what I am looking for.

Color is very seductive. But black and white keeps it raw.

This piece is written and compiled by John Stapleton, editor of A Sense of Place Magazine. He first made money out of writing when he co-won a short story writing competition in 1974. He worked as a staff reporter for The Sydney Morning Herald and The Australian for more than 20 years. A collection of his journalism is being constructed here.