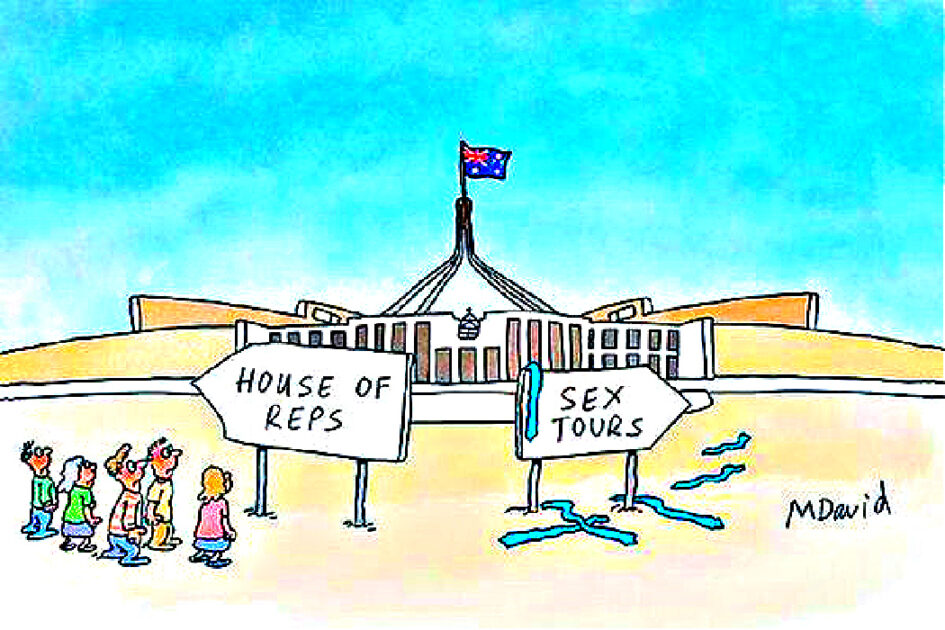 The rancidness of our Liberal Party Government, with its recent sex scandals and accusations of rape, starts from the very top and seeps down.

DO YOU REMEMBER a couple of weeks ago when one of the Government’s favoured accredited stenographers Phil Coorey described Twitter as Australia’s political sewer and his pal Chris Uhlmann took great delight in calling people like us ‘sewer rats’?

Well, you won’t be surprised to know that both of these fine and well-credentialed apologists are not really all that good at political geography.

As it turns out, what we’ve learned over the past few months is that the real political sewer runs deep and wide through the corridors of power.

The waste treatment plant of this system of pipes, tunnels and odure-filled trenches is actually situated on a hilltop inside the Parliamentary Circle. It is the political heart toilet cubicle of our nation’s capital.

Over recent weeks, we’ve all seen how totally dysfunctional this poo-processing facility is. Some of us – in fact, many of us – have been saying for some time that the Morrison Government stinks but now nobody can deny the rising stench emanating from the grease traps of Canberra.

You don’t need me to tell you about all of the scandals, the corruption, the self-serving, insider trading, treachery and dirty double-dealing. IA has been covering it for ages, but let’s just recap some of the highlights.

Reefgate. Angus Taylor. Barnaby Joyce. Michaelia Cash. Sports rorts. Peter Dutton. Christian Porter. Of course, this is not an exhaustive list of the scandals. Forgive me if I missed your favourite.

All of this was common knowledge well before Louise Milligan pricked the Canberra Bubble on Four Corners back in November 2020.

Since then, we’ve learned of the severely problematic, brutal and deeply misogynist frat-boy culture inside Parliament House and heard allegations of rape, assault, sex workers smuggled into MPs offices and debauched “solo sex acts” by a cabal of depraved and privileged young men who think they are born to rule the world via their big swinging dicks.

We, the voters of Australia, are entitled to ask: “What the actual fark is going on?”

Well, I haven’t said much about Federal politics for a while. I was finishing a book and obsessed with the American Election right up until Joe Biden was safely inaugurated at the end of January.

I have been watching closely though and I have a theory. I suggest you refrain from eating while you read the rest of this piece; I don’t want to be responsible for causing you to gag on your cereal or spit back into your coffee mug.

If my analogy holds true – that the corridors of power are the national political sewer – then what role does the Prime Minister play in this toxic ecosystem?

It’s simple: Scott Morrison is the fatberg blocking the drain.

A fatberg is a giant mass of sludge that solidifies inside the sewer system. It’s mostly composed of grease and dirty cooking oil tipped down kitchen sinks, but they can grow to an enormous size and their contents provide a remarkable insight into the daily habits of everybody who contributes to its mass. The biggest fatbergs can weigh upwards of 100 tonnes and grow to around 80 metres in length.

According to The New York Times, a fatberg forming under the city of London was analysed by scientists a couple of years ago and they found it contained traces of narcotics, condoms, wet wipes and incontinence pads.

I’m sure a chemical analysis of the Morrison fatberg would reveal similar results.

The major problem with fatbergs is that they clog up a system that’s designed to drain away all the nasties for treatment and recycling. When properly cleaned and decontaminated, wastewater can be safely re-consumed by humans.

There’s not much chance of that happening in Canberra.

When a fatberg blocks the natural drainage system of sewer pipes it backs up and contaminates the whole site. The Romans invented urban sanitation and called their first sewer system the Cloaca Maxima. Do you think that if Morrison was a Caesar, perhaps he’d choose this as his moniker?

Compared to modern standards, the Roman cloaca was pretty inadequate. It stank and it didn’t really do much for public health or reduce the number of parasites feeding in the putrid waste.

I’m sure all of this sounds familiar.

The Morrison fatberg has pretty much the same effect. All of the waste and its parasites back up right through the corridors of power. The fatberg makes it impossible for them to be drained away.

The results are on display now.

The overcompensated and overrated cohort of parasitic man-acting boy staffers who teem and squirm in the slime follow their leaders, looking to them for examples of how to behave.

When senior ministers are rewarded for loyalty to the fatberg, rather than exemplary performance of their duties, the parasites learn to mimic their behaviour.

When senior male members of the Government indulge in ostentatious, publicly promiscuous sexual charades and treat their female colleagues as disposable sex toys, the parasites feel emboldened to act the same way.

A fatberg attracts the most unsavoury and unflushable lumps of muck to itself. It feeds on the discarded evidence of gluttony and infamy.

A fatberg sees the world as fodder to feed its putrid appetites. This is what Morrison has done this week.

Morrison has this same transactional tunnel vision as a parasite-ridden fatberg. His outburst on Monday accusing some Sky News journalists of the vile behaviours he has tacitly condoned among the parasites shows how gluttonous the Prime Minister is.

In April last year, a fatberg was pulled out of the sewers under Melbourne’s streets. It was longer than a petrol tanker according to news reports (though no mention of how many Olympic-sized swimming pools it would fill, unfortunately).

The Melbourne fatberg weighed 42 tonnes (a small one by global standards) but it still took nine hours and a couple of giant cranes to remove.

The Morrison fatberg is at least that big, though my guess it’s at least twice the size of the Melbourne giant.

Morrison is wedged into a narrow pipe, deep inside the system and it will take a plumber’s friend of enormous size and power to shift him.

Until then, the backed-up drains on Capital Hill will continue to throw up more toxic sludge and feed the parasites.

The Romans were apparently wary of connecting their domestic sewer pipes to the Cloaca Maxima because they were afraid of what might crawl out of it to literally bite them on the bum.

The sewers of Rome were also notorious for the emissions of toxic and flammable mephitic gases that were oxygen-depleted but rich in nitrogen. Now we know what it is that keeps the Canberra Bubble inflated.

Dr Martin Hirst is an Independent Australia columnist, a journalist, author and academic. You can follow him on Twitter @ethicalmartini.