Calls for Justice as the System Fails Mhelody Bruno: An Interview With Artist Bhenji Ra 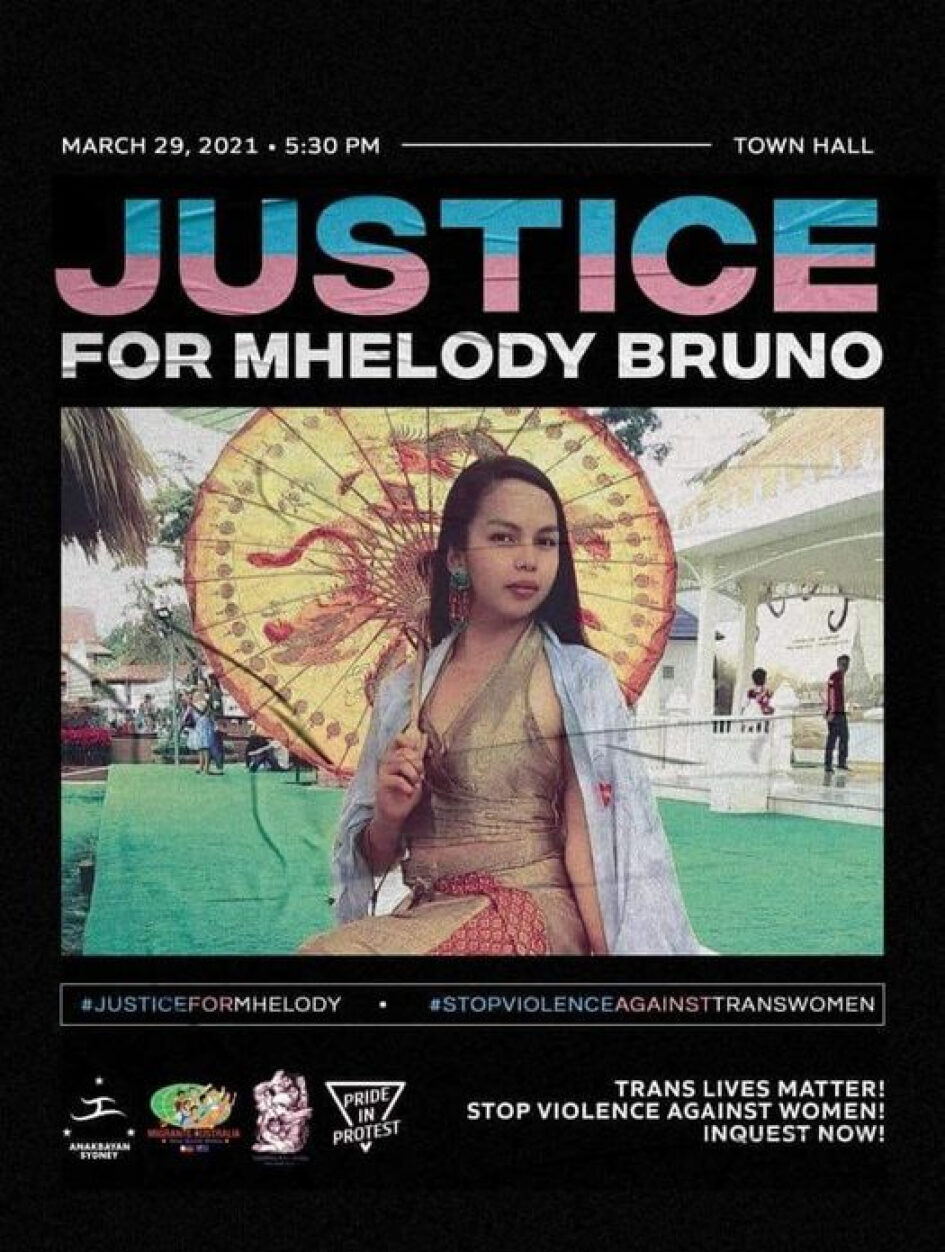 The 20th November is Trans Remembrance Day. And on this date last year, it was announced that 350 trans and gender diverse people had been killed globally over the course of the 12 months prior.

Not only are transgender people subjected to high levels of violence, but, due to widespread prejudice, these deaths don’t often receive the justice they would otherwise warrant.

Toyer, now 33, had met Mhelody over Grindr, and the pair had been in a relationship for about three weeks, when he choked her until she became unconscious in his Wagga Wagga apartment on the morning of 21 September 2019.

In handing down his sentence, Lerve said he was “satisfied on balance” that Mhelody “not only consented to the act of choking but actually instigated it” the first time it happened.

The judicial officer added that “although there was no discussion as to the boundaries, there was an understanding the deceased would tap the offender’s arm if she was distressed or wanted him to stop the choking.”

Mhelody’s family live in the province of Surigao del Surin in the Philippines. On hearing of the sentencing outcome, her parents said they “cannot accept the decision” and they “want genuine justice” as “it cannot be just like this”.

At the time her life was taken, Ms Bruno had been holidaying in Australia for two months. She was set to return to the Philippines a week after Toyer killed her.

Mhelody worked in a Manila call centre and she financially supported her family via this work.

In another sign of how the Australian criminal justice system has failed this visitor to our country, Migrante NSW spokesperson Lina Cabaero pointed out just after her death that NSW police initially named its investigation Taskforce Lamson, which is a slang term for an aspect of a sexual act.

And this is even more so, when it comes to trans women of colour.

A travesty of justice

On Monday, it was announced that the case has been listed to be reopened for resentencing on 29 March, as the judge got it wrong.

The NSW Director of Public Prosecutions has explained that an ICO cannot be imposed in relation to a manslaughter conviction.

In response to this injustice, Filipino youth group Anakbayan Sydney and Filipino migrant organisation Migrante NSW organised a Justice for Mhelody Rally at Sydney Town Hall. It was supported by Pride in Protest.

Sydney-based artist Bhenji Ra has been campaigning for justice for Mhelody since her untimely death. Sydney Criminal Lawyer spoke to her about the shock the initial sentence has caused, the circumstances of Mhelody’s family, and the impact this is having on the Australian trans community.

What was the reaction of those who’ve been campaigning for justice in regard to Mhelody’s death?

We were absolutely shocked. Just a 22 month community order? It’s just shocking to think the justice system has given no regard to how this would impact not only the family, but the whole trans community in Australia.

For me, I’m still speechless. I’m still trying to find the logic in it. And I’m also concerned as to whether Mhelody’s circumstances were even considered.

It makes me doubt the whole system. And it makes me feel incredibly unsafe, like we aren’t protected – there is no protection out there.

The judge presiding over the case accepted that even though Mhelody never explicitly discussed consented to being choked during sex, not only had she “consented to the act of choking but actually instigated it”.

What are your thoughts on the judge’s reasoning here?

The rough sex defence is so dangerous. It’s dangerous to blur these lines of consent and communication.

Mhelody never consented to being killed. That is what we all have to consider.

I read about a case involving the rough sex defence in New Zealand. And the investigators said that in order to actually kill someone while choking them you have to apply force for four to five minutes. That is such a long time to be choking somebody.

How is that considered kink? That is not kink. It is straight up physical violence. There hasn’t been enough nuance around how people are communicating consent here. Just to put it down to rough sex is a slap in the face.

The fact that she was a Filipino trans woman from overseas has been weaponised against her so it can be palmed off to kink. They’re conflating being trans and kink together.

The rough sex defence is close to the trans panic defence that was used against Jennifer Laude in the Philippines. It was said they didn’t know she was trans and then they panicked and killed her.

That is so inhumane to have that as an excuse to take someone’s life.

The NSW DPP said the case will be re-opened on Monday so Toyer can be resentenced, as a person cannot be placed on an ICO over a conviction of manslaughter.

What are you hoping comes of this?

I’m happy that the court has been challenged. It’s so unjust to palm this off with such a soft sentence, because there’s nobody advocating for her and there’s no money on her side.

It’s such a vulnerable case because her family is overseas and they’re extremely poor. There are all these power dynamics.

There should be some perspective on the differences between Toyer’s life and Mhelody’s life.

He’s enjoying freedom, but Mhelody’s family is so confused, lost and no one is communicating with them.

There is no information going back and forth between the Philippines and Australia. The family are just left in the dark.

Mhelody was the breadwinner for the family. So, all of that financial help has gone. There should be something done about victim compensation. That should be Australia’s responsibility.

The system failed Mhelody, and we all have a responsibility in making sure that justice is served.

The case should be considered properly, not just brushed off because nobody is challenging it.

How can people come to Australia and be murdered with no accountability?

The Justice for Mhelody Bruno rally heard from a number of community voices. We’ll hear from Migrante NSW, who are activists for Filipino migrants in Australia.

Trans Action spoke about how this is affecting the trans community, here and globally.

A number of people from the legal system also condemned the outcome of the case.

Artist Bhenji Ra said: “There’s not a lot of hope right now. But I do ask people to consider the case. and come to the rally. People need to talk about this. It’s a responsibility for all Australians to not just let this slide.

“How can we call this an equal society, when there is no real justice or accountability when it comes to women living their lives and trans people being murdered?”

At an earlier rally Ella Ganza of the Runway Movement wrote and delivered a powerful call to action in her poem about violence against transgender people, specifically transgender women of colour:

You will find us at the cemetery, amongst the darkest secrets,
Our identity – unknown
An act of your violence, never to have been rescued.
We have been pushed to the bitter end
No longer seen as beings
Treated as monsters, ostracized & vilified.
Our purpose merely dreamt
A journey to have never left the beginning.
Our refuge is each other
A sanctuary where only we know the struggle
An equation with no answer
Left without a formula.
We walk high because we have to
Our battle scars are concealed, primed, contoured.
You are forced to see only what we allow you to see,
Our beauty, luscious body, ravishing hair, enticing features and our statuesque physiques.

A femininity that has been built of a lifetime of pain, hate, rejection, discrimination. Marginalised even in our own community, silenced in that very rainbow.