Who is Policing Australia’s Lockdowns? Inside the Military-Police Interoperability Doctrine. 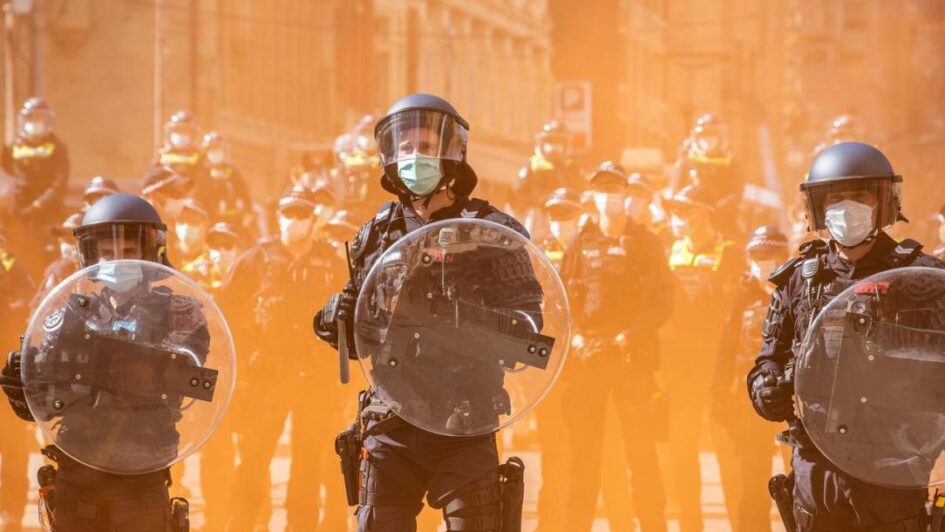 The brutality of the Australian government in suppressing opposition to its lockdown policies has provoked international outrage. Even the BBC propaganda machine has reported the terror struck into the hearts of residents.

Many protestors have been subject to unusually harsh tactics and have noticed special forces-type officers among regular police and military, raising questions about who exactly enforces the lockdowns and why they have been so violent.

In a possible violation of Section 114 of the Constitution, which prohibits the government from forming paramilitary organisations, Australian counterterror and other police units have increasingly trained with the Australian Defence Force (ADF).

But where did this begin and what impact is it having on policing the lockdowns?

The current trend of police militarisation has its roots in neo-colonialism.

Via the International Deployment Group (IDG), the ADF engaged with elements of the Australian Federal Police (AFP) in the ‘90s during United Nations-led deployments in Bosnia, Kosovo, Papua, Timor, and the Solomon Islands.

This led to the creation of the multi-million dollar Operation Response Group, which increased IDG personnel. By the mid-2000s, the AFP were engaged in “counter crime” operations in Cambodia, Colombia, and Vietnam.

These “policing the poor” missions were soon expanded to assist the US in its quest for “full spectrum dominance.” Australian military forces were deployed to US-occupied Afghanistan and Iraq. By 2004, the IDG was training the Afghan police.

The Australian Strategic Policy Institute notes: “the police have emerged as an important link in COIN [counterinsurgency].”

Today, the “insurgents” are lockdown protestors.

In 2007, the IDG argued that the AFP and ADF “need common ground in the areas of doctrine and communication.” This led to the development of interoperability and cooperation doctrines, such as LWD 0-1-3 Military Policing.

In such conditions, military will train police in “non-lethal” tactics, including detention, patrols, and alignment of military and police practice.

As the “war on terror” waned, focus was placed on “natural” disasters. Under civil emergencies response planning, new interoperability doctrines for the police and armed forces were developed.

Citing pandemics, the Department of Health, for instance, could authorise Medical Assistance Teams to operate abroad with the armed forces.

The official version of events has COVID arriving in Australia on 25th January 2020 in New South Wales and Victoria.

At the same time, the federal authorities dealt with the infernos. Under Operation Bushfire Assist, 6,500 Army, Air Force, and Navy personnel fought the flames.

The international military contingent included 99 personnel from the Papua New Guinean Defence Force, 87 from New Zealand, 80 from Japan, 54 from Fiji, 50 from Singapore, and 10 from the US.

The NZ contingent was part of the ANZAC Spirit.

Soon after, lockdowns began. A Public Health Emergency for COVID was declared by ACT on 16th March. Border restrictions were imposed in Tasmania on 19th March, the Northern Territory on 21st, South and Western Australia on 22nd, and Queensland on 24th.

In August 2020, Victoria’s Premier, Daniel Andrews, confirmed that 2,000 ADF personnel would be deployed to help police the lockdown. There is little information about the title, scope, and duration of these operations. Even less information exists concerning the nature of police-military training.https://tottnews.com/2020/03/29/military-deployed-quarantine-orders/embed/#?secret=zJa1pvOznM

In June this year, the so-called Delta variant reportedly arrived. In late-July, states eased some lockdown restrictions, but many restrictions remained and others drastically tightened.

At the end of July, it was announced that hundreds of ADF troops would enforce the lockdown in Sydney. On 14th August, NSW Premier Gladys Berejiklian confirmed that additional troops would be deployed. “This is literally a war.”

“If the objective was to frighten the hell out of the community, I can guarantee you they have done that.”

On 18th August, it was reported that 100 troops would be active in Queensland at the request of Premier Annastacia Palaszczuk to enforce the border with NSW.Advertisements

THE NATIONAL POLICE AND MILITARY

Citing non-compliance on the part of residents, NSW Police Commissioner Mick Fuller confirmed in July this year that 300 ADF personnel had been called upon the “boost” the police force’s “operational footprint.”https://tottnews.com/2021/09/12/nsw-police-enforcement-flawed/embed/#?secret=iUWjjdu46C

The Police Federation of Australia says that there are over 65,000 officers in all jurisdictions, including the commonwealth. The official figures say that by early-2019, there were 6,695 staff in the entire Australian Federal Police.

In 2015, the National Canine Program and the Air Security Officer Program were merged into the SRG. Operational Readiness includes the Extended Capabilities Team, which supports a unit called the ACT Policing Operational Support Group for Public Order Management.

Excluding reservists, there are 58,000 active members of the Australian Defence Force. By far, the Army has the majority of these personnel, with 40,000 serving and 14,000 Active Reservists.

Brigades and units include Combat Support, Aviation, Combined, and Forces Command. By 2014, there were 2050 Special Operations Command soldiers.

Because each state and territory has its own lockdown procedures and remit, there is no single doctrine for the AFP and ADF to follow. A similar theme, however, is the use of kettling by what appears to be riot squad officers.

In June 2020, the NSW Court of Appeal granted First Nations Peoples and Black Lives Matter protestors the right to demonstrate.

In November, it was reported that “in recent months” Victoria’s Public Order Response units had done the same to anti-lockdown demonstrators. Undisclosed units used teargas and stinger grenades.

It is also apparent that mercenaries have been operating. Without naming them, the Victoria Police stated: “The Licensing and Regulation Division (LRD) has been made aware that some private security licence and/or registration holders are using and/or displaying a badge that resembles the Victoria Police crest.”

Some have raised the possibility that foreign troops are policing Australia’s lockdown. Australia does have in place several reciprocal military arrangements.

In 2015, Singapore signed the Comprehensive Strategic Partnership agreement, in which 14,000 Singaporean troops will be trained at Shoalwater Bay Training Area, Queensland.

One of the oldest training alliances is with the US. Some imply that the foreign military personnel quarantined in the Northern Territory are secretly being brought in for deployment against Australians.

As the NT government refused ABC’s freedom of information request to identify the nationalities of the quarantined soldiers, we’ll probably never know.