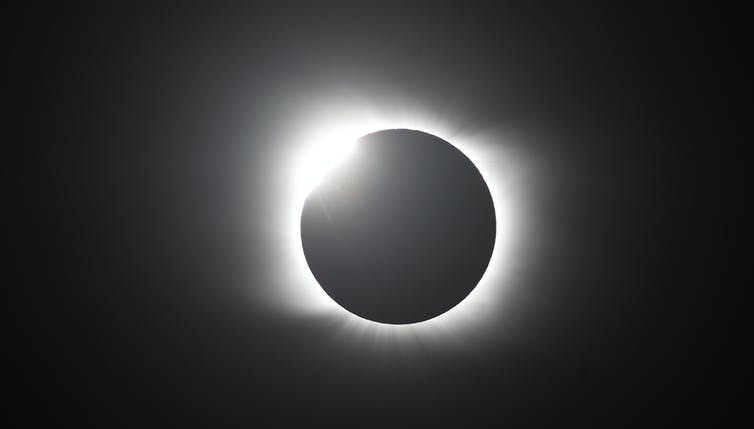 The Sun hasn’t set in Antarctica since October. Earth’s southernmost continent is currently experiencing a long summer’s day, one that stretches from mid-October until early April.

But on Saturday December 4, darkness will sweep across the ice of West Antarctica. The Moon will pass directly in front of the Sun, blocking its light and producing a total solar eclipse.

The path of totality crosses the Argentine, British and Chilean Antarctic Territories (which consist of overlapping regions), as well as the unclaimed territory known as Marie Byrd Land. Areas along the path will experience almost 2 minutes of darkness in the otherwise months-long stretch of daylight.

As the Sun sinks towards the horizon the Moon will appear to kiss the top-left of the Sun. Of all Australia’s capital cities, Hobart will see the largest eclipse, but even so only 11% of the Sun’s area will be covered. For Melbourne, this drops to just 2%, while in Canberra it’s hardly visible – the Sun is crossing the horizon as a tiny eclipse occurs.

It’s a similar situation in New Zealand. Invercargill will see 4% of the Sun obscured by the Moon, with the Moon passing by the Sun’s left side. But move further north to Queenstown and the eclipse is barely visible for the setting Sun.

In fact, if you weren’t aware of it, you wouldn’t even know the eclipse was happening. It’s not until about 80% or more of the Sun is obscured before we notice any change in daylight.

Solar eclipses are one astronomical event that require special care to observe. Most importantly, never look at the Sun directly – even when it’s low on the horizon.

Be sure to protect your eyes by using specially designed eclipse glasses. These glasses also allow you to see any sunspots that might be active. The Sun is currently moving from a quiet phase to an active one, as part of a cycle that repeats every 11 years. You can check websites such as Spaceweather to see what’s happening on the Sun’s surface right now.

Normally, the projection method is a great way to observe solar eclipses. This involves making a small hole in the bottom of a plastic cup or piece of cardboard. Then, with your back to the Sun, hold the cup so the sunlight passes through the hole onto a flat surface such as a piece of paper or a wall, projecting an image of the Sun on the surface.

But because this is such a minor eclipse and it will happen at sunset in eastern Australia, it may be hard to focus the Sun’s image in this way.

The rarity of totality

Solar eclipses are relatively rare experiences, because the Moon’s orbit is tilted by 5 degrees relative to Earth’s orbit around the Sun, so they don’t quite move in the same plane. However, roughly every six months the orbits align to produce a pair of eclipses – a lunar eclipse at Full Moon, followed by a solar eclipse at New Moon (as we are experiencing now), or vice versa.

The Moon’s shadow as it crosses the Earth is only 100-260km wide, and you have to be located within that narrow path to see the totally eclipsed Sun. This is why eclipse-chasers travel the world to be in the right place at the right time. But when totality occurs in a remote location like Antarctica it’ll be mainly the penguins who get to see it. https://www.youtube.com/embed/9Vp2jUQ4rNM?wmode=transparent&start=0

The next total solar eclipse visible from Australia will happen in April 2023. The band of totality will just clip Australia near Exmouth at the tip of the North West Cape in Western Australia.

But many more Aussies and New Zealanders will get to see a total solar eclipse on July 22 2028. Totality will stretch across Australia, from the top of WA down through New South Wales, passing directly over Sydney. It will also cross the South Island of New Zealand, passing through Queenstown and Dunedin.