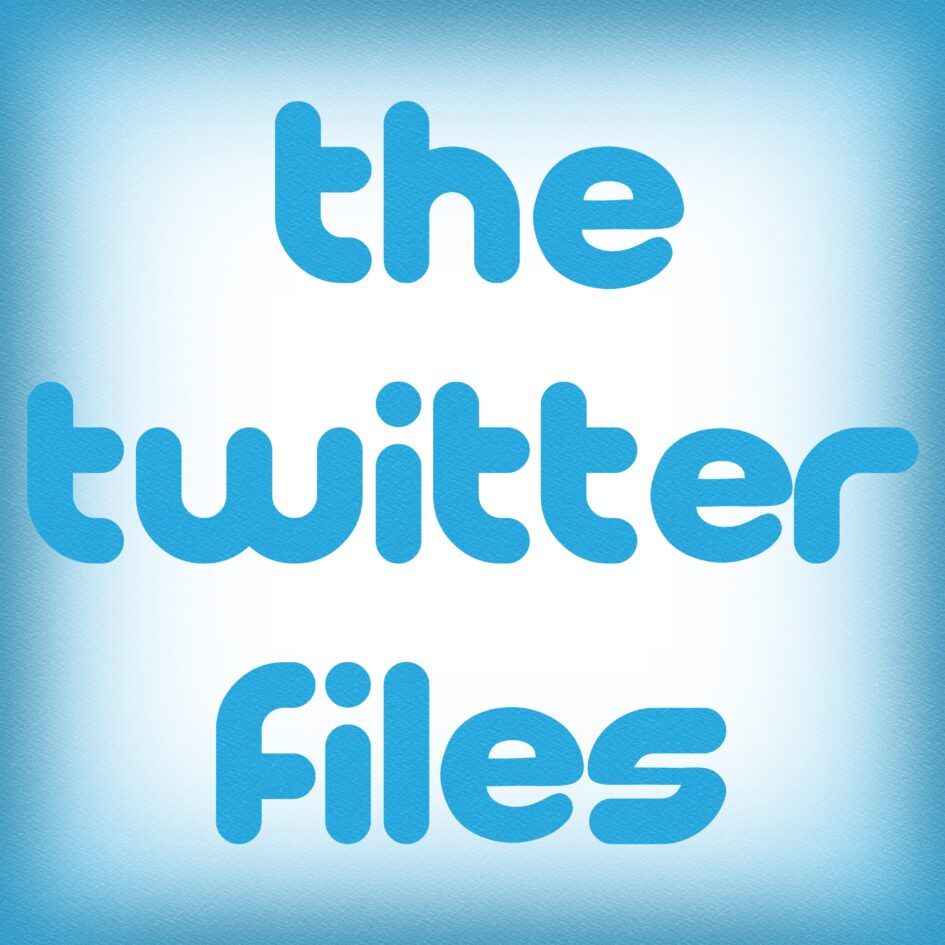 Since his takeover of Twitter Elon Musk has opened up the company’s records to some of America’s best journalists. The results have been absolutely spectacular.

One of those journalists Musk chose to help create what has collectively become known as the Twitter Files, a treasurer trove of material exposing state and intelligence agency manipulation of social media and thereby the democratic process, has been Matt Taibbi, the supremely bright and highly personable author of a number of books including Hate Inc.: Why Today’s Media Makes Us Despise One Another and The Divide: American Injustice in the Age of the Wealth Gap.

For those suffering information overload or who have had trouble following the welter of revelations, which is most of us, Taibbi has produced an extremely helpful compilation of capsule summaries of all the Twitter Files threads by every reporter, with links and notes on key revelations on his Substack Page.

You can see the originally collection of capsule summaries, which he is keeping updated, here.

Key revelations: Twitter blocked the story on the basis of its “hacked materials” policy, but executives internally knew the decision was problematic. “Can we truthfully claim that this is part of the policy?” is how comms official Brandon Borrman put it. Also: when a Twitter contractor polls members of Congress about the decision, they hear Democratic members want more moderation, not less, and “the First Amendment isn’t absolute.”

Bari Weiss gives a long-awaited answer to the question, “Was Twitter shadow-banning people?” It did, only the company calls it “visibility filtering.” Twitter also had a separate, higher council called SIP-PES that decided cases for high-visibility, controversial accounts.

Key revelations: Twitter had a huge toolbox for controlling the visibility of any user, including a “Search Blacklist” (for Dan Bongino), a “Trends Blacklist” for Stanford’s Dr. Jay Bhattacharya, and a “Do Not Amplify” setting for conservative activist Charlie Kirk. Weiss quotes a Twitter employee: “Think about visibility filtering as being a way for us to suppress what people see to different levels. It’s a very powerful tool.” With help from @abigailshrier, @shellenbergermd, @nelliebowles, and @isaacgrafstein.

First in a three-part series looking at how Twitter came to the decision to suspend Donald Trump. The idea behind the series is to show how all of Twitter’s “visibility filtering” tools were on display and deployed after January 6th, 2021. Key Revelations: Trust and Safety chief Yoel Roth not only met regularly with the FBI and the Department of Homeland Security, but with the Office of the Director of National Intelligence (ODNI). Also, Twitter was aggressively applying “visibility filtering” tools to Trump well before the election.

This thread by Michael Shellenberger looks at the key day after the J6 riots and before Trump would ultimately be banned from Twitter on January 8th, showing how Twitter internally reconfigured its rules to make a Trump ban fit their policies.

Key revelations: at least one Twitter employee worried about a “slippery slope” in which “an online platform CEO with a global presence… can gatekeep speech for the entire world,” only to be shot down. Also, chief censor Roth argues for a ban on congressman Matt Gaetz even though it “doesn’t quite fit anywhere (duh),” and Twitter changed its “public interest policy” to clear a path for Trump’s removal.

As angry as many inside Twitter were with Donald Trump after the January 6th Capitol riots, staffers struggled to suspend his account, saying things like, “I think we’d have a hard time saying this is incitement.” As documented by Weiss, they found a way to pull the trigger anyway.

Key revelations: there were dissenters in the company (“Maybe because I am from China,” said one employee, “I deeply understand how censorship can destroy the public conversation”), but are overruled by senior executives like Vijaya Gadde and Roth, who noted many on Twitter’s staff were citing the “Banality of Evil,” and comparing those who favored sticking to a strict legalistic interpretation of Twitter’s rules — i.e. keep Trump, who had “no violation” — to “Nazis following orders.”

Twitter’s contact with the FBI was “constant and pervasive,” as FBI personnel, mainly in the San Francisco field office, regularly sent lists of “reports” to Twitter, often about Americans with low follower counts making joke tweets. Tweeters on both the left and the right were affected.

Key revelations: A senior Twitter executive reports, “FBI was adamant no impediments to sharing” classified information exist. Twitter also agreed to “bounce” content on the recommendations of a wide array of governmental and quasi-governmental actors, from the FBI to the Homeland Security agency CISA to Stanford’s Election Integrity Project to state governments. The company one day received so many moderation requests from the FBI, an executive congratulated staffers at the end for completing the “monumental undertaking.”

THE FBI AND HUNTER BIDEN’S LAPTOP

The Twitter Files story increases its focus on the company’s relationship to federal law enforcement and intelligence, and shows intense communication between the FBI and Twitter just before the release of the Post’s Hunter Biden story.

Key Revelations: San Francisco agent Elvis Chan “sends 10 documents to Twitter’s then-Head of Site Integrity, Yoel Roth, through Teleporter, a one-way communications channel from the FBI to Twitter,” the evening before the release of the Post story. Also, Baker in an email explains Twitter was compensated for “processing requests” by the FBI, saying “I am happy to report we have collected $3,415,323 since October 2019!”

Lee Fang takes a fascinating detour, looking at how Twitter for years approved and supported Pentagon-backed covert operations. Noting the company explicitly testified to Congress that it didn’t allow such behavior, the platform nonetheless was a clear partner in state-backed programs involving fake accounts.

Key revelations: after the U.S. Central Command (CENTCOM) sent over a list of 52 Arab-language accounts “we use to amplify certain messages,” Twitter agreed to “whitelist” them. Ultimately the program would be outed in the Washington Post in 2022 — two years after Twitter and other platforms stopped assisting — but contrary to what came out in those reports, Twitter knew about and/or assisted in these programs for at least three years, from 2017-2020.

Lee wrote a companion piece for the Intercept here.

The Christmas Eve thread (I should have waited a few days to publish!) further details how the channels of communication between the federal government and Twitter operated, and reveals that Twitter directly or indirectly received lists of flagged content from “Other Government Agencies,” i.e. the CIA.

Key revelations: CIA officials attended at least one conference with Twitter in the summer of 2020, and companies like Twitter and Facebook received “OGA briefings,” at their regular “industry” meetings held in conjunction with the FBI and the Department of Homeland Security. The FBI and the “Foreign Influence Task Force” met regularly “not just with Twitter, but with Yahoo!, Twitch, Cloudfare, LinkedIn, even Wikimedia.”

David Zweig drills down into how Twitter throttled down information about COVID that was true but perhaps inconvenient for public officials, “discrediting doctors and other experts who disagreed.”

Key Revelations: Zweig found memos from Twitter personnel who’d liaised with Biden administration officials who were “very angry” that Twitter had not deplatformed more accounts. White House officials for instance wanted attention on reporter Alex Berenson. Zweig also found “countless” instances of Twitter banning or labeling “misleading” accounts that were true or merely controversial. A Rhode Island physician named Andrew Bostom, for instance, was suspended for, among other things, referring to the results of a peer-reviewed study on mRNA vaccines.

These two threads focus respectively on the second half of 2017, and a period stretching roughly from summer of 2020 through the present. The first describes how Twitter fell under pressure from Congress and the media to produce “material” showing a conspiracy of Russian accounts on their platform, and the second shows how Twitter tried to resist fulfilling moderation requests for the State Department, but ultimately agreed to let State and other agencies send requests through the FBI, which agent Chan calls “the belly button of the USG.”

New addition Alex Berenson details how Twitter throttled down or erased true information about COVID-19, with the help of a former Pfizer lobbyist, Scott Gottlieb.

One: The Fake Tale of Russian Bots and the #ReleaseTheMemo Hashtag Internal communications at Twitter show that Russian bots were not in fact hyping the classified memo of Republican congressman Devin Nunes in January of 2018.

Key Revelations: Three key Democrats — Senators Dianne Feinstein and Richard Blumenthal, and former House Intel Committee chief Adam Schiff — cited a think tank called Hamilton 68 in denouncing a memo by Nunes as aided by “Russian influence operations.” Yet all three were told by Twitter executives there were no Russians in the picture. Said former Trust and Safety chief Yoel Roth, “I just reviewed the accounts that posted the first 50 tweets with #releasethememo and… none of them show any signs of affiliation to Russia.”

A brief thread of 10 tweets showing that the former head of the House Intelligence Committee, Adam Schiff, sent repeated requests for bans of people critical of their office.

Key Revelation: Schiff and the DNC both not only asked for the takedown of an obvious satire by “Peter Douche,” but requested takedowns of accounts that were critical of the Steele dossier and outed the name of the supposed “whistleblower” in the Ukrainegate case, Eric Ciaramella. Schiff staffers said that while they “appreciate greatly” efforts by Twitter to deamplify certain accounts, they worried such effort s “could… impede the ability of law enforcement to search Twitter.”