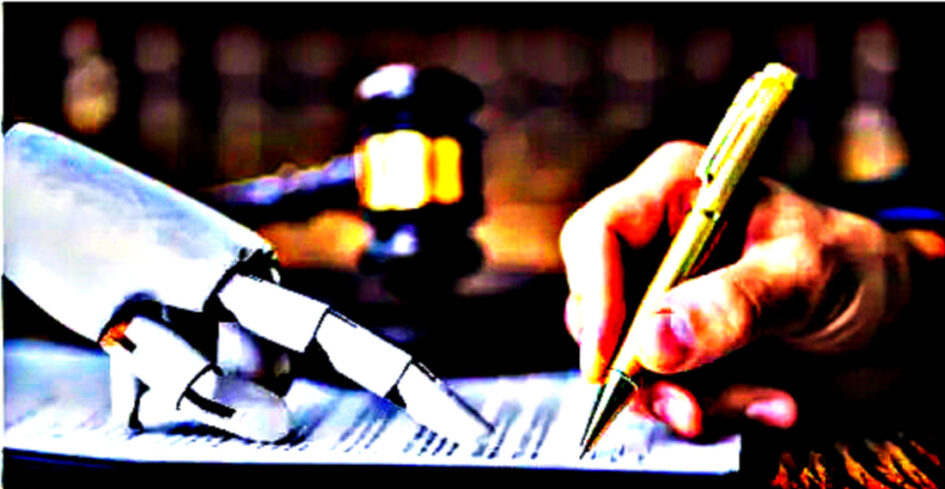 Welcome to 2023, a time when advancements in artificial intelligence (AI) have come so far that a robot lawyer is ready to argue its first cases in a real courtroom.

Artificial intelligence developed by startup company DoNotPay, will defend two speeding offences in court in the US in the coming weeks. Since its inception in 2015, the company has been assisting people with templates to help them appeal parking tickets or to request refunds from airlines.

DoNotPay has also provided legal advice to asylum seekers, and the company created a bot that can negotiate bills with large companies in the USA, like telecommunications companies and internet providers.

The latest evolution of the technology requires defendants to wear an earpiece with Bluetooth connectivity in the courtroom, and the AI will speak through the earpiece, instructing the defendant what to say.

DoNotPay CEO and Founder Joshua Browder says “the law is almost like code and language combined, so it’s the perfect use case for AI.”

The law is not ‘one size fits all’

And that might be all very well for something simple like a parking ticket where the rules are fairly black and white, but the potential for AI beyond that, where the ability to interpret the ‘greyer’ areas is very much a skill that takes years of study, knowledge and experience to develop, is entirely questionable.

There are so many intricacies in law, and nuances in every individual situation, it is doubtful that even the most intelligent software can make provisions for individual circumstances, over a ‘one-size fits all’ approach.

That’s not to say this technology doesn’t have a place.

Since the Covid lockdowns of 2020, courts around the world have embraced the use of technology in order to ensure that the wheels of justice keep turning.

Here in Australia, courts expanded the use of teleconferencing, videoconferencing and emails in order to deal with cases – had they not done so, this would have severely impacted the considerable backlog already facing the courts. And in many cases – smaller (’petty’) crimes or the processes for entering a plea, applying for bail and parole which are often quite straightforward could be successfully managed that way.

Some of the systems implemented during Covid remain in place and continue to work well, however, there is a lot to consider to ensure that the over-use of technology doesn’t impact the justice system in a negative way.

At its core, justice is about human behaviour, and for this reason, it’s important that defendants retain the right to be present in court, and come face to face with a judge or magistrate.

Research suggests that more than half of our communication is non-verbal – through body language, but audio visual, which tends to be limited to the head and shoulders, doesn’t pick up all of it.

There is also much more scope for legal representatives, such as criminal defence lawyers, as well as Judges and Magistrates to truly engage with a defendant in the setting of the courtroom, all of which is an important part of the justice system.

It has to be acknowledged that one benefit of technology such as the DoNotPay robot lawyer is that it can considerably lower costs, which could nbe appealing to those people who can’t afford legal advice. In the US, estimates from the American Bar Association show that about 80% of low-income earners cannot afford legal assistance.

In Australia, we have Legal Aid, which provides a number of services for free. However, it is increasingly in demand, so there is a set of criteria which people need to meet to be eligible for legal aid.

The fact is that the majority of those who are accused of crimes are typically from minority groups  – they are poorer, less educated. Certainly in Australia, Indigenous people have the highest rates of incarceration – and are the most likely to need specialist legal help to navigate the system, and have access to translators – not just if English is not a first language, but because of the convoluted language in the law itself.

So, could technology assist in streamlining some legal services and freeing up resources? Or in assisting with court delays? Only time will tell.

A law firm without lawyers opened in Darwin, in the Northern Territory in 2017, using software called Allira to write wills.

However, the firm’s owner concedes that while hundreds of people have flocked to use the service since it began, it is most suited to a specific group of people – those with straightforward legal and financial affairs.

That said, AI is the next big wave of investment in many business sectors, and it is advancing at a fast pace, so who knows what the future will bring.

DoNotPay is so confident in its technology that it has agreed to cover any fines not successful waived and the defendants will also be compensated for taking part in the experiment.

Furthermore, the CEO recently announced on Twitter that DoNotPay would pay anyone with an upcoming case in the U.S. Supreme Court $1 million to wear AirPods and let its robot lawyer argue the case.

The most notable thing that will come out of the upcoming cases, is whether or not they will help to break down some of the barriers to use, and, in particular, loosen the rules around the use of AI in courts, which are very restrictive in the US. If courts begin to accept the use of technology such as that offered by DoNotPay, then it’s possible that other countries will also follow suit.

Sonia Hickey is a freelance writer, magazine journalist, and owner of ‘Woman with Words’. She has a strong interest in social justice and is a member of the Sydney Criminal Lawyers® content team. Sonia is the winner of the Mondaq Thought Leadership Awards, Spring 2022. She is one of our favourite Australian journalists. You can see more of her work published in A Sense of Place Magazine here.