The Evidence is Out There: There Is No Excuse for Ignorance. The Grand Jury Of The Court of Public Opinion. 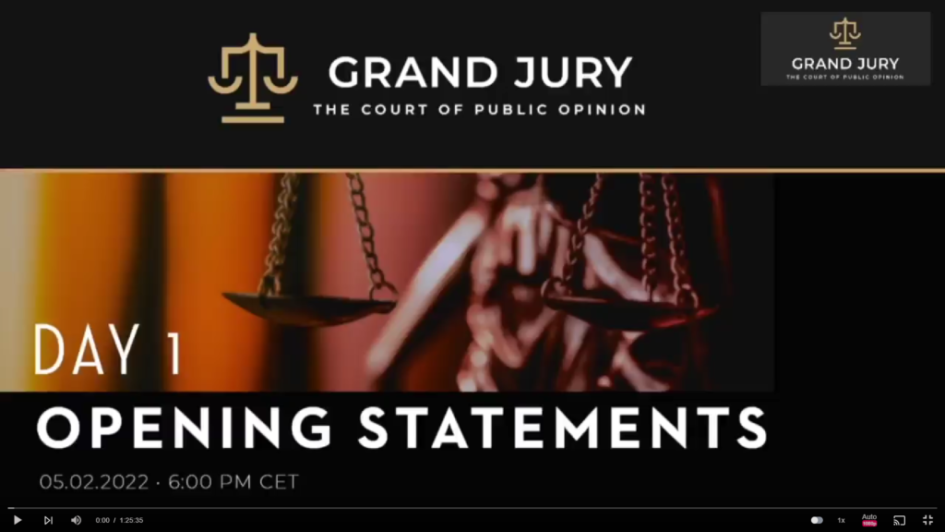 “After months of deaths and vaccine injuries, no one can plead ignorance.”

Now even one of the great censors and distorters of our time, the Google owned YouTube, is running at least some of the episodes of this forensic picking apart of the Covid narrative by some of the world’s most formidable experts.

The Grand Jury Proceeding by the Peoples´ Court of Public Opinion was originally conducted in Germany in February of this year, and was established as a model for courts around the world.

The Great Reset has become The Great Unravelling. Or as others put it, The Great Awakening.

You can watch the eight days of extensive evidence here.

From the crusading website Target Liberty: “Dr. Reiner Fuellmich is a consumer protection trial lawyer in Germany and California. He is one of four members of the German Corona Investigative Committee. In this video he is describing how there is no legal doubt about the possibility of a class action lawsuit against those responsible for the lockdowns. From the local level all the way to the WHO and many pharma companies in between. Please take a look as he is working very hard to end the insanity and make those responsible financially liable.”

In one submission to the Victorian Inquiry into the Government’s response to the Covid-19 pandemic Melbourne based advertising producer writes Kassandra Mouzis Brudenell: “I urge you to review the world’s largest tort case launched for covid related crimes against humanity.

“Leading German lawyer and member of the German Corona Investigative Committee, Dr. Reiner Fuellmich specialises globally on the prosecution of fraudulent corporations. He now leads a stellar team of international lawyers in what will become the world’s largest global tort case—against all protagonists and accomplices in what is now being termed ‘The COVID Scandal’.

“In this bombshell narrative, he lays down the background and details of the upcoming case. The game is over, the lies are exposed, people aren’t afraid anymore. The longer this charade goes on; there will be increased poverty, suicides and certainly vigilante rallies, as the police are no longer serving the people, but rather following unethical orders.”

Below is the official press release.

Grand Jury Proceeding by the Peoples´ Court of Public Opinion

Concerned lawyers from nations across the globe, working with esteemed scientists and medical experts, have come together to present the legal, scientific, and medical reasons why the populace must stop the Covid-19 measures and refuse the mRNA based injections that forced upon them. This Grand Jury Investigation serves to present to a jury (consisting of the citizens of the world) all available evidence of
Crimes Against Humanity committed to date.

We realize, of course, that the courts of law in the current systems, just like the health care systems, our systems of education, and the (global) economic order are compromised and dominated by those who are responsible for the measures that need to be stopped.

We have chosen the Grand Jury Investigation as the procedural foundation on which this proceeding takes place. But the proceeding itself will take place outside the current system, which in our view, is irreparably corrupt. That is, indeed, why we are not filing this case in one of the systems’ courts of law, which includes the International Criminal Court or the European Court of Human Rights.

Rather, we believe that it is of the utmost importance that the people themselves realize that they, their families, communities, and regions, are the only legitimate source of a truly “bottom up” democratic governance. Therefore, we, the people, must International Grand Jury Proceeding take back our sovereignty from those who have taken it from us and delegated it to anonymously and “top down” operating global corporations and institutions like the World Health Organization, the World Economic Forum and their minions, the so-called Davos clique, or: Mr. Global.

For this purpose, we have created our, that is: the peoples´ own court of law, the People´s Court of Public Opinion to conduct this Grand Jury investigation. This makes sure that this case of Crimes Against Humanity gets a fair hearing and will not be thrown out by the systems´ courts on dubious procedural grounds, or that a judge who is willing to apply the law as he should and thereby defies “Mr. Global’s” interests will be persecuted by the system´s puppets as happened in Weimar to two such judges.

This proceeding´s main purpose (apart from demonstrating actual evidence to the world and serving as a model proceeding for future legal cases to be filed) is to show a complete picture of what we consider massive Crimes Against Humanity rather than just discussing pieces of the puzzle. The supporting evidence will be presented by real lawyers and real expert witnesses to examine the evidence under the auspices of a real judge accurately and truthfully.

The court is completely independent and works only for the people for the protection and restoration of the rule of law, democracy, and our constitutions.

It is important to note, however, that each one of the participating lawyers has filed and will continue to file similar cases in their countries’ existing judicial system, and that these cases will be supported by our joint, worldwide effort.

The Grand Jury Court of Public Opinion´s initial purpose is to shine a bright light on all the details and actions that were committed under the guise of a pandemic and constitute Crimes Against Humanity. This proceeding will hopefully motivate people across the globe to institute criminal proceedings and civil proceedings (for damages, including punitive damages) against all those who are criminally and civilly
responsible for atrocities committed in their communities and regions.

Some judiciaries (India´s for example) may still be functioning and willing to serve the people in whose’ name they are supposed to render justice. But in many countries, especially in Europe, where the judiciary (just like the political system, including the International Grand Jury Proceeding health care system, the education system and economic system) has been infiltrated and compromised by those who committed the Crimes Against Humanity the legal system is irreparably broken.

Where this is the case, we, the people must reinstall the rule of law and democracy, based on our constitutions by setting up our own system of courts and justice.

Thus, the ‘Peoples´ Court of Public Opinion´s investigations are to provide guidance and to motivate national and international actions of transitional and transformative justice. It shall serve as a jump-start investigation that will be followed by many national criminal and civil proceedings as mentioned above.

Whichever path might be suitable under the conditions in your country, it must be peaceful and guided by democratic proceedings that constitute a citizen approved “judicial” system that strives towards transparency, equity and moral progression. In so doing, these proceedings aim to assist those segregated societies to escape the current tyrannical system and to address the inhumane shortcomings that have emerged under a socially constructed, but, in fact, fabricated state of health emergency.

Essentially, this is a global call to action, and these proceedings shall become the foundation of social reforms that will help communities to heal, but also hold all the perpetrators of these Crimes against Humanity responsible.

The urgency of the present matter cannot be understated. We all are responsible for re-claiming the citizen’s mandate of governance in our countries, and as a global community of human beings with respect for each other and other cultures, are called to ensure that human rights are preserved NOW and in the future.

The lawyers listed below, with the assistance of many highly respected medical and scientific scholars from around the world and under the auspices of a judge from Portugal, will conduct this Grand Jury Investigation, by which they will provide the People’s Court of Public Opinion with a complete and comprehensive picture of these crimes committed against humanity.

The Peoples ‘Court of Public Opinion works independent of any government and any non-governmental organization. Logistic support is provided by the Berlin Corona Investigative Committee.

You can watch the eight days of extensive evidence here.

A Sense of Place Magazine, A Sense of Place Publishing, Australian Independent News Sites, Dr. Reiner Fuellmich, the court of public opinion, The Grand Jury Of The Court of Public Opinion