The Daughter of Siberian Shamans 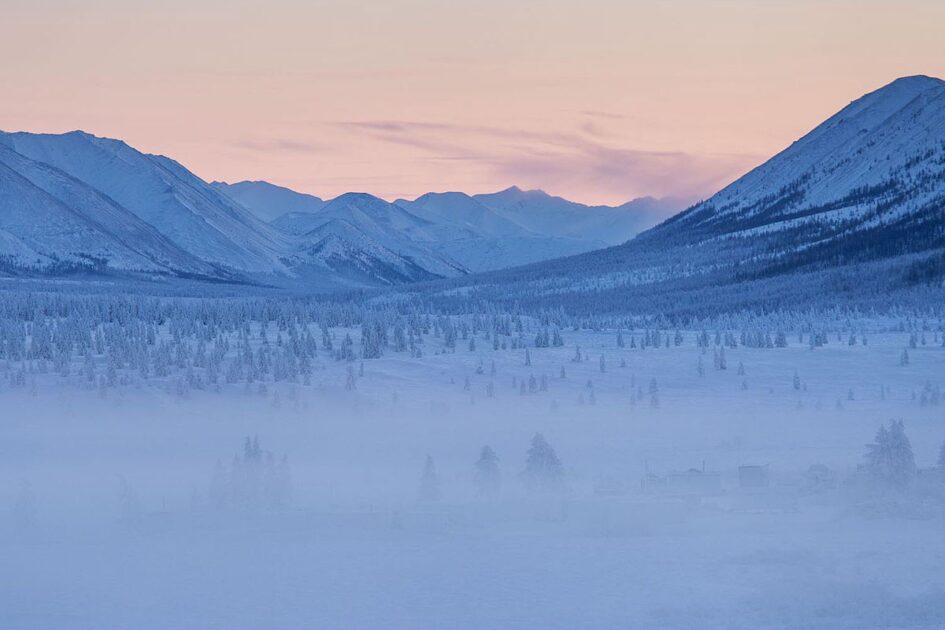 Yakutsk is the coldest place on Earth. Winter temperatures plunge below minus 50 degrees Centigrade.

The town of Oymyakom, in the East Siberian Depression, has recorded temperatures well below of minus 60.

The indigenous tribes of this most hostile of environments include the Yukighir, the Eveni, the Evenki and the Yakut.

Their original religion, shamanism, is an ancient cosmology. Shamans mediate between the spirits of nature and the world of men, between heaven and the underworld.

Masha Kovner was born during the Soviet Regime and lived through the economic and political crisis that followed the collapse of the Soviet Union.

In her own words:

My people breed horses and reindeer. They eat raw fish and raw meat. It is our traditional food. We are partly nomadic.

When I was growing up we were not allowed to speak our native languages, which in my case was Yakut.

We only spoke it inside our houses.

When I was a kid we lived in the Russian town of Yakutsk.

This picture was taken just after the Soviet Union collapsed. After the long communist regime we were allowed to return to our culture.

This was the first summer festival I participated in. During the communist era no religion, no beliefs, no traditional spiritualism was allowed. Everyone had to believe in the power of the Soviets.

We weren’t allowed our traditions. Look out our clothes. We are dressed up like Russians. Just ridiculous.

This picture was taken around 1990, just two years before my father died. He is the one on the left of me, with the black shirt.

This was the first time we were allowed to build our traditional summer houses after the communist regime.

My father was a very kind man with an open nature.

He was born into a family of shamans, but because of communism he was not allowed to talk about that.

Everything was forbidden, especially shamanism.

Every time he would quietly tell me the story of his grandfather, who was a very strong Siberian shaman.

The name was forbidden to say, but he would always tell me. And he would say he was a shaman too. But he could not talk about it, or do anything about it.

The Ban on Shamans came Before I was Born

Shamanism was banned in our culture since Lenin came to power. And Stalin. They were murdering all our Shamans, and the indigenous people’s cultures.

We weren’t allowed to talk about the Shamans in our family.

And literally every single family came from the Shamans. It was a big part of our culture, which was destroyed with white power.

The White Russians came to power in 1917, and destroyed everything.

Communism to me: everyone has to look the same, and we didn’t even look Russian. Or speak the same language.

I grew up with no opinion on anything. I could not express my opinion because I was not allowed.

We were told everything, what to do, what to say.

When I look back I see the sadness of the time, when I had to grow up feeling different because of who I was.

All the Past and all the Present Comes to Us Intense

The main religious icon of shamanism is the tree.

The roots below spread through the underworld.

On the middle level, the people are in and around and among the trees.

Its branches rise to the upper level; which is the domain of spirits. The tree therefore connects these three worlds. It is the gift of the shaman to draw these spirits into communion with the people from both above and below.

Shamans are of two types.

White shamans look upwards to the world of spirits and can bring blessings down on the people.

Black shamans deal with the underworld of disturbed spirits.

And are the most powerful of the two.

Their job is to placate and charm these evil spirits and to avert their malign interventions in the world of men above. One of their principal duties is to cure sickness which in the Yakut culture is usually ascribed to the work of evil spirits.

The beginning of the 1990s was the time when the USSR collapsed. A lot of countries, Ukraine, Kaskistan, Uzbechistan, George, Armenia, all became independent.

It was the biggest economic crisis we had survived in Russia. It started in 1991, began worse in 1992. That was the year my father was murdered.

We were living in Yakutsk. People had become very poor. All the money was frozen. The banks were frozen. We had no salary. My parents were paid in sugar and rice and potato. One day three men murdered my father on the street at night time and stole his car.

And that was how we were left with no father. He was our hunter, our breadwinner. Times were very tough after we lost him. And it was not just my family, it was everyone who endured that period of time.

It was a very hard time. The salary my mother had at work was with food. That was the salary of the people at the time; everyone was left with no money and no income.

And that’s where our traditions started to come out again. We started to celebrate our summer festival. We went back to our roots. Because the capitalism came, and we started to have more freedom in our opinions, what we say and what we think and what we want.

We celebrate about 21st of June, we celebrate the sun. We are meeting the sun with our hands. We believe that at that time the sun gives us the most energy.

We pray for our live for the future, for the whole year, to survive and to live well.

I went and studied history and anthropology at Yakutsk State University better to understand the traditions of the indigenous people of Siberia. When you grew up in the communist era, you don’t know anything about the people who live next to you. It is all forbidden. But when it became open, I was lucky. I grew up in a very happy family. My father was the first muralist, he was an artist and an historian, and he did a lot of militaristic Soviet posters.

My mother was a librarian, because she could supply books. We had a big library at home. We had very interesting anthropological, historical, ethnographically and art books.

Not many people had access to these sorts of books.

My mum would get us the rarest books because my father had a huge interest in the cultures of the world.

And that is how my sister and my brother and I grew up, having access to all these interesting books.

That time I was really shut into our shamanistic roots, and I started to go deep inside that.

I wanted to know more about the cultures of other indigenous people of the world. And to go deeply inside my own roots as well. To want to know who we are and where we came from.

My father’s grandfather was a very strong Siberian shaman.

My father was always telling me he was a shaman in a quiet way.

After he was murdered, every five or six months after he died, because I have shamanistic dreams all the time, and I travel in my dreams, very deep, in different layers, I would see the dreams.

I would hear the phone ringing, and feel a big pain in my left ear, and I would see the blood coming from my ears. I started crying because I knew someone was dying in my father’s family.

After a week or a month, we would have the news, mostly males, an uncle, a nephew, would have died, an accident or murdered. Lots of murders.

One by one, all my father’s male cousins died. Also his best friends. I lost so many uncles and so many cousins.

I am sure myself it was all connected to our shamanistic roots.

A relative of one of my father’s friends was a great specialist on totems and our native culture.

We told him the story, we don’t know what is happening in our family. We were very scared for the future of our kids.

They invited him to the land to look at the totem they had put in many years before. Our traditional totem has to be put in a proper way, with traditions, and a shaman, and a blessing ceremony.

My father’s friend noticed they had put the totem in an incorrect way.

He redid the entire ritual, taking out the totem and putting it in in the right way, with the ceremony of the blessing.

After all these ceremonies the deaths in my father’s family stopped. And we stopped losing males in our family.

Following Shamanism: Finding My Own Freedom

Since I was a small kid I travel in my dreams, in different shaman world’s. I am having a shaman’s dreams. Through my dreams I see what people feel. I can feel their situation, and see the future of some certain people. It just appears in my dreams.

When I was younger I would dream I lived faraway, near the ocean. It was in my mind I would have to live somewhere else.

Since living in Australia for more than ten years, I am more open about my roots. I have feeling and freedom in my thinking. I can see wiser. From outside, not from inside my society or my people.

So I started to use what I had learnt, and remember whatever my father taught me as a young kid before he died. Now I have a deeper understanding of belonging to the earth, and connecting to the land where you live. It is not an easy way. It is always hard work.

There are things that I have realized in Australia. That I had to be connected with indigenous people here to have a connection with the land; because this land does not accept people easily. I don’t know why.

You have to survive something here to get to a better life. I’m not sure everyone would know what I am talking about.

I don’t know have the words to express the experience — the one that I know is truest and deepest of them all.

Masha Kovner was born in Siberia in the Land of indigenous peoples in Yakutia and witnessed life after the collapse of the Soviet Regime.

Living and growing up in tough 90s and 2000 in Russia made her who she is now, politically oriented towards indigenous peoples.

After finishing school she went to the Yakutsk State University and studied History and Ethnology. She specialized in the traditional cultures of Indigenous people in Eastern Siberia. She also took a particular interest in Siberian Shamanism.

Coming from the family where her great grandfather was a Shaman, pushed her to study Shamanism and the traditional beliefs of her own people. The ancient traditions are still followed to this day.

Now working and living in Sydney, Masha Kovner continues to study and work in the preservation indigenous cultures and sacred lands.

This article was written and compiled by John Stapleton, who first made money out of writing in 1974. He worked as a staff reporter for The Sydney Morning Herald from 1986–1994 and for The Australian from 1994–2009. A collection of his journalism can be found here.