The Burning Ghats of Varanasi: Photography by Russell Shakespeare 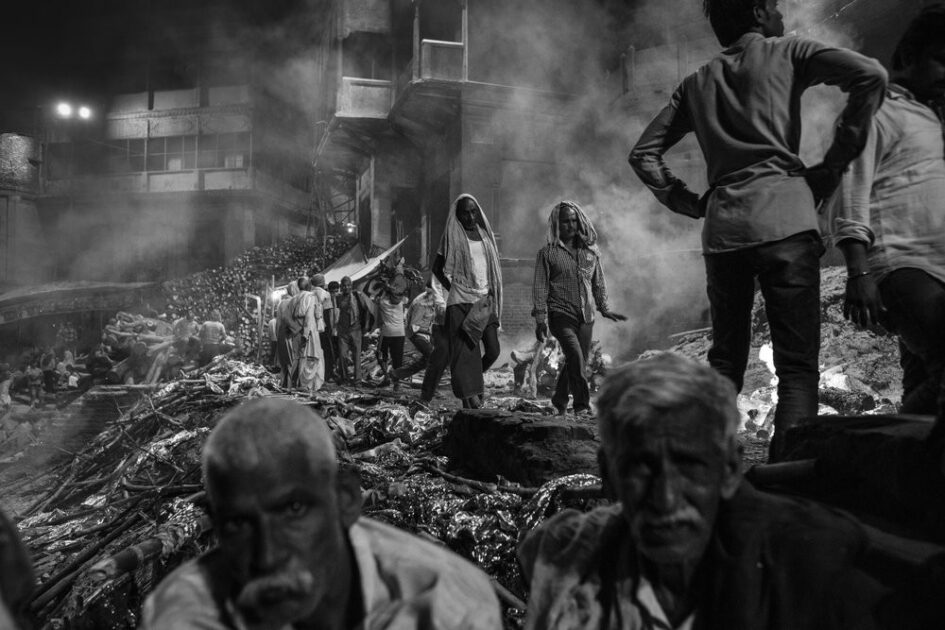 People crawl across India to die in Varanasi for one reason: according to the Hindu faith if you die there, on the edge of the sacred Ganges River, you will not be reincarnated. The cycle of life, and therefore of suffering, is over.

Accomplished Australian photographer Russell Shakespeare’s connection with India, and particularly the world renowned Burning Ghats of Varanasi, began back in 1987.

“Six months before going to India I was hit by a drunk driver and broke both ankles, both knees, nose, ribs, and couldn’t walk for three months.

“So when I arrived in India, I was on a walking stick.

“That was also the first year I was studying photography at the Queensland College of Arts, which is now known as Griffith University.

“I was stir crazy learning to walk again. Friends of mine were going to India, and I thought, why not?

“So I decided to go to India with a walking stick. The interesting thing about that, and this was really early in my photographic career, I was 24 at the time, and the stuff I was drawn to was more the street photography and people. That was what really drew me.

“When I got to India, and particularly Varanasi, I didn’t have an awakening or anything like that, but I suddenly knew the direction I wanted to go to in with photography — and that was telling stories.

“When I got to Varanasi, I knew this was the place I wanted to document.

“That was where I started learning to be a photographer. After my first trip to India, I didn’t go back to Art College. I knew at the time the course I was doing wasn’t the right one. It was more a technically based photography course, and I knew what I wanted to do. I had to follow my own direction, so I did.

“I decided to try and go back for three months every year and tell people’s stories.

The Boatman of Varanasi

My first trip to Varanasi was for two days.

The next year I came back for three months and did my first story, on the boatman Munna Lal.

We would spend hours on the Ganges River every day, and he would just row me around. I originally went just with the notion of doing a story on a boatman. I knew Munna Lal for fifteen years. He is no longer with us.

Over the time I knew him, each year or second year I would do a little update on him, as well as doing other stories.

He was never married.

My last memory of him, he was no longer rowing boats, but living in a small temple on the banks of the Ganges River, gathering his firewood from leftovers at the cremation sites.

Some of his wood would actually have human remains in them.

You could smell them. That was what we were sitting around, keeping warm and drinking chai as the last of someone or other went up in smoke.

I had never, never met a boatman in my life.

That first three month stint, all I could think of was that crazy song:

This was pre the digital age. Everything was hand processed in darkrooms.

Everything was a light meter in those days.

And Munna Lal seemed to understand what I wanted to do with the photography, how to position the boat to get the best shot.

Apart from being on the boat, we would meet at chai shops and we became good friends.

I would always buy packets of Camels, the unfiltered ones, before I went to India. And he loved them.

Every year I would take prints back to show him and he kept every last one of them.

He was more than a boatman. He was a friend.

My first view of Ramji was from a boat on the Ganges River in the Old City of Varanasi in North India 1988.

At that time he was just another unknown person drying off after bathing in the Ganges.

I returned to India in 1991 to do a three month project on the Boatmen of Varanasi.I saw Ramji almost every morning at one of the Tea shops near the river.

He was interested in why I was staying in Varanasi and what was I photographing. “Most foreigners only stay a few days,” he said. “What are you doing here?”

I told him: “I’m trying to learn to be a photographer.”

I was interested in how he saw the world and how he was living his life, so a friendship of sorts was formed.

Nearing the end of my time in India Ramji asked me if I would take his portrait and this began the start of the Photographic series on Ramji.

At this time he was living hard on the streets, not well and was smoking too much Hashish.

I caught up with Ramji again in 1997. He was still living on the streets but had cleaned himself up, no longer taking drugs.

Six months beforehand two cows were fighting in the streets and one of them hit Ramji. He was taken to Hospital and suffered a broken leg, which ended up not being set properly, Ramji was in a lot of pain and now needed a stick for support.

I continued going back to Varanasi in 2002, 2006 and 2008, I was never sure that he was still alive, there was no internet, telephone or postal box for a street person.

Amazingly Ramji was there as always living somewhere close to the river. His health was generally good other than the leg which gave him regular pain.

On all those visits to Varanasi we would always make a point of taking a journey to the village that his mother lived in. Ramji never stayed there, he was just another mouth to feed in a very poor family that never had anyextra.

In 2010 I returned again to Varanasi.

This time there was no Ramji.

After three days of searching in all his regular areas, I finally tracked down his brother who told me Ramji had died six months before of pneumonia.

Ramji was 55 years old when he passed away.

He was a good man and greatly missed. I photographed him for twenty one years.

The Streets of Varanasi

After Ramji died, I did not go back to India for more than three years. Ramji was India to me. Varanasi was a city of millions, but felt empty.

I decided to go back to my original love, which was street photography.

I would just hang out in chai shops across the city.

Instead of hunting for photographs, I just let India come to me.

I was more focused not on the river as such, but the backstreets and the alleyways.

The tourists were all on the rivers and the boats, and in any case never stayed very long.

One year I had all my photographic equipment stolen.

After that happened, it was another moment of clear direction — to travel simply and photograph simply was how I would do it from then on.

Instead of multiple lenses and multiple cameras, I would take one lense and one camera.

These days I travel with two cameras and two lenses; with one in the hotel as a backup.

The streets to me in Varanasi, and probably most of the cities in India, is where the real action is happening. It is where the everyday people are; and for me, as a photographer, you want to see the real India.

The boats and the people are very much a part of it, but I like the little mundane things that happen in the backstreet.

The End of Life

After Ramji, I really didn’t want to form any other such intense relationships in India.

It’s life and death. I didn’t want to go through that again. I wanted to put a shield around myself.

Then I met an Indian photographer around my own age in a chai shop. Anand Singh was a stringer, a freelancer who worked for various newspapers across India.

But he grew up in Varanasi. It was his hometown. He knew everything about the place. Very soon after meeting him, he said matter of factly, lets go photograph the burning ghats.

I had been waiting thirty years to document that place, because when I first started, at twenty four, I didn’t feel old enough, wise enough or accomplished enough.

It blew my mind, that there were bodies burning. That these fires were the end of multiple lives. The fires don’t go out. Twenty four hours a day, all year round, they burn.

In the meantime, I had been working in newspapers for 30 years. You do come up against a lot of death.

So when Anand ask me to come with him to photograph the burning ghats, it was like the invitation I had been waiting for.

Anand was highly respected. He introduced me to people around the ghats, and that was my entre. People were very open and receptive and happy to be photographed.

Varanasi has been inhabited for 5,000 years.

This point, where the burning ghats are located, is the most sacred place to be burnt on the Ganges.

“Varanasi strains under its own myths, which are contradictory, obscure and impossible to prove.”

Previous Collaborations between Russell Shakespeare and John Stapleton include:

The Ridge braces for a rush of red tape