The Bryozoan Mystery: A New Look at an Old Fossil reveals the Origin of these Tiny Coral-like Creatures 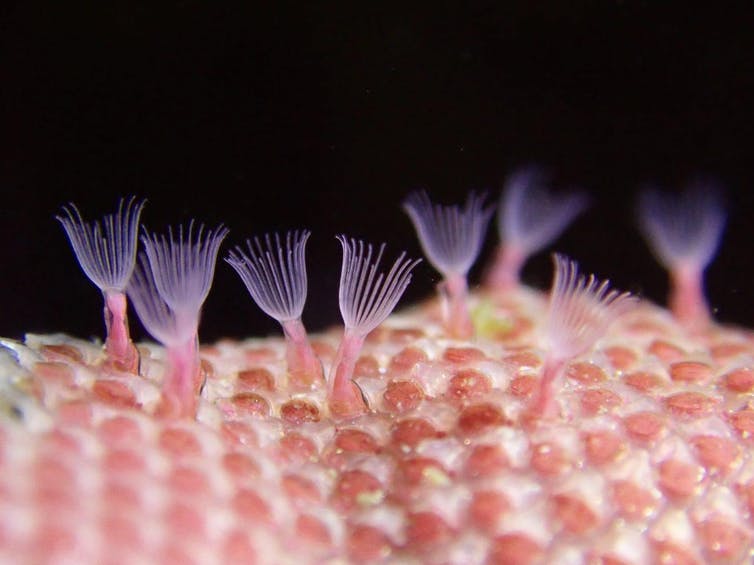 Most groups of modern animals had their beginnings more than half a billion years ago in an amazing evolutionary event known as the Cambrian Explosion.

This wasn’t the kind of explosion caused by a bomb or asteroid: we call it an “explosion” because of the huge and rapid increase in the diversity of animals we see in the fossil record during this time.

Many familiar features of today’s animals arose in this period. The first eyes and other sensory organs developed, and appendages for swimming and walking also appeared. Tooth-rimmed jaws for predation evolved, as did complex hard parts for protection against predators.

One group of animals, called bryozoans, has until now appeared to be absent from the Cambrian Explosion. In new research, we took a closer look at some old fossils and discovered these tiny coral-like creatures were indeed present during this riotous surge in the variety of animal life on Earth.

Have you heard of Bryozoans?

Bryozoans are a distinct group of water-dwelling, filter-feeding animals. Like corals, bryozoans form colonies of tiny individuals. They eat using a crown of fine tentacles called a lophophore to extract tiny food particles from the water.

Bryozoan colonies come in a variety of shapes and sizes, including forms that encrust rocky surfaces, delicate branching structures, and even small jelly-like mounds.

Because the colony is often constructed of a hard material called calcium carbonate (the same material from which seashells are made), bryozoans are easily preserved as fossils. This is why roughly 15,000 species of fossil bryozoans are known to science.

Despite all these fossils, the origin of bryozoans has remained a mystery. The group seemingly “bursts” into existence about 480 million years ago (some 50 million years after the Cambrian Explosion), during the Ordovician Period.

Before the Ordovician, there is no record of their existence. This “missing” record led many palaeontologists to speculate that bryozoans first evolved sometime during the Cambrian. But these early forms were probably tiny and delicate, and may not have constructed their colonies of calcium carbonate. This would make them much less likely to be preserved as fossils.

A new look at old fossils

Our research, published in Nature, reveals bryozoans were indeed present during the Cambrian Explosion. The key to solving the mystery of their origins is a strange, honeycomb-like fossil called Protomelission (the name means “first honeycomb”).

The first specimens of Protomelission were originally described in 1993 from important Cambrian rocks in the Flinders Ranges in South Australia. However, it wasn’t clear from these original specimens that Protomelission was a bryozoan. Then, in 2018, an almost identical specimen was discovered in China.

Using a state-of-the-art technology called micro-computed tomography (MicroCT), we looked inside Protomelission to confirm it is, in fact, a fossil from a bryozoan colony.

MicroCT technology is similar to a CAT scan in a hospital. Using a thin beam of X-rays, we peer inside the fossil in a series of narrow “slices”. We then use a computer to stack the slices together and produce 3D images and videos of tiny objects like Protomelission.

Our new images confirmed the fossil lacked the robust calcium carbonate skeleton that most living bryozoans possess. Based on our analyses, we can now say with certainty that bryozoans first appeared during the Cambrian Explosion.

It’s not every day the hidden history of an entire group of animals is revealed by the fossil record! For context, this would be like revealing the early ancestor of every fish, amphibian, reptile, bird and mammal all in one go.

Our discovery pushes back the first appearance of the phylum Bryozoa by about 35 million years, making Protomelission the oldest known bryozoan. Importantly, our results also mean that living in colonies, a rare feature in complex animals, also originated during the Cambrian Explosion.

The bryozoans can now take their place among the incredible evolutionary and ecological events associated with the rise of animal communities.