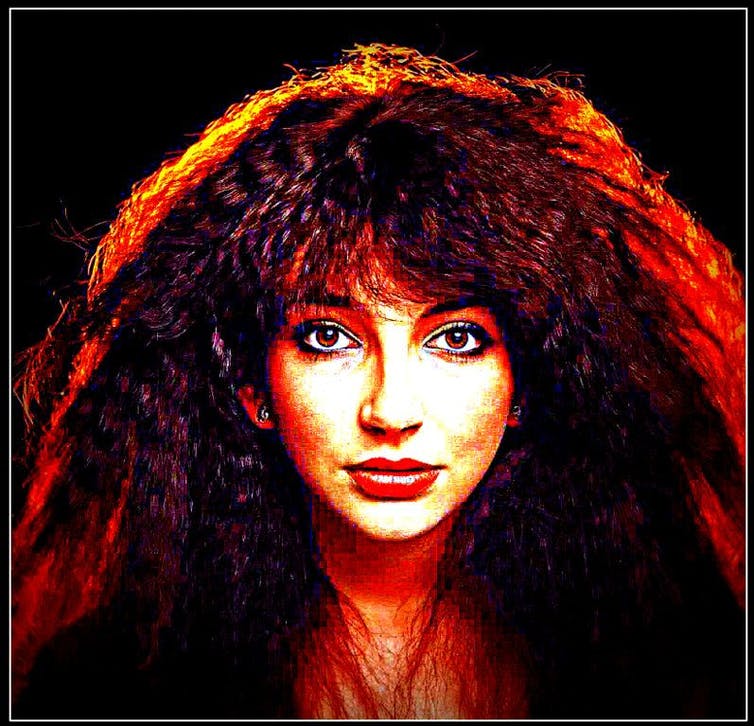 By Adrian York, University of Westminster

Kate Bush, the grand dame of British pop, has just been awarded a prestigious fellowship of the Ivors Academy, the UK’s independent professional association for music creators. It’s an appropriate honour – Bush is the artist who in many ways opened the door for women creators in the UK music industry.

She had the first female self-penned number one single and was the first to write all the songs for a debut album selling over a million copies. She also broke new ground by producing her own albums and taking control of her own management and music publishing.

Bush’s accolade follows hot on the heels of singer-songwriter Joan Armatrading, who received the same honour at the beginning of September 2020. Both women have distinct artistic voices, with Armatrading’s often guitar-driven songs investigating the complexities of personal relationships and Bush’s focusing more on narrative, mood and ambient soundscapes. A common musical feature is a shared engagement with rhythmic complexities, which they both handle with great sophistication and subtlety.

The Ivors Academy Fellowship is regarded as the ultimate recognition for UK composers and songwriters as it is bestowed by fellow creatives. The list of fellows is a who’s who of pop music’s great and good, including Paul McCartney, Tim Rice, Andrew Lloyd Webber, Annie Lennox, Elton John, Peter Maxwell Davies and David Arnold. Membership of this elite club spans the musical theatre, pop and classical worlds – and the addition of Armatrading and Bush adds some welcome diversity.

With the Ivors Awards having existed for 64 years, the fellows represent the post-war generation of baby-boomers and the global success of the British popular music and entertainment industry, now under threat from the consequences of COVID-19.

Bush grew up near Bexley, Kent in the south-east of England. With a Catholic upbringing, her father was a GP and her Irish mother was involved with the traditional Irish dance movement. The family were musical and Bush’s brothers were active in the local folk scene. She taught herself piano at the age of 11 and, supported by her family, soon started writing her own songs.

Through a friend of her family, Bush got in touch with Dave Gilmour, guitarist and singer with Pink Floyd, who helped her put together some demo recordings. On the back of these demos Bush signed a record deal with EMI, aged 16, and used part of her advance money to fund training as a mime artist and dance classes with David Bowie’s teacher Lindsay Kemp. This involvement with movement and theatricality was to become a hallmark of her music videos and live shows.

The impact of Kate Bush’s first single, Wuthering Heights, followed by the album The Kick Inside, was immediate and powerful. Released in February 1978, when she was 19, the track was ethereal, sophisticated and displayed an unnervingly complete artistic vision. It existed in a completely different world to what was in the charts at the time.

When I first heard Wuthering Heights as a 16-year-old schoolboy, I was bowled over by the musicianship of Bush’s piano playing and singing, the melodic, metrical and harmonic complexity, the extraordinary emotional world, the literary allusions and the otherworldly sexual and musical allure that she exuded. How could anyone just three years older than me be that cool; that talented?

Bush’s influences seemed clear – the pastoral prog rock of Genesis and singer-songwriters Joni Mitchell and Laura Nyro spring to mind. But Bush’s work combined this with a very English female sensibility infused with a Gothic twist to create something totally unique.

Still running up that hill

With a body of work that includes 25 UK top 40 hits and ten UK top 10 albums, nobody could accuse Bush of neglecting her public. But there have been long pauses between albums – and an almost unbearably long gap for her fans between her 1979 “Tour of Life” and her 2014 residency at London’s Hammersmith Apollo. It was this series of 22 theatrically conceived shows which were the hottest ticket in town and reaffirmed Bush’s position in the hearts of the British public.

How do Bush’s albums that followed The Kick Inside stand up to scrutiny? Lionheart was the 1978 follow up and is more of a companion piece than a development. In the 1980s, a sequence of five albums – starting with Never For Ever in 1980 – saw Bush using the new sampling technologies of the Fairlight CMI synthesiser, which – at times – seems to overpower the skill of her songwriting. https://www.youtube.com/embed/wp43OdtAAkM?wmode=transparent&start=0

In 1985, Hounds of Love was a return to commercial form with an A-side chock full of hit singles, including Running Up That Hill. But the next album of original material did not emerge until 1989 with The Sensual World and its standout track, the plangent This Woman’s Work. The subsequent studio album was 1993’s The Red Shoes, with the soul-influenced Rubberband Girl as the hit single. https://www.youtube.com/embed/85wZw1O83aE?wmode=transparent&start=0

In 2005 after a lengthy career break, Bush released the double album Aerial, nominated for Best British Female Solo Artist and Best British Album at the 2006 BRIT Awards. But there was still no tour to placate Bush’s fans.

Her tenth album, 50 Words for Snow, came out in 2011 and swiftly established itself as both a fan and critic’s favourite reaching number five in the UK charts. The duet with Elton John, Snowed in at Wheeler Street, is particularly emotionally affecting.

Bush’s career has set a high bar and a template for musicians wanting artistic freedom and a freedom to manage their own pathway through the promotional merry-go-round. The hope is now that this honour will spur her on and we’ll be hearing from England’s siren queen with the new album and live shows that her fans so desperately thirst for.