Julian to the Slaughter, as UK Moves Towards US Model of Killing Press Freedoms 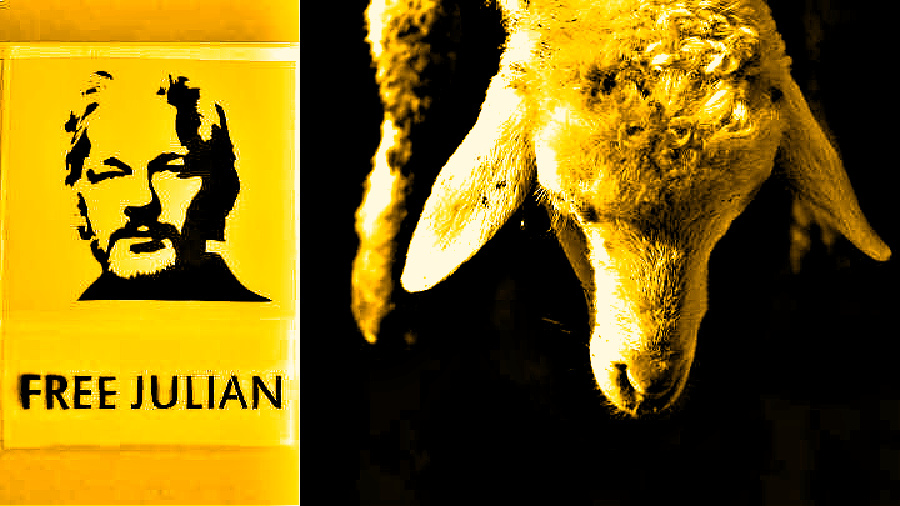 The Westminster Magistrates Court approved the extradition of journalist Julian Assange to the US on 20 April. The proceedings were a mere formality, as the High Court had overturned its original decision not to extradite on mental health grounds, while upholding the rest of the case against him.

This ruling came after the UK Supreme Court denied the Wikileaks founder his chance to appeal the decision in March. And the magistrates court has now passed the matter on to UK home office secretary Priti Patel to provide final approval on whether to send the Australian to the US.

If handed over to Washington, Assange will face 18 charges, the majority of which are espionage-related, over his publishing of secret US government documents that exposed that nation’s multiple war crimes in Iraq and Afghanistan, as well as its covert dodgy dealings around the globe.

Julian, his treatment and ultimate fate serve as a symbol to all who consider casting unfavourable light upon government. Indeed, if convicted, he’ll be disappeared into a US prison system designed to crush him, after suffering three years of torture on remand in the UK.

Assange’s legal team currently has until 18 May to make submissions to Patel in terms of her decision. And if the home secretary approves the extradition – and she will – the journalist’s lawyers can make one final appeal to the UK High Court of Justice in terms of that outcome.

Reporters Without Borders (RSF) and other key organisations have written to the home secretary requesting she reject US extradition, pointing to Assange’s health, an inadequacy to defend himself in the US courts with no public interest defence available and the preservation of press freedoms.

However, there are other matters at play in the UK that most likely mean Patel does not take up the offer of a meeting with RSF, as the home secretary supports a current proposal to toughen the UK Official Secrets Act 1989, so that her nation might come down upon journalists like Assange.

A process started in 2016, the UK Law Commission released its final report on the Protection of Official Data in September 2020. The main gist of the report is that “unauthorised disclosures” of information should be treated with the same level of severity as espionage.

Patel is a key figure endorsing changes to the Official Secrets Act. In fact, she heads the Home Office that produced the government’s official response, which agrees that unauthorised disclosures of information should be treated as seriously as spying, as they have the potential to do more damage.

The home secretary’s report also recommends consideration of laws to allow “non-British citizens” to be prosecuted for unauthorised disclosures, even if these actions take place in other countries, which directly mirrors what the US government is doing to Assange.

The government report only mentions journalist’s once, but the impact these laws would have on them is clear. And the Home Office also agrees that maximum penalties for unauthorised disclosures should be upped from 2 years, with some submissions recommending up to 14 years inside.

Of course, after the UK criminal justice system has remanded Assange for three years in close to solitary conditions, repeatedly stunted and denied him access to his lawyers and basically upheld the US position in its initial ruling on extradition, it’s hardly surprising it’s moving down the same path.

And there is a plethora of other key questionable aspects to the drawn-out extradition process that’s been transpiring in the UK.

A key point that has been raised since the process began is that article 4 of the UK-US Extradition Treaty clearly states that “extradition shall not be granted if the offence for which extradition is requested is a political offence”. And Julian’s case is, if nothing else, political in nature.

Another key matter that raised eyebrows is that a second superseding indictment was published by the US Eastern District Court of Virginia, prior to even lodging it with the UK court, fourteen months after the original indictment had been issued.

One note that bears mentioning on the choice of jurisdictions where Assange’s trial is set to take place, is that East Virginia is the headquarters of the CIA, the Pentagon, and other key US defence organisations, which means the jury will be comprised of former agents and family members.

In regard to the second indictment that was issued unjustifiably late, it’s also emerged that it was partially based on the testimony of Icelandic man Sigurdur Thordarson, who’s since admitted in the press that his testimony was based on lies, as he’d cut a deal with the FBI to keep him out of prison.

And another matter that begs the question as to why the case hasn’t been thrown out of court is that the US had been bugging Assange whilst he was living in London’s Ecuadorian Embassy, which included the White House having listened in to his private consultations with his lawyers.

The silence down under

Independent MP Andrew Wilkie has renewed his calls for prime minister Scott Morrison to pick up the phone and call UK PM Boris Johnson and request that he drop the whole matter against the Townsville-born Australian citizen, who is simply being persecuted for revealing the truth.

But the truth of the matter is, political prosecutions and the persecution of journalists who do expose the truth has become all the rage under the watch of Scott Morrison. And there are grave fears that press freedoms are under the same threats here as in the US and the UK.

The fact that Morrison, and the majority of others in federal parliament, have stayed silent on the matter of Julian Assange, as he’s had all his rights denied and been imprisoned for three years, even before he faces a swag of charges without having committed any crimes, is that they’re fine with it.