Is the Buff-breasted Button-quail still alive? After Years of Searching, this Century-old Bird Mystery Remains 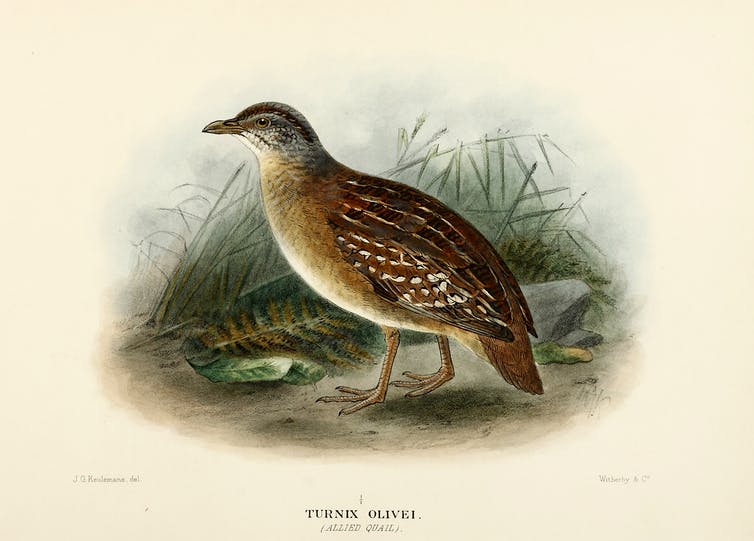 Patrick Webster, The University of Queensland

In humid savanna on Cape York Peninsula, February 5, 1922, a man was on the hunt with a local Indigenous guide. They had just heard their quarry calling among the tall grass – a low “oomm, oomm, oomm” – before it burst into view with a flurry of wingbeats. A loud shotgun blast, and the bird dropped to the ground.

The bird was a buff-breasted button-quail, and the collector was Australian field naturalist William Rae McLennan. Later that evening he would have skinned and stuffed the bird, turning it into a museum specimen, before describing the encounter in his diary.

This skin was the last of the species ever collected. A century later, we have still yet to confirm any sightings of this mysterious native bird.

I’ve spent four years searching for the buff-breasted button-quail, walking hundreds of kilometres and spending months scouring practically every locality where the species had ever been reported. All I’ve been able to find is its more common cousin: the painted button-quail.

Still, my ongoing research has brought us a step closer to solving this mystery and I remain hopeful the bird is still in existence. If it is, it urgently needs our help.

Searching for a lost species

McLennan’s diary from that wet season of 1921-1922 has remained the only detailed descriptions of the buff-breasted button-quail’s ecology. Some 60 years later in 1985, it was “rediscovered” just west of Cairns, and this launched dozens of new sightings by birdwatchers and several research projects over the next few decades.

Unfortunately, none of these reports or research endeavours produced anything more than brief sightings of the bird, typically only split-second views as it flew off from under their feet. No photos, no specimens, nor any other verifiable evidence has been produced.

For my doctoral project on the species, I joined the RARES research group at the University of Queensland in 2018. Our research team aimed to find a population, study its ecology, determine what threatening processes had led to its rarity, and learn how it could be conserved.

There were a few times in far north Queensland’s wet-season – supposedly the best time of year to see buff-breasted button-quail – when I saw birds fitting its widely accepted description: they were large, with sandy rufous (reddish brown) back and rumps, and contrasting dark primary feathers.

But whenever I thought I saw one on the ground, it turned out to be a painted button-quail. These differ by having a bright red eye and a grey breast.

Given there had been numerous reported sightings of buff-breasted button-quails from the region in the years prior, finding only painted button-quails was surprising, confusing and raised serious concerns.

Indeed, my research team and I became increasingly apprehensive about the status of the buff-breasted button-quail, and began questioning the features used to separate them from painted button-quail. This prompted a thorough investigation of all historical reports, and the reliability of characteristics used to identify the two birds in the field.

Has the bird been misidentified?

To determine how best to separate these two species in the field, I examined over 100 button-quail skins in museum collections worldwide. I also caught and photographed painted button-quail throughout north Queensland. What I discovered was intriguing.

Several supposedly key characteristics of the buff-breasted button-quail either did not exist, or were actually features of the painted button-quail.

For instance, it was commonly reported that buff-breasted button-quail were much bigger than painted button-quail. My study of museum specimens, which is not yet published, showed the two are actually the same size.

I also discovered a previously undocumented colour variation in the plumage of painted button-quail. At the start of the wet season when they begin breeding, the female’s typical grey plumage is replaced by a much brighter rufous plumage. This brighter plumage is very similar to the sandy rufous colour expected of a buff-breasted button-quail.

This apparently breeding-related change in plumage was completely unknown, and its seasonal timing coincided with an increase in reports of the buff-breasted button-quail.

In short, with no hard evidence of the buff-breasted button-quail’s existence for 100 years, many of the most recent sightings of the species could actually have been the much more common painted button-quail.

This means the buff-breasted button-quail is likely far rarer than we could ever have ever feared.

What does its future hold?

We realised too late that these unique species were in decline. Have we made the same mistake with the buff-breasted button-quail?

We already knew the bird was rare, but was our confidence in the species’ status misplaced, propped up by misidentifications of a more common species?

Aside from a clutch of eggs collected in 1924, there has been no incontrovertible proof the species continues to exist. Our extensive searches at sites where it was once found have failed.

We also know the bird communities of Cape York have been changing at a rapid rate, mostly due to the impact of changed fire patterns and cattle grazing. Other iconic Cape York species – such as the golden-shouldered parrot and red goshawk – have also declined over the past decades.

It seems likely the buff-breasted button-quail has suffered the same fate. It may not be extinct, but our research suggests it may only be hanging on by a thread, at best.

This 100-year anniversary is an opportunity to recognise the bird’s dire situation. Our new findings should prompt the federal and Queensland governments to act.

First, they should invoke the precautionary principle, which is to improve conservation actions for the species in light of its uncertain status. They should also immediately up-list the species to critically endangered, as right now it’s listed only as endangered.

Second, they should urgently provide the resources needed to re-evaluate the species’ conservation needs, as the status quo is not working.

We hope these efforts will prove the species is still in existence – perhaps living in a previously unsurveyed part of Cape York – and not another one that has disappeared on our watch.