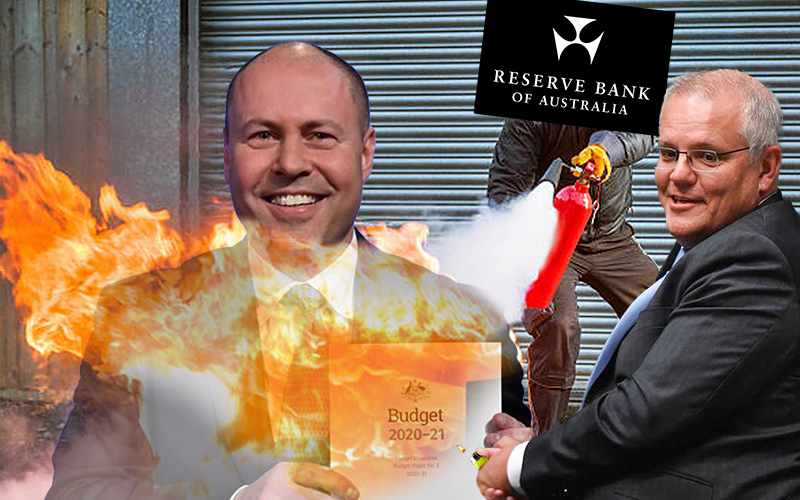 Extraordinary details have emerged of how the Reserve Bank intervened to stop Treasurer Josh Frydenberg crashing the economy as the pandemic took grip, how, contrary to their fable of “superior economic management”, the Morrison Coalition pursued political gain over good government, and how they have been borrowing its billions almost for free.

In markets, any market really, the trick is to “buy low, sell high”. That’s pretty much it. Australia’s self-styled “superior economic managers” of the Coalition government, however, have a penchant for doing the very opposite, “buy high, sell low”. And doing it with other people’s money, our money, the money of ordinary Australians.

So committed is this duo to winning political points, so dedicated their pursuit of the economic myths of “debt and deficit”, that the Reserve Bank has been forced to intervene to stop Prime Minister Scott Morrison and Treasurer Josh Frydenberg sabotaging Australia’s economy. Yet they are the masters of marketing and media management, of spin, and that is why you will not read this story anywhere else.

It is a story best told in the life cycle of a bond, a bond issued by then treasurer Morrison and then secretly bought back by now treasurer Frydenberg – yes actually purchased by Frydenberg as the sharemarket was crashing during the pandemic.

A bond is simply a debt created by the government to raise money. It is an IOU. The government raised more than $300 billion by selling bonds during the pandemic to finance things such as the $89 billion in JobKeeper. When the banks buy these bonds, they are lending this money to the government. Now, it’s payback time.

Life cycle of a bond

Next Tuesday, December 21, marks the end of life for a $16.4 billion issue of Australian Commonwealth Government Bonds. Already, the Reserve Bank owns $3.7bn of this series of four-year bonds. Banks and investors hold the rest. The government will pay back this money in a week. Not a particularly gripping set of circumstances, one would think.

But these particular bonds (and there are lots of other bond issues, hundreds of billions in other debts) which have been on a journey, a journey which tells us much about how the government and the RBA interact; how the RBA “prints” this new money, how these new Australian dollars are “shredded” later, and how much, or more importantly how little interest the Federal Government actually pays on its debt.

Birth of a bond

In January 2017, Morrison was treasurer. It was 18 months before the Liberal Party putsch ended the prime ministership of Malcolm Turnbull. Mathias Cormann had been finance minister for three years. And a youthful Frydenberg was minister for environment and energy, scrambling to deliver a semblance of action on climate change while appeasing the Coalition’s corporate fossil-fuel donors.

Debt was on the rise. The Morrison treasury planned to issue $9.3bn of brand new bonds. These new bonds were designed to pay whoever bought them at auction 2.0% interest over 4 years.

But the market wanted more. The banks demanded a higher interest rate on their investment: they wanted 2.24%.  So the Treasury got $100m less than it bargained for; it had to pay back $9.3bn but it only got $9.2bn.

The government was to repeat the process 15 times until April 6, 2018; until it borrowed $17.8bn, all in this same series of 4-year bonds, all paying 2%. And these borrowings are to be repaid, by the government, next Tuesday.

On April 2, 2019, Frydenberg, now treasurer, launched his “duelling budgets”, firing a shot at Opposition leader Bill Shorten, asserting that he would bring the Budget back to surplus. They campaigned on it – they always do – repeating their mantras of “superior economic management” and “Labor’s debt and deficit”.

Shorten lost the election six weeks later. It was a Morrison “miracle”.

To achieve his surplus, Frydenberg took more out of the economy in tax than he put back in. The economy deflated. We were heading for recession, even before the pandemic hit. Over in the Martin Place bunker, Reserve Bank governor Philip Lowe warned repeatedly this was not a good idea. In the lexicon of the central banker, the warnings could not have been more emphatic.

Indeed, if you take money out of the economy, slash and burn to balance the Budget, the economy is at risk of deflating.

On September 19, Josh declared a balanced Budget. He nearly got there but, on the numbers, Australia recorded a small deficit. For the press pack it was a case of close enough is good enough. Yet the damage had been done.

The economy was stuttering, and then, reinforcing the Coalition’s commitment to its myths of debt and deficit, Frydenberg did the most bizarre thing, or at least his Treasury was instructed so.

When you buy your own debt

A few months later, in January 2020, Frydenberg quietly began spending government money buying back our bonds, the very four-year bonds which mature in seven days. First, he bought $299m worth, but paid $306m. On the day the pandemic began, the day financial markets went into a tailspin, he bought another another $350m worth. Again, he paid overs, forking out $359m.

The banks would hardly complain. They were buying low and selling high, thanks to Josh and Scott’s Treasury.

Even as the economy and financial markets were in distress they kept going for another month. Bear in mind, this was money, public money, which they would need to rescue a foundering economy. This was a serious crisis; and yet they kept spending money buying their own bonds, presumably trying to get their debt down for some political purpose, to crow about their prudent fiscal management.

We can only surmise that the hard heads in Treasury, if the underlings were brave enough to point out the obvious – that it was foolish to contract the economy when it desperately required stimulus, must have warned the world was going the other direction.

We can only surmise that they were not deliberately sabotaging the economy for the sake of some announcement, but that they were heeding the advice of the party strategists and dark-arts merchants of political PR over Treasury advice. We don’t know. Over at the Reserve Bank, Lowe and deputy governor Guy Debelle must have been tearing their hair out.https://www.michaelwest.com.au/the-printer-and-the-shredder-reserve-bank-has-neat-trick-to-tackle-rising-interest-rates/embed/#?secret=xqkDo4anxC

Down in the nation’s capital, in Lobbyland, somebody was instructing Treasury again to buy big on March 18, 2020. In eight weeks, as the world was gripped by the spectre of mass death and financial market destruction, Frydenberg had spent $1.4bn of public money, buying our four-year bonds at top dollar.

The next day, the RBA stepped in and put a stop to it. The very next day.

Morrison and Frydenberg had been crippling the economy for the past month but their hand was forced. Around the world, the Zooms were going off; central banks agreed to crash interest rates by buying bonds – not selling bonds, buying bonds to stimulate world economies.

Our central bank, the RBA, declared an immediate drop in interest rates. It even had a special meeting, the first departure in 50 years from its first-Tuesday-in-the-month routine.

Same deal around the world. Central banks went into overdrive, sharemarkets bottomed out. The ASX had been routed 25%, shed a quarter of its value, and the $A had crashed from US75c to US56c. Frydenberg’s debt and deficit crusade was over in a city second.

Quickly, in an 100% volte-face, Morrison and Frydenberg turned their attention to spruiking JobKeeper. They would borrow back all the money they had just spent, plus a lot more.

And next Tuesday’s bonds? As a result of Frydenberg’s clandestine bond-buying spree, there are only $16.4bn left in private hands, although that is about to change. The RBA has entered the market, and it has been buying these four-year bonds, and many others.

When financial markets are distressed, the RBA makes sure the banks have cash. Liquidity is the main game. All the world’s central banks agree, and they act together.

The RBA does not hand out free money. Instead, it stands in the market and says it will buy government bonds from the commercial banks, if they want to sell.

The deal is the RBA will swap the bonds for new money, paid straight into the bank accounts of those institutions lucky enough to hold a banking licence. This is called QE (Quantitative Easing), or central bank bond buying, or printing money.

But never fear, the RBA will soon shred that new money supply. They don’t want too much inflation.

End of the life cycle

Over six months from March till September 2020 the RBA bought $3.74bn of our particular four-year bond issue, the Morrison debt – as well as loads of other bonds. It would pay $3.86bn, a nice price and a very tidy profit for the banks.

Why then is the RBA buying bonds any different to Frydenberg buying all those bonds just as the pandemic struck? The difference is that Josh, and any other treasurer for that matter, uses our tax money. But the RBA prints its own money.

Today, he RBA owns 23% of our (Scott Morrison series) four-year bonds, the ones which started their life back in 2017. And the government pays them out, pays back its debts, next Tuesday.

This is where the magic starts.  Some quietly-spoken big-picture people at the Reserve Bank have thought this through.

Tuesday is pay day. Firstly, the government pays all the bond holders, including the RBA. The RBA gets $3.7bn.

Second, funding the repayment destroys this money, cancelling it. The money supply goes down. It’s a nice weapon too in the armoury of the RBA in its key job of managing inflation and interest rates.

Third, the RBA also receives the last interest payment on these bonds. It keeps this, and puts it in its profit and loss account. Total interest received by RBA on these bonds amounts to $117m.

What happens to this interest? It is distributable to the RBA’s owner, the federal government. It therefore goes around in a circle. This is no household budget. Households don’t buy their own debts and create their own money.

The effect of all this is that the money supply goes up when the RBA buys bonds and goes down again when the government pays out. QE balances out. Not quite the bogey man is it held out to be.

According to the RBA’s 2021 annual report, $3.9bn is now payable to the government by the RBA.  Quite the profitable bank.  And who gets the profits? There is such a thing as free money after all.