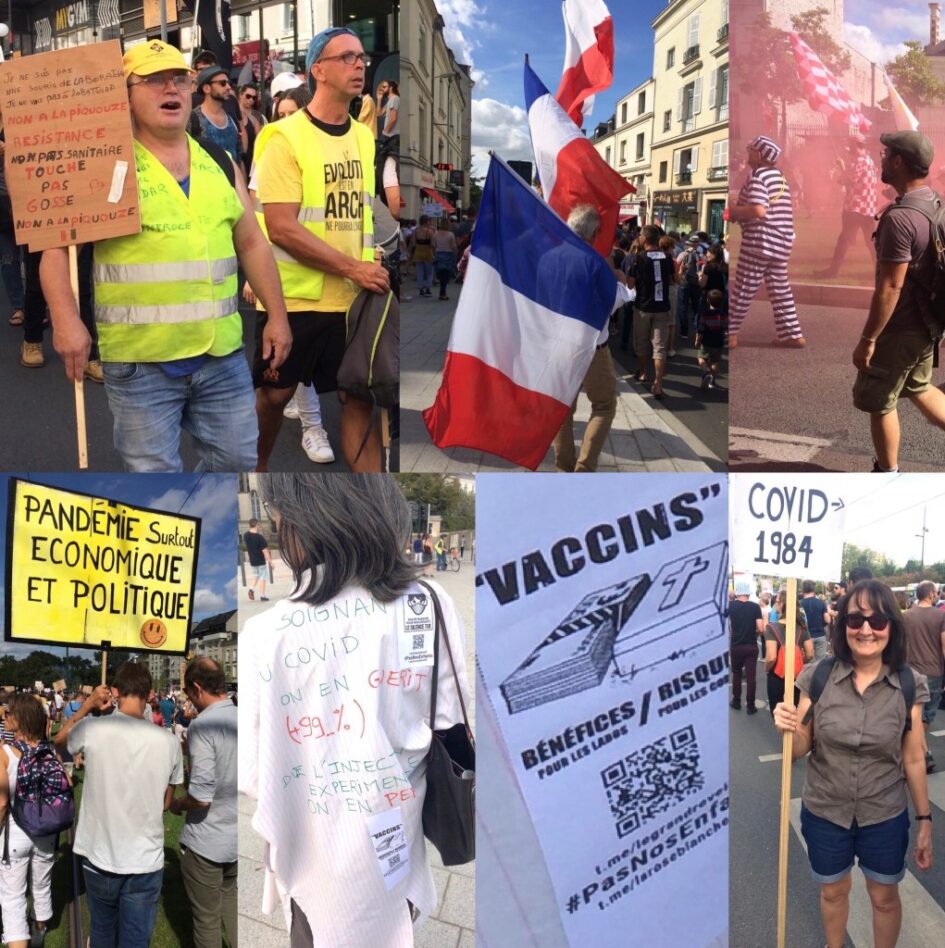 By T.J. Coles with TOTT News

Translation: ‘I’m not a laboratory mouse. I won’t go to the Labattoir. No to the jab. Resistance. No health pass. Don’t touch the kids. No to the jab.’

Hundreds of thousands of French people, from small towns to famous cities, continue weekly demonstrations against the government’s health passport, which prevents the unvaccinated and those without PCR tests, from enjoying the same rights as the jabbed.

I was in one such town in September, took some photos, and asked protestors about the demonstrations. Apart from the small number who blocked traffic and jeered the police, many live in fear: fear of arrest, fear of being sacked, fear of further ostracism.

While those holding signs didn’t mind being photographed, none of the people to whom I spoke in detail wished to be identified.

In the early hours of 26th July, French Senators and members of the parliament (deputies of the Assemblée nationale) compromised on a draft of the Bill on the Management of the Health Crisis (nos. 4415, 4416). The Bill was adopted 156 votes to 60.

Left-wing populists led by the leader of La France insoumise (France Unbowed), Jean-Luc Mélenchon, as well as a small number of “centre right” deputies, voted no. Mélenchon pointed out that abstention was complicity.

The “compromise” guarantees a periodic review of the law, which mandates that long-distance travellers, bar and restaurant customers, caregivers, and many others provide a scannable health pass (pass sanitaire) confirming their vaccine or COVID status in order to continue working and enjoying services.

The law was imposed because France had some of Europe’s highest rates of vaccine scepticism. By late-2020, 60 percent of the public said that they did not intend to be injected. The regime of President Emmanuel Macron and his “centre-left” (read: neoliberal right) regime, La République En Marche! (The Republic, Forward!), introduced the Bill to bully the public: get jabbed or face social exclusion.

While it is tempting to romanticise the French and their history of revolution, the reality is that most humans regardless of their culture will, if not obey authority, crack under pressure from their peers. When it became apparent that people would no longer be able to meet their friends for coffee in public spaces or attend entertainment venues, vaccination rates shot up (pun intended).

By May this year, just 20 percent of the population was vaccine hesitant. The pass sanitaire came into force on 9th August. By September, with the law in full force, 49 million of France’s 65 million people had been injected (45.8 million double-jabbed).

Yet, many still resist.

Macron announced the planned Bill on 12th July, provoking 17,000 people (official, i.e., underestimated figure) to take to the streets. From 17th July to the present, hundreds of thousands across the country have joined weekly demonstrations.

Angers (pronounced on-jay) is a city of 150,000 people known as les Angevins (on-jay-vans). The big town is around 200 miles south of Paris on the Loire River.

On the ominous date of 11th September, I documented the demonstration. It began at 3pm in Place du ralliement in the centre and ended as a march through the streets, blocking traffic and pedestrians alike:https://videopress.com/embed/0m775QQv?preloadContent=metadata&hd=1&cover=1https://videopress.com/embed/hikqzddg?preloadContent=metadata&hd=1&cover=1

“Freedom not to be vaccinated (pun roughly translates as ‘pass on the pass’), neither exploited nor starved, nor expelled, nor labelled, nor clubbed, nor blinded.”

The latter is in reference to the increasing brutality of the French police whose “non-lethal” weapons had, by 2019, taken out the eyes of 24 populist Gilets jaunes (Yellow Vests) who are protesting the neoliberal order represented by Macron.

The ACCS supports revolutionaries “from all walks of life, associations, unions [and] politicians.” Their call for convergence is aimed at tackling “a single enemy … the ‘system.’” For nationalists, it is globalisation, for Marxists capitalism, and so on.

As Politico correctly pointed out in an article about the wider national protests, the motives are many: personal freedom, freedom for others, freedom to get vaccinated, and freedom to oppose vaccination.

A university teacher in his mid-50s who did not want to be named told me that, while members of his profession had not yet been mandated for the vaccine, the pass sanitaire is “authoritarian, useless and dangerous … It leads to outrageously ridiculous situations like people having to show a pass to sit on a terrace on the beach when they don’t need any in the Parisian metro during rush hour, which is just an insult to intelligence.”

He said that the pass was dangerous because “it leads people to accept arbitrary destitution of their freedom in the name of health security, and paves the way to a Europeanised version of the Chinese control society, with good citizens who can travel, go to the restaurant and cinema, and bad ones who have to stay home, are ridiculed by mainstream media and blamed by the government.”

As I write, the wires report that 3,000 nurses, careworkers, and hospital staff have been suspended without pay for refusing the jab. Health Minister, Olivier Véran, says: “many have decided to get vaccinated as they see that the vaccination mandate is a reality.”

One doctor, 38, who has attended demonstrations, explained to me that the Regional Health Agency, Agence Régionale de Santé, decreed that all medical professionals be jabbed by 15th September.

Asking how this was legal, she said that the mandate was “not medically justified. It pushes us into a role … Caregivers have to be vaccinated to be an example for the population. I don’t want to be.”

Making people healthy is this doctor’s vocation and her only means of supporting her young family. Even before the mandate, colleagues had voluntarily taken the jab, leaving her feeling professionally isolated.

Luckily, on vaccination day, the doctor experienced no physical side effects other than fatigue. “Mentally, I felt angry,” she said.

She emphasised the need to do something about the pandemic, but voiced her concerns over the safety of the jab, particularly for younger people. “I’m against the pass sanitaire because the vaccine is not well studied [in terms of] the risks and benefits.”

Indeed, shortly before the demonstration, mainstream media reported on a preprint study suggesting that boys under 15 are more likely to die from vaccine injury than from COVID.

The doctor concluded that vaccines also put evolutionary pressures on the virus, risking that SARS-Cov-2 mutates to survive. “A lot of people who do the demonstration are vaccinated, but they are against the pass,” she said.

“Nobody’s a terrorist. They are regular people. A lot of women demonstrate.”

A retired nurse, 63, who again did not wish to be named, said that when it comes to the pass sanitaire, the vaccine is not the issue. “Every person should be able to make the choice for themselves. It’s supposed to be a choice since our government told us that it is not compulsory when it is obvious that it is unavoidable.”

Like the doctor, the nurse said that many protestors had been vaccinated but march in solidarity with the unvaxxed. “Most are there because it is unbearable discrimination and a hypocritical way of pretending it is not mandatory. It’s a kind of lie.”

It is unlikely that electoral politics will end the mandate. The elite-funded parties are in favour of the pass sanitaire. Marine Le Pen might end the health passport system, but her party will impose a different kind of fascism on France, one that might result in low-intensity civil war against the Muslim minority. The left is too split to get behind Mélenchon.

The direct actions of the demonstrators are symbolic, but ultimately impractical because those opposing the pass are in the minority.

The only solution seems to be to network with fellow anti-pass activists to form an ad hoc subculture: musical events where friends jam without authorisation, the formation of unlicensed bars and cafés, large gatherings where people bring food to share.

The medical apartheid gives protestors an opportunity to build their own system, albeit on a smaller scale.