“Give Us Our Jobs Back Ya Dog”: Australians Have Had Enough. 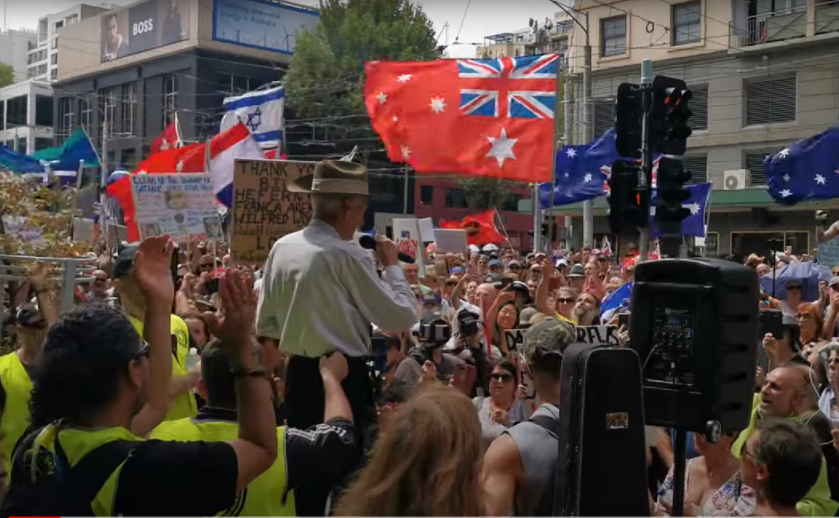 The disruption to Australian life continues to grow worse; with supply chains broken, supermarket shelves emptying, and suburban parks quiet as a confused and anxious people shelter in place. A dark evil spreads across the land. Everyone is vulnerable. The rich get richer; and the rest remain bewildered, with thousands of teachers, nurses and police losing their jobs for refusing to have the “the jab” while at the same time a truly massive worldwide controversy is now enveloping the entire Covid vaccine rollout.

Any Australian with five minutes to spare and two neurones to rub together can work that out.

While the mainstream media remain the shadow puppets of the powerful, their utter failure to report accurately on the events of the past two years or the controversies surrounding lockdowns, masks and vaccine mandates has driven many people into the arms of independent media; which is now far more vibrant and informative than the traditional outlets. It would have been better for everybody if the MSM had just told the truth, and reported the dimensions of the debate truthfully.

The derogation of the mainstream media’s civic duties has profound consequences. The rot began long ago; with Australia mimicking the CIA program known as Mockingbird to infiltrate and control mainstream media.

In the previous two years of Covid panic this whole rotten process has gone into hyperdrive; with the government offering backdoor funding and tax concessions to mainstream media to peddle their Covid messaging. Loyal to their funding sources, trapped by their failing business models and declining revenue streams, the mainstream media has lost all impartiality, and thereby credibility. Their power is declining precipitously. As usual, the Australian government has shot itself in the foot. Tell a younger generation that journalism used to be a respected reputation, and they look at you like you’re from Mars.

You cannot censor everybody. And in the age of the internet, when anyone can pick up a phone and tell the world what they think, the voices of discontent grow wilder, stronger and more determined by the day.

Don’t believe us. Here is an absolutely classic example.

David Oneegs’ Aussie Chat channel on Telegram has more than 62,000 followers and attracts hundreds of comments and shares every day.

It bears no resemblance to traditional media. And it’s highly successful.

This is his powerful take on Australia Day.

Below are just a few of the links to some recent coverage, in these frightening times.

Many have commented on the riven nature of this era, as if there really was “an evil afoot”. A dark wing flies over all of us. And we should be prepared.

For a long time only a few spoke out.

Now everybody is speaking out. And Australians have had enough.

#truthbug in the thick of it again. Melbourne today.heading to Canberra tomorrow to hopefully make australian history 🙂

The first part of the march, from Parliament house to DHHS. ‘Where Are They’ was the name of the event, referring to institutions which have abandoned their obligations to the people. Big day, lots of footage!

THE REAL RUKSHAN ON AUSTRALIA DAY.

He has been one of the most prominent and insightful documenters of this era; and his work has become invaluable in understanding what is going on in this country.

From his Facebook page: Thank you Australia. A beautiful nation of endless opportunities & boundless possibilities. When I was a young child, my parents felt that in their circumstances they had no other choice but to come to this land, leaving behind their lives in South East Asia for a better future for their children in Australia. It didn’t dawn on me until much later in life just how much their sacrifice would change the trajectory of my own life. Today I wake up, blessed to know that I don’t have to make the same difficult choices my parents did.

Perhaps the greatest tribute to Australia is that it is a home for people from all over the world who have had to at one point or another, seek refuge outside their ancestral homelands in the pursuit of a decent life and happiness. Although history can be complex, it should not be overlooked when we consider the present and the future. When I look at the history of Australia and then consider my place here, knowing full well the struggles encountered by the traditional custodians of this land, it is hard to reconcile whether I am a guest, invader or Australian.

The sacrifices and suffering of all peoples that have struggled before us on this land and around the world, should push those of us here today to honour their memory by continuing to work together to build a greater Australia that can continue to give hope for a better tomorrow for all Australians.

Alex Antic: A vigorous and investigative media is critical to the wellbeing of any free, liberal democracy like Australia. For a democracy to function well, there must be a genuine exchange of ideas in the public sphere. Mainstream media outlets such as newspapers, radio, and television have traditionally played a key role in facilitating these discussions.

Over time, these big media corporations, which have come to be known in the Internet era as the ‘legacy media’, have become increasingly one-sided in their coverage of key issues and debates, and the scope of public debate has narrowed to suit the agendas of political and corporate elites rather than the public.

For example, anyone who is publicly opposed to mandatory vaccination, as I am, is labelled an ‘anti-vaxxer’ – a misleading insult used to attack one’s character and avoid engaging in a constructive debate. I have only criticised mandatory vaccination, yet this is more than enough, it seems, to warrant the legacy media’s use of this slur.

Almost all of Australia’s big media outlets repeat the same politically correct mantras about every major issue, and those who hold contrary views are often ignored, dismissed, ridiculed, or regarded as dangerous.

This disturbing trend has never been more apparent than over the past two years, in which the legacy media has manipulated the public into a state of perpetual anxiety over something that is not dangerous to most people. Furthermore, they have drastically understated, if not completely ignored, the serious concerns about coercion and intrusion into the private lives of citizens.

One example of this is their ubiquitous support for vaccine mandates, which many Australians oppose for a variety of reasons that must be taken seriously. People who think critically about vaccine mandates realise that they raise a plethora of complex questions that require sound reasoning to navigate and involve moral judgments. What role should government play in our personal medical decisions? What authority does the government have to vaccinate children against their parents’ will? What right does the government have to restrict the movements and career prospects of people who don’t want to be vaccinated? What sort of precedents are being established by this authoritarian creep, and where will it lead? These questions require thoughtful answers, but almost all journalists in legacy media corporations refuse to ask them.

Instead, they busy themselves with ridiculing so-called ‘anti-vaxxers’ (very few of whom are opposed to vaccinations in general), provoking fear about every death associated with Covid, and continuing to tout the vaccines at every possible moment despite their lack of efficacy in preventing transmission. This is not journalism or honest, facts-based reporting – it is propaganda, and many people who are familiar with the media of communist regimes sense the similarities with our major networks given their uniformity and demonising of dissenters.