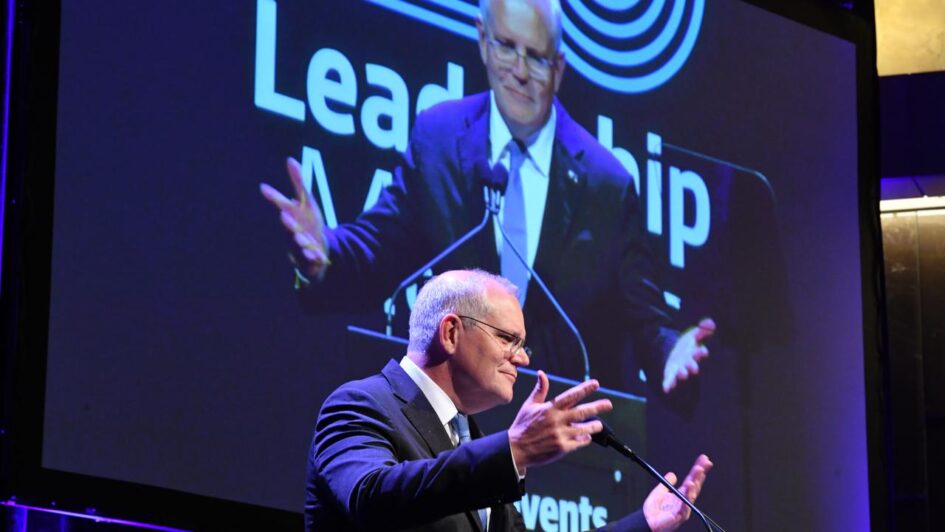 It may be the only campaign tactic they have left, and it’s a lie, but the media laps it up and Scott Morrison and Josh Frydenberg are flogging it hard. That’s the claim that the Coalition are “superior economic managers” and Labor can’t be trusted to run the economy. Alan Austin looks at International Monetary Fund data and puts the case that Labor have been far superior economic managers.

This week, when Scott Morrison and Josh Frydenberg were intensifying their message that “Australia’s economic recovery was leading the world”, the International Monetary Fund (IMF) released a batch of documents which indicated, “No, it isn’t”.

It was exactly the data the Australian media needed to test the Coalition’s bold claims once and for all – right in the middle of the election campaign. Unfortunately, no mainstream economics writer appears to have found this file. Strange.

The IMF’s World Economic Outlook Database for April 2022 presents easily accessible global data going back to 1980. No calculations or analysis are needed. We simply read numbers from the screen. (A lot of numbers now follow, but they are worth reading. Promise!)

Gross domestic product in US dollars

When the Rudd Labor Government won office in 2007, Australia’s gross domestic product (GDP) was $US949.0 billion. This measure of the nation’s total income ranked 15th among the 176 countries (populations above 250,000) on the IMF database.

This GDP file opens as an Excel spreadsheet, so it is quite simple to rank all countries from highest to lowest with a couple of mouse clicks.

Ahead of Australia in 2007 were the strong capitalist nations Japan, USA, Germany, the UK, France, South Korea, Italy, Spain and Canada, plus the large emerging economies China, India, Russia, Mexico and Brazil. All had much higher populations than Australia.

In 2008, as the global financial crisis whacked most of the developed world, Australia overtook South Korea to rank 14th. Then in 2009, Australia snuck ahead of Mexico and in 2011 passed Spain to reach twelfth. Impressive.

After Labor lost office, the trend immediately reversed with South Korea and then Spain overtaking Australia. By 2019, before the pandemic, Australia ranked 14th again. The latest level is 13th, just ahead of Iran and Spain.

Gross domestic product per capita in US dollars

Gross domestic product, above, measures the total income for the entire nation, so obviously high-population countries like China and India will have greater GDP than Australia or Switzerland. So the more important measure is GDP per person which, fortunately, the IMF also records for 161 countries.

Towards the end of Labor’s last term of office, in 2012 and 2013, Australia ranked a creditable sixth on this measure globally, behind only the small rich nations Luxembourg, Norway, Qatar, Switzerland and Macao.

After the Coalition won office in 2013, Australia’s income per person tumbled badly. In 2014, Australia was passed by Denmark. Then in 2015 Australia fell behind the USA, Ireland, Singapore and Iceland to rank eleventh. The latest column has Australia still at eleventh, having been overtaken by Brunei but ahead of Macao.

In Labor’s last year, Australia’s unemployment rate as measured by the IMF ranked 25th out of 106 countries.
Ranking tumbled to 40th for the next four years after the Coalition took office in 2013, then fell further to 44th in 2018 and 45th in 2019. Australia recovered slightly in 2020 to rank 42nd, then a much better 31st in 2021 – but still below our global ranking a decade ago.

Again, Australia has fallen badly since, ranking 50th in 2021. Nowhere near the leaders.

Government structural balance reflects the long-term sustainability of public finances – revenue, spending and savings – taking into account the economic cycle. The IMF measures this over time as a percentage of potential GDP for eighty countries. The higher the better.

Again, the data shows sharp deterioration under the Coalition. In 2013, Australia ranked 43rd. This slipped to 48th in 2014, to 52nd over the next two years, then 62nd in 2019 and 70th in 2020. The latest numbers, for 2021, have Australia ranked 74th. That is sixth-last in the world, reflecting wasteful spending, corporate tax not collected, record budget deficits and ballooning debt.

Finally for this analysis, the IMF ranks 173 countries on general government gross debt as a percentage of GDP. Australia ranked 56th in 2012 and 57th in 2013. That sounds fairly low, but most of the countries ahead were poor developing countries carrying very little debt. Australia actually ranked fourth for low debt among the rich OECD members in both those years.

Quite clearly, economic outcomes under Labor have consistently been much better than under the Coalition in the prevailing global conditions. There is no basis for the Morrison Government and its media backers to assert they are better money managers, let alone claim Australia “leads the world”, as Morrison and Frydenberg do incessantly. The evidence overwhelmingly proves the opposite.