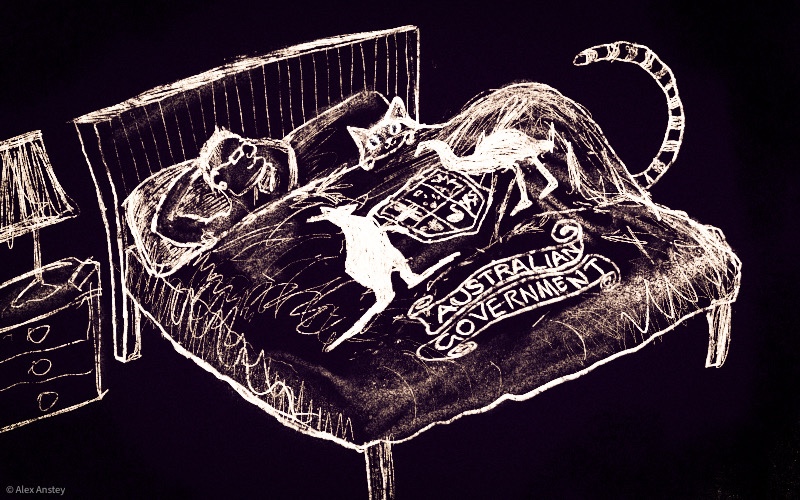 The Government has grovelled to its billionaire donors yet again, killing a Senate amendment to force the richest Australians to disclose their financial statements. Michael West reports on the crusade by independent senator Rex Patrick to hold the Morrison Government and its corporate mates such as the Packers, Murdochs and Lowys to account while putting property giant LendLease to the sword over its JobKeeper rorts.

If there were any measure, any damning proof, that the government of Scott Morrison puts the interests of the Liberal Party’s super rich donors above the interests of ordinary citizens, this was it.

Independent senator Rex Patrick had put up Treasury Laws Amendment (2019 Measures No. 3) Bill 2019 on Friday. The amendment was passed by the Senate. The cross-bench, the Greens and Labor all voted in favour despite feeble attempts by Government senators to argue against it.

Yet the amendment was swiftly voted down by the Liberals and Nationals this week when the Bill got to the Lower House.

Centre Alliance senator Rex Patrick, along with the Greens, has been putting the heat on the Government and its crony capitalist supporters. Besides moving to close the “grandfathering” exemption which constitutes an egregious mates-deal for Liberal Party donors, Patrick and Greens Senator Peter Whish-Wilson have been naming corporate names to try to force the Government to end the widespread rorting of the JobKeeper scheme by the Big End of Town.

The likes of Mirvac and LendLease, as well as other top 200 listed companies have been claiming JobKeeper for their workers despite the scheme being available for big companies only if their revenues have fallen by 50 per cent or more.

Instead of allowing directors to cower behind the corporate veil and take no responsibility for the actions of their corporations, as is their legal duty, Patrick has been openly discussing their activities in his speeches in the Upper House.

The latest is chairman of LendLease Michael Ullmer. LendLease has been rorting the JobKeeper scheme for millions of dollars. As pointed out in Rex Patrick’s speech it has also:

* paid no income tax in Australia during that time,

* engaged in a six-year tax scam in its Retirement Village business.

After the speech, LendLease responded to Patrick:

In fact, via its retirement village tax rort, it has published incorrect financial statements for six years. The publication of accounts which are not in accordance with Accounting Standards is an offence under the Corporations Act. Therefore LendLease is a serial lawbreaker.

While the LendLease response to Senator Patrick is a masterclass in corporate spin, it did shed some light on the size of the JobKeeper grift.

The letter noted the company had claimed JobKeeper for 15% of its workforce of 9,200 employees. At 13 fortnights times $1500, the amount rorted from taxpayers would stand at $26.9 million.

For the record, it is worth publishing Rex Patrick’s Quiet Australians address here:

In the Senate sittings that took place before coronavirus impacted our country, I began a series of speeches that aimed to put the spotlight on a number of Australian business people little known to the broader community. These quiet Australians rarely make the headlines even in the business pages of our newspapers. They often shun the limelight, but they deserve scrutiny and attention because their actions profoundly affect our nation for good or for ill.

Tonight I want to turn the light onto another one of these quiet Australians, Michael Ullmer, chair of the board of Lendlease, that huge construction, property and infrastructure conglomerate headquartered at Barangaroo, near Sydney’s Darling Harbour. Mr Ullmer is not a household name. Outside of Australia’s business, political and cultural elites, few Australians would know of him. Ullmer is a corporate numbers man. Born in London in 1951 and with a mathematics degree from the University of Sussex, he is a fellow of the Institute of Chartered Accountants, the Financial Services Institute of Australia and the Australian Institute of Company Directors.

Ullmer started out in business in 1982 with the accounting firm KPMG and moved to Coopers & Lybrand a decade later. He joined the Commonwealth Bank in 1997 and the National Australia Bank in 2004, rising to become NAB’s deputy chief executive officer from 2007 until August 2011, when he retired from the bank and joined the board of Lendlease, becoming the chair in November 2018. Ullmer is also the chair of the Melbourne Symphony Orchestra, a position he’s held for some 14 years, and he’s a trustee of the National Gallery of Victoria. In January he was made an Officer of the Order of Australia. The citation for his AO reads:

For distinguished service to the performing and visual arts through a range of roles, and to the finance and banking industry.

Lendlease has also emerged as a major contractor to the federal government. The AusTender database shows that since 2016 until May this year, Lendlease had won federal government contracts worth more than $661 million. That includes $110 million in a contract for construction here at Parliament House. However, most of the federal government work contracted to Lendlease, some $534 million worth, has been awarded by the Defence department for projects including development of the Osborne shipyard in Adelaide and the $427 million HMAS Watson redevelopment at South Head in Sydney. And that’s not all: just last week Lendlease was awarded another $365 million contract for the first tranche of works at HMAS Stirling in the Australia Maritime Complex in Western Australia. This brings the total of Lendlease’s federal government contracts since 2016 to over a billion dollars.

Now, against that background, Senators, one might ask what contribution Lendlease makes in terms of corporate income tax. After all, those revenues support many things that all Australians and Australian businesses like Lendlease rely on: defence and national security; law enforcement; the national healthcare system; the social security system; aged care and disability pensions; and education and training. So how much does Lendlease contribute through corporate income tax? I can ask Senator Brockman who’s the chair of the economics committee, and we’ll find that the answer is zero. They pay absolutely nothing in corporate tax.

According to figures compiled by investigative journalist Michael West and from the Australian tax office’s tax transparency reports, over the last five years from 2013-14 to 2018-19 the company generated $43 billion in revenue and in that period they didn’t pay a brass razoo in tax. Now, they realised a profit before tax of more than $5 billion, delivered an annual return on equity for security holders of 11.7 per cent and returned to security holders over $2 billion dollars—again, no corporate tax paid.

As Michael West points out, that’s no mean feat for an Australian based company without the usual multinational means and ends to shift its profits offshore, but Lendlease has managed that and they’ve done so while repeatedly denying that they’ve been participating in tax evasion or aggressive tax planning. Yet, one way or another, they’ve minimised their corporate income tax liabilities on a massive scale. One significant element in Lendlease’s retirement village business—which, as of a year ago, generated over a billion dollars in tax deductions while still turning a good profit—is that Lendlease has cunningly developed a tax minimisation strategy in which it swapped the contractual arrangements with its retirement village residents and lease premiums to loans and harvested sufficient tax deductions to cover the whole operation for five or six years.

The tax office has been looking at this dodge for some time. Two years ago, the ATO told a Senate inquiry that there is a suggestion that there is somehow a double dip in having some sort of depreciable cost from the assumption of liabilities and getting a reduced capital gain when things are sold. Last October, the ATO published a draft ruling confirming that no-one, including Lendlease, can double dip in this way, but the consultation process is taking a while and we haven’t seen a final ruling.

Also, in the midst of a pandemic crisis, Lendlease’s retirement villages have continued their operations, yet remarkably the company has been able to put its hand out for more taxpayers’ money through the JobKeeper program. Lendlease’s lawyers have sussed out a loophole. So, despite basically continuing to thrive, they’ve managed to pull $15 million from the taxpayer. They haven’t paid any tax, but they’ve managed to pull $15 million from the taxpayer to support their workforce during the COVID crisis. No-one making that sort of money and not paying tax should be taking money from the taxpayer.

Michael Ullmer has, of late, encountered negative publicity relating to his position as the chair of the board of Melbourne Symphony Orchestra. In April, the board stood down all its MSO musicians and put them on the JobKeeper program, despite the fact that they’d been negotiating to take a 50 per cent pay cut. This prompted calls for the Victorian government to step in and dismiss the board, including the chair. With a clear sense of entitlement, Ullmer replied that he wasn’t going anywhere and, in a rare interview, likened his tenure on the MSO board to the Eagles song ‘Hotel California’.

It’s a moot point whether a corporate tax dodger such as Michael Ullmer should serve in any public role. There’s no good reason why he should use work relating to the arts as a reputational screen for his amoral corporate activities. The ATO may well catch up with Lendlease. The government should take a close look at its procurement practices and especially at the need for greater tax transparency for its large contractors. How can it be acceptable that Lendlease can secure over a billion dollars in government contracts while not paying a cent in corporate tax? Clearly, it shouldn’t.

And, on another matter, there really should be a ban on awarding Australian honours to tax parasites such as Michael Ullmer, who was awarded an AO while making a mockery of our taxation system. In Ullmer’s case, AO really ought to stand for ‘avoidance order’ because that’s his major contribution as the chair of Lendlease—corporate tax avoidance on a grand scale. The Lendlease chairman hasn’t given distinguished service to our nation; he’s just an amoral number-cruncher whose career has just involved profit without social conscience. He ought to be stripped of his AO.

In closing, Lendlease’s code of conduct, which applies to all directors and employees, has a test: ‘Would I be willing to see what I’m doing, or what I’m about to do, described in detail on the front pages of a national newspaper to be read by family and friends?’ Perhaps they should add ‘or in a Senate speech’.

Michael West established michaelwest.com.au to focus on journalism of high public interest, particularly the rising power of corporations over democracy. Formerly a journalist and editor at Fairfax newspapers and a columnist at News Corp, West was appointed Adjunct Associate Professor at the University of Sydney’s School of Social and Political Sciences. You can follow Michael on Twitter @MichaelWestBiz

This story was originally published at Michael West Media and is reproduced here with their kind permission.