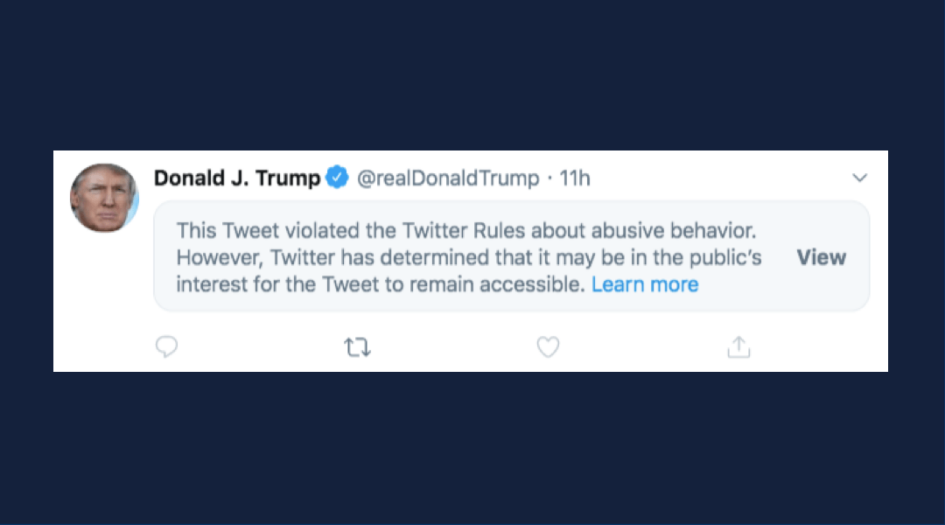 Twitter has censored a post by the president of the United States, this time for “a threat of harm against an identifiable group.” This despite the fact that this president routinely uses the popular social media platform to threaten to drop explosives on people in other countries without interference.

“We’ve placed a public interest notice on this Tweet for violating our policy against abusive behavior, specifically, the presence of a threat of harm against an identifiable group,” Twitter stated on the platform. “Per our policies, this Tweet will remain on the service given its relevance to ongoing public conversation. Engagements with the Tweet will be limited. People will be able to Retweet with Comment, but not Like, Reply, or Retweet it.”

“There will never be an ‘Autonomous Zone’ in Washington, D.C., as long as I’m your President,” Trump’s censored tweet reads. “If they try they will be met with serious force!”

I’ve been writing all month about the brutal authoritarian crackdown America’s militarized police state has been inflicting upon US protesters who’ve been demonstrating against police brutality these last few weeks, so obviously I object to the threat of further force upon these same protesters by this same armed goon patrol. But Twitter did not censor Trump’s tweet because of any “threat of harm against an identifiable group.”

Know how I know? Because Twitter has been allowing Trump to make far more deadly threats throughout his entire administration.

Earlier this year, for example, Trump threatened to bomb 52 Iranian sites, “some at a very high level and important to Iran and the Iranian culture”, if the Islamic Republic responded militarily to his insane drone assassination of its top military leader. The president explicitly threatened that “those targets, and Iran itself, WILL BE HIT VERY FAST AND VERY HARD.”

Or in April of 2018 when Trump used the platform to issue a threat that he actually followed through with, tweeting “Russia vows to shoot down any and all missiles fired at Syria. Get ready Russia, because they will be coming, nice and new and ‘smart!’” Trump did indeed order airstrikes upon the Syrian government days later.

Or who could forget Trump repeatedly threatening North Korea with nuclear holocaust, tweeting “North Korean Leader Kim Jong Un just stated that the ‘Nuclear Button is on his desk at all times.’ Will someone from his depleted and food starved regime please inform him that I too have a Nuclear Button, but it is a much bigger and more powerful one than his, and my Button works!”

Twitter consistently allows its platform to be used to issue explicit threats of western imperialists against targets of western imperialism, like when it allowed Senator Marco Rubio to openly threaten to do to Maduro in Venezuela what the US and its allies did to Muammar Gaddafi in Libya. Gaddafi was brutally mutilated to death in 2011 by empire-backed insurgents under NATO air cover following a catastrophically devastating intervention that was launched on false humanitarian pretexts.

These are all clearly “a threat of harm against an identifiable group.” But, because it’s a threat to inflict mass murder upon foreigners and not a threat to use teargas and batons on Americans, Twitter is fine with it.

This is openly built into Twitter’s terms of service; the social media giant waves these deadly threats through using the dismissive and carefully selected phrase “saber-rattling”, despite the fact that this president has followed through with such threats and has demonstrated an absolute willingness to use deadly military force.

“Presently, direct interactions with fellow public figures, comments on political issues of the day, or foreign policy saber-rattling on economic or military issues are generally not in violation of the Twitter Rules,” Twitter says.

Twitter’s increasing censorship of Donald Trump will not hurt him politically, it will only inflame his support base who see themselves as the protectors of a president who is under constant attack by communists, Antifa, Satanists and pink-haired genderqueers who want to destroy statues of Jesus and then marry their sex toys in your local church. In fact the very last person in the world we should be worried about being censored is the man whose incredibly powerful office comes with its own built-in bully pulpit.

Rather, what we should be worried about is monopolistic and agenda-shaping Silicon Valley tech corporations enacting censorship with ever-increasing brazenness while demonstrating a clear and undeniable loyalty to the imperial war machine.

The internet is playing a larger and larger role in the way people inform themselves about what’s going on in the world, and the lenses through which they perceive it are becoming more and more biased in favor of the bloodthirsty US power alliance.