All Caretaker, no Responsibility: how a Dying Australian Government slipped Freebies to its Mates 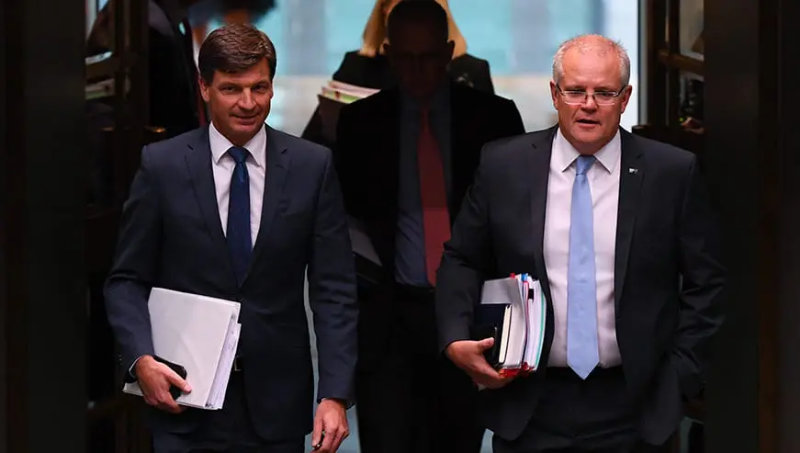 On its way to electoral oblivion, the Morrison government kept the dollars flowing to select beneficiaries, in defiance of the 70-year-old parliamentary “caretaker” convention, writes #Mate.

On May 16, five days before the election, the then Minister for Industry, Energy and Emissions Reduction, Angus Taylor, announced a $30 million grant to Boral to “explore the feasibility of developing a carbon capture plant in the Southern Highlands.” Given the energy policies of the Labor and the Coalition were very much at odds, this grant appears to have been a breach of the caretaker conventions. (Curiously, Taylor’s facebook video about it has since been deleted, but the announcement features proudly on the Boral website.)

Call them the $600,000 (an hour) men (and women). That’s how much taxpayer money the Morrison government lavished on grants every hour during the six long weeks of the election campaign.

A MWM investigation reveals that during the 2022 election the Morrison government approved hundreds of grants that ‘appear’ to be well outside the boundaries of a governing process that the major parties have observed for over seven decades.

It is called the caretaker conventions and they date back to the days of Robert Menzies, Australia’s longest serving prime minister. The conventions are a feature of Westminster-style democracies. This is why the Liberals’ contempt for the conventions is far more than just another rort or pork.

The answers to these questions when asked of both individual, category wide and program-wide grants leave us with the conclusion that the Coalition gave little, if any, concern with compliance to caretaker conventions.

The disregard for democratic convention of the caretaker period may well be the result of the education provided by the PM&C.

The PM&C education pack makes it clear the caretaker convention isn’t law, and adhering to the convention was a matter of personal judgement, common sense, or whether there is some form of precedence.

But it is far more than a convention.

Most Liberals would say Robert Menzies is the greatest conservative prime minister Australia has had. Regardless of affiliation, every politician would recognise the establishment of caretaker conventions as one of his major legacies.

His instruction to his ministers prior to the 1951 election set the precedent for what we now call caretaker conventions. The aim was to level the playing field during election campaigns and to not bind a new government to a previous government’s decisions. Menzies’ precedent-setting letter read:

I should also be glad if you would note that whilst continuing to take whatever action you deem necessary in connection with the ordinary administration of your Department, you should not make decisions on matters of policy or those of a contentious nature without first referring the matter to myself.

The convention brought together the Commonwealth, state and local government politicians. Resolution 32 as it was recorded, provided a definition of the caretaker convention that was agreed by all, it read as follows.

No important new initiative is taken, and no appointment to high office is made, by a government in the period immediately prior to a general election for the House of Representatives unless it can be publicly justified as necessary in the national interest.

Prior to 1987 election the government added greater detail to the caretaker conventions, producing a two page document titled “Handling of Government Business During The Election Period”, having grown to 17 pages.

With regards to grants, it states that during the caretaker period, the business of government continues, and ordinary matters of administration still need to be addressed, [but] the caretaker conventions aim to ensure the incumbent governments actions do not bind an incoming government or limit its freedom of action. Further, that the government [must] avoid making major policy decisions that are likely to commit an incoming government, making significant appointments, and entering major contracts or undertakings.

The 2022 election caretaker – a strange sequence

The approval of grants during the 2022 caretaker period are not only breathtakingly brazen, but give us some insights into the chaos in Coalition. The chaos saw grant announcements being made and promoted in the media before the grant was even approved.

Two large grants in Townsville were approved 16 days into the caretaker period on April 27, however news stories of the grants appeared in the press two weeks earlier. So, what is the order? “Promote then approve” or “approve then promote”.

The sheer number of grants restricts the ability to undertake a deep investigation, but selecting a few categories of grants identifies peculiar patterns.

Remembering the caretaker principles include, not “entering major contracts or undertakings” or making decisions resulting in “committing an incoming government”.

Five years and $170m to the Brotherhood of St Laurence – HIPPY:

The aged-care sector has been in decline for years. We’ve had a royal commission, Covid vaccination failures, Covid deaths, staff retention payments, in excess of 140,000 shifts not being filled each week and the hundreds of Defence Force staff now working in aged care.

Over 600 grants with a duration longer than the next term of government were approved during the caretaker period. The total value of these grants was $261m.

A core principle of the caretaker convention is to not bind an incoming government. These 615 grants lock in grant programs and expenditure the Labor Party would likely have wanted to go on its own programs.

Term of next two governments 6+ years

It is hard to imagine how any grant with a duration of six years would be considered ”administration or business-as-usual” activities of a government. These grants might be assessed as meritorious against the criteria set by the Liberal government, however the policies of the incoming Labor government are substantially different and equally meritorious projects would exist when assessed against the Labor governments criteria.

This analysis assumes all grants have been published. Grants are required to be published within 30 days of approval. The frequency with which the 30-day rule has been breached, is yet another example of the Coalition treating rules as optional.

#Mate is a Twitter identity who tweets on matters of politics, business and hypocrisy. The identity of #Mate is known to Michael West Media but withheld for security reasons.