A New Exoplanet GJ 367b: An Iron Planet Smaller and Denser than Earth 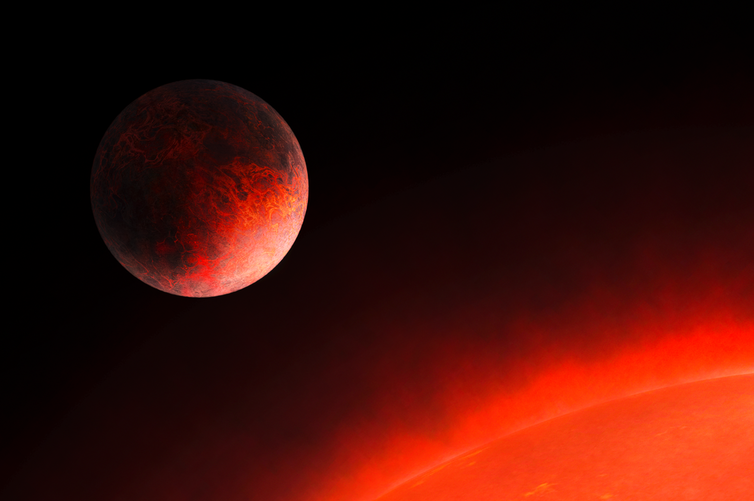 As our Solar System formed 4.6 billion years ago, small grains of dust and ice swirled around, left over from the formation of the Sun. Through time, they collided and stuck to each other. As they grew in size, gravity helped them clump together. One such rock grew into the Earth on which we live.

We now believe that most of the stars in the night sky are also orbited by their own planets. Astronomers have already found more than a thousand gas-giant planets – large, gaseous bodies similar in size to Jupiter. The focus now is on looking for rocky, Earth-sized planets. We expect that these will be similarly abundant but, being much smaller, they’re harder to find.

A new paper published in the journal Science documents the latest discovery of a small planet, assigned the catalogue number GJ 367b. This exoplanet was found by a team, of which I was a member, led by Dr Kristine Lam of the Institute of Planetary Research at the German Aerospace Center.

Members of the team noticed the first signs of GJ 367b in data from Nasa’s Transiting Exoplanet Survey Satellite, or Tess. Among the millions of stars being monitored by this satellite, one showed a tiny but recurrent dip in its brightness. This is the tell-tale sign of a planet passing in front of its star every orbit (called a “transit”), blocking some of the star’s light. The dip was only 0.03% deep, so shallow that it’s near the limit of what can be detected. That means the planet must be small, comparable to Earth.

Lam also wanted to learn about the planet’s mass. To do that, her team set about observing the host star at every opportunity with what’s called the High Accuracy Radial Velocity Planet Searcher, or Harps. This is an instrument attached to a 3.6-metre telescope at the European Southern Observatory in Chile. It was specially designed to find planets by detecting the slight shift in the wavelength of the host star’s light, caused by the gravitational pull of the planet. It took more than 100 observations to detect that shift, meaning that GJ 367b, besides being small, must also have a low mass.

Eventually, as observations with Harps accumulated, the researchers tied down the numbers: GJ 367b has a radius of 72% of Earth’s radius (to an accuracy of 7%), and a mass of 55% of Earth’s mass (to an accuracy of 14%). The measurements tell us this planet is denser than Earth. Whereas Earth has a core of iron surrounded by a rocky mantle, this planet is so dense that it must be nearly all iron, making it similar to Mercury.

Mercury orbits the Sun every 88 days. Blasted by fierce sunlight, the “daytime” side is bare rock heated to 430℃. GJ 367b is even more extreme. The recurrent transit dips tell us that it orbits its star in only eight hours. Being so close, the daytime side will be a furnace heated to 1,400℃, such that even rock would be molten.

So how did it come to be? It’s possible that GJ 367b was once a giant planet with a vast, gaseous envelope, like Neptune. Over time, that gaseous envelope would have boiled off, leaving only the bare core that we see today. Or perhaps, as it formed, collisions with other proto-planets (planets in the process of forming) stripped off a mantle of rock, leaving only the iron core.

GJ 367b is, of course, way too hot to be habitable. But it’s one of very few rocky, Earth-sized planets astronomers have found so far. Its discovery shows that we can both find Earth-sized planets around other stars and measure their properties. The task now is to find them further from their star, in the “habitable zone”, where the surface temperature would allow water to exist as a liquid.

But GJ 367b’s host star is a red dwarf, a star much dimmer than the Sun. And, with less heating from starlight, the habitable zone around red dwarfs is much closer in. Nasa’s Kepler spacecraft has already found planets in the habitable zone of red dwarf stars, and Tess promises to find many more.

The next step is to ask whether such planets have atmospheres, what those atmospheres are made of, and whether they contain water vapour. Even there, answers may soon be forthcoming. We’ve already found water vapour in the atmospheres of gas-giant exoplanets, and the James Webb Space Telescope, set to launch imminently, will attempt to find water on smaller, rocky planets.

As exoplanet discoveries continue apace, it is becoming feasible that we could, before long, prove the existence of a planet that has an atmosphere and a rocky surface, on which water is running freely.