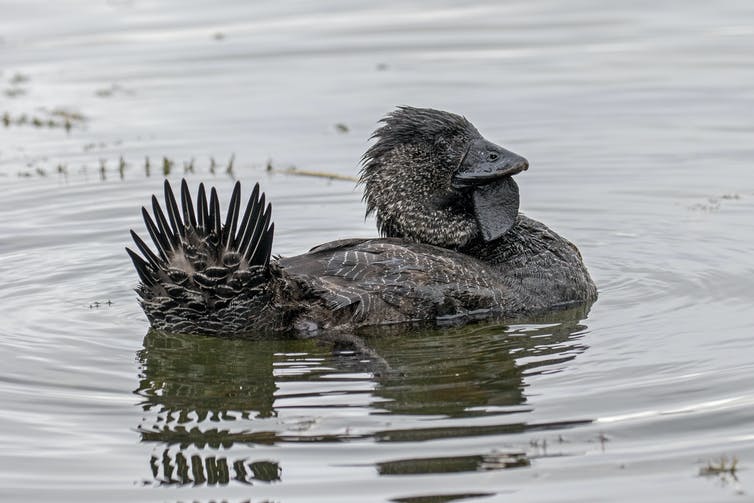 By Anastasia Dalziell, University of Wollongong and Justin A. Welbergen, Western Sydney University

A superb lyrebird called Echo at Sydney’s Taronga Zoo has produced a painfully realistic vocal rendition of a human baby crying. Lyrebirds are already world-famous for their astonishingly accurate vocal mimicry, but these new recordings show their abilities can still surprise.

The gate sound, at least, proved a hit with one of Ripper’s male colleagues who also ended up mimicking the sound. Excitingly, these recordings — originally from the 1980s and dug out from archives — provide the first material evidence of any duck species copying a sound in its environment, disrupting current understandings of the evolution of vocal learning in birds.

So what’s the big fuss about crying and swearing birds?

Why musk ducks are odd

Vocal production learning is a highly specialised trait that’s rare among animals. It requires flexible and sophisticated control over vocal production, and can be associated with enlarged regions of the brain relative to non-vocal learners.

For a long time, the only other animals known to possess similar vocal learning abilities to humans were parrots and male songbirds. But today, the musk duck joins a broad, but relatively small, list of non-human animals capable of vocal learning, including some bats, elephants, dolphins, whales and seals. Belatedly, we can now add female songbirds to the list of vocal production learners.

The loquacious “Ripper” was a captive-reared male musk duck at the Tidbinbilla Nature Reserve near Canberra. When he hatched, with the help of a foster bantam hen, he was the only musk duck there.

But even in the wild, musk ducks are odd. Male musk ducks are up to three times larger than females and have a distinctive bulbous lobe of skin hanging from their bills. Their name comes from the musky smell emitted by dominant males.

In the breeding season, males group together (in “leks”) and perform an exciting aquatic courtship displays for females, performing both day and night. Each male performs a structured, audio-visual display with his tail over his back, inflating his throat lobe, and splashing water while whistling loudly.

In the wild, male display whistles seem to form local dialects — a signature of vocal learning. But this doesn’t involve imitations of other species.

Ripper produced many elements of wild display, but would avidly display to people. His bizarre mimicry of anthropogenic sounds formed part of this display. https://www.youtube.com/embed/KiroDhDr5Js?wmode=transparent&start=0 Listen to Ripper say ‘you bloody fool’

The story of Ripper is part of a long scientific tradition. Captive-reared parrots and some songbirds mimicking human speech feature in ancient European writings, including the works of Aristotle and Pliny the Elder.

More recently, the possible complexities of parrot communication were explored in a pioneering study of “Alex”, the captive African grey parrot, who had a vocabulary of more than 100 words. https://www.youtube.com/embed/7yGOgs_UlEc?wmode=transparent&start=0 Alex video caption.

By and large, such accounts of human imitations involve a captive individual raised in isolation from others of its own kind, but in close association with a human caretaker. The human caretaker then becomes the social model for the captive bird’s vocal development.

So while these examples reveal an animal’s capacity for vocal production learning, they don’t show that wild animals imitate sounds from their environment. Indeed, very few of the animal species that mimic people in captivity produce anything other than their own, species-specific vocalisations in the wild.

However, this is not true of Australia’s lyrebirds and other avian vocal mimics.

Two lyrebird species are famous for the diversity and accuracy of their vocal mimicry: the superb lyrebird of the wet eucalypt forests of southeast Australia, and the Albert’s lyrebird of Australia’s subtropical east.

In captivity, male superb lyrebirds have been recorded mimicking anthropogenic sounds ranging from chainsaws, emergency vehicle sirens to this new recording of a crying human baby.

In the wild, both males and females are proficient mimics of the vocalisations and wingbeats of other bird species — and occasionally mammals. A single individual male superb lyrebird can even mimic a flock of alarm-calling birds.

Despite many rumours, it remains a bit of a mystery when and how often wild lyrebirds mimic sounds of human origin.

Lyrebirds aren’t the only ones. Australia is the lucky home to a surprisingly large number of songbird species that regularly mimic in the wild, from tiny thornbills to the large enigmatic bowerbirds that, even in the wild, occasionally produce startlingly accurate renditions of humans.

Read more: The mimics among us — birds pirate songs for personal profit

But not all mimics are what they seem. In a heartbreaking example, the mimetic song of the Regent honeyeater is both a consequence and a cause of the species’ decline. Wild males copy other species because there aren’t enough males left to pass on their song to the next generation.

Ripper the swearing musk duck, Echo the bawling lyrebird, and the forgotten songs of the Regent honeyeater show us how much we still have to discover about Australia’s extraordinary birds. Far from being the biogeographical oddity, Australian birds are still destabilising biological theory.

Ripper was a bird of the 80s, and we only know of his bizarre mimicry because Rippers’ recordist, Dr Peter Fullagar, was on a mission to establish a natural history sound archive for Australia. Like all good 80s singers, Ripper was recorded on cassette tape before Peter digitised it.

It’s only from historical archives that researchers could discover that original song of the Regent honeyeater was unique to the species and more elaborate than the songs of contemporary males. Simply listening to captive-reared birds or the dwindling singers in the wild is no longer enough to reveal the Regent honeyeater’s natural song: the baseline has shifted.

What other treasures lie gathering dust in forgotten sheds or library stacks? We must be quick, before those cassette tapes degrade too far to be heard.