Wild animals are evolving faster than anybody thought 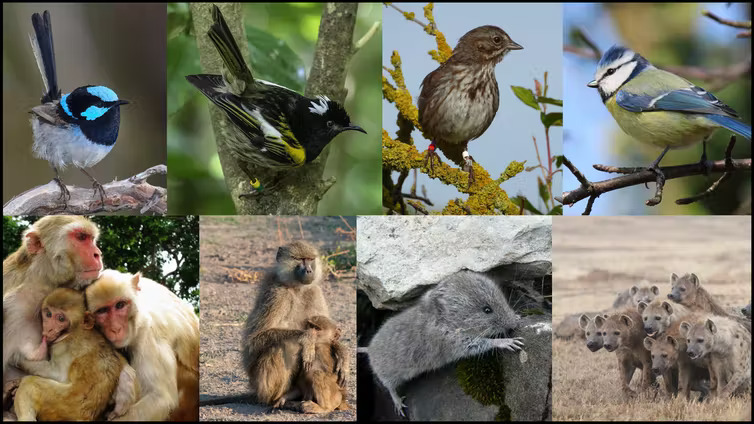 How fast is evolution? In adaptive evolution, natural selection causes genetic changes in traits that favour the survival and reproduction of individual organisms.

Although Charles Darwin thought the process occurred over geological timescales, we have seen examples of dramatic adaptive evolution over only a handful of generations. The peppered moth changed colour in response to air pollution, poaching has driven some elephants to lose their tusks and fish have evolved resistance to toxic chemicals.

However, it is still hard to tell how fast adaptive evolution is currently occurring. We also don’t know whether it has a hand in the fate of populations challenged by environmental change.

The tools of the evolutionary biologist: maths and binoculars

How do we measure how fast adaptive evolution is occurring? According to the “fundamental theorem of natural selection”, the amount of genetic difference in “fitness” to survive and reproduce among individuals across a population also corresponds to the population’s rate of adaptive evolution.

The “fundamental theorem” has been known for 90 years, but it has been difficult to apply in practice. Attempts to use the theorem in wild populations have been rare, and are plagued by statistical problems.

We worked with 27 research institutions to assemble data from 19 wild populations that have been monitored for long periods of time, some since the 1950s. Generations of researchers collected information about the birth, mating, reproduction and death of each individual in these populations.

Together, those data represent around 250,000 animals and 2.6 million hours of field work. The investment may look outrageous, but the data have already been used in thousands of scientific studies and will be used again.

Statistics to the rescue

We also developed a new statistical method that fits the data better than previous models. Our method captures two key properties of how survival and reproduction are unevenly distributed across populations in the wild.

First, most individuals die before breeding, meaning there are a lot of entries in the “zero offspring” column of the lifetime reproduction record.

Second, whereas most breeders have only a few offspring, some have a disproportionately high number, leading to an asymmetric distribution.

The rate of evolution

Among our 19 populations, we found that, on average, genetic change in response to selection was responsible for an 18.5% increase per generation in the ability of individuals to survive and reproduce.

This means offspring are on average 18.5% “better” than their parents. To put it another way, an average population could survive an 18.5% deterioration in the quality of its environment. (This may change if genetic response to selection is not the only force at play; more on that below.)

Given these rates, we found adaptive evolution could explain most recent changes in wild animal traits (such as size or reproductive timing). Other mechanisms are important too, but this is strong evidence evolution should be considered alongside other explanations.

An exciting result for an uncertain future

What does this mean for the future? At a time when natural environments are changing dramatically all over the world, due to climate change and other forces, will evolution help animals adapt?

Unfortunately, that is where things get tricky. Our research estimated only genetic changes due to natural selection, but in the context of climate change there are other forces at play.

First, there are other evolutionary forces (such as mutations, random chance and migration).

Second, the environmental change itself is likely a more important driver of population demographics than genetic change. If the environment keeps deteriorating, theory tells us that adaptive evolution will generally be unable to fully compensate.

Finally, adaptive evolution can itself change the environment experienced by future generations. In particular, when individuals compete with each other for a resource (such as food, territory or mates), any genetic improvement will lead to more competition in the population.

Our work alone is insufficient to draw predictions. However, it shows that evolution cannot be discounted if we want to accurately predict the near future of animal populations.

Despite the practical challenges, we are thrilled to witness Darwinian evolution, a process once thought exceedingly slow, acting observably in our lifetimes.